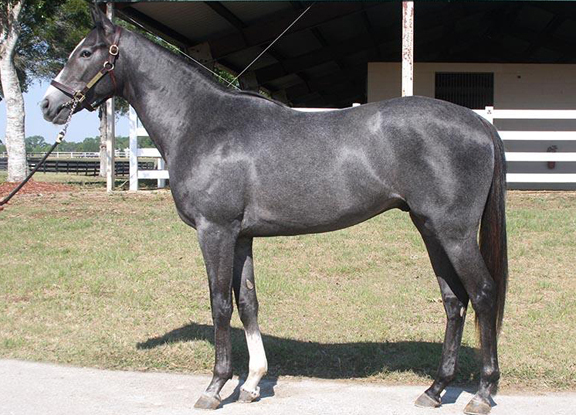 In this continuing series (click here for the first installment featuring subsequent GISW and 'TDN Rising Star' Paradise Woods), TDN's Senior Editor Steve Sherack catches up with the connections of promising maidens to keep on your radar. In this edition, colts by Frankel (GB) and Tizway–both second on debut–are featured.

Shelved after finishing a promising debut second behind a subsequent stakes winner sprinting on the Saratoga lawn Aug. 14 (video), Gidu (Frankel {GB}–Manerbe, by Unbridled's Song) could make some noise this winter at the upcoming Gulfstream Park Championship meeting.

The gray, sent off at odds of 2-1, battled on the front end that day through a hot opening quarter in :21.58 and gained command after taking a solid bump from a rival at the top of the stretch. He couldn't, however, withstand a smart late rally from next out Fasig-Tipton Turf Showcase Juvenile S. hero Snapper Sinclair (City Zip), who went on to win by four lengths.

“He's always shown very good ability since day one. He ran second in a nice maiden first out at Saratoga and ran very hard and battled through the whole stretch. He came out of the race with a bruised foot and fever and we just wanted to give him a little time off.”

Bloodstock agent Justin Casse signed the slip on Gidu as a yearling at last year's Arqana Deauville August Sale, going to €410,000 on behalf of the Zayat family. Produced by a winning half-sister to GISW and producer Zoftig (Cozzene), Gidu is a half-brother to GIII Seaway S. winner Marbre Rose (Ire) (Smart Strike). Manerbe's yearling filly by Shamardal brought €450,000 from Solis/Litt at this summer's Arqana Deauville August Sale. The Zayats purchased another offspring by the mighty Frankel earlier this year, acquiring the €1.6-million topper from the Goffs Orby Sale.

Gidu has posted a pair of works at trainer Todd Pletcher's Palm Beach Downs base this month, including a four-furlong move in :49.17 (5/22) Nov. 25. He could return to action in about 30 days, Zayat reports.

“He comes to hand pretty quick–a couple of more works and he should be ready,” Zayat said. “Todd is very happy with him so far and he's doing everything you'd like to see. The way he trains, I don't want to say he's only restricted to turf racing because he goes over the dirt pretty well, too. We'll see. He's very exciting. God willing, his next race at Gulfstream will be his maiden breaker.”

While a series of “little niggling things” delayed the debut of Backyard Heaven (Tizway–Cappagh Strand, by Grand Slam) until September of his 3-year-old season, the Ramsey colorbearer may prove well worth the wait if his debut run was any indication.

The long-striding dark bay reported home second best behind the highly regarded 'TDN Rising Star' Copper Town (Speightstown) going a one-turn mile in his unveiling by trainer Chad Brown at Belmont Sept. 10 (video). Sixth of seven in the early going, he leveled off nicely in the stretch to cut the deficit to 3 3/4 lengths, good for a solid Beyer Speed Figure of 85.

“Chad thought this was going to be a Derby horse,” owner Ken Ramsey said. “He made that one start and ran second closing like a house on fire down the lane. Chad called back and said, 'Next time out, this horse is a winner.'”

A shin problem, an infection, and a fever were among a handful of ailments that caused Backyard Heaven's delay in making the races. Ramsey came up with the name while watching horses train from, well, his own backyard, this summer at the Spa.

“I bought a house from Jack Knowlton who used to own Funny Cide that backs up the Oklahoma Training Track,” Ramsey said.

“Sitting back there on my sun deck looking at the horses train, I called it backyard heaven. That's how he got his name.”

Produced by a half-sister to graded winners Astrology (A.P. Indy) and Lunarpal (Successful Appeal), Backyard Heaven has posted six workouts since mid-October, headed by a four-furlong bullet in :47.34 (1/26) at Belmont Park Nov. 17. The dark bay, a $160,000 KEESEP graduate, could turn up in a spot at Aqueduct in the near future before heading down to South Florida for the winter.

“Chad is still high on the horse and has been working him with some good horses,” Ramsey said. “We still have high hopes– maybe he'll have a good 4-year-old year.”