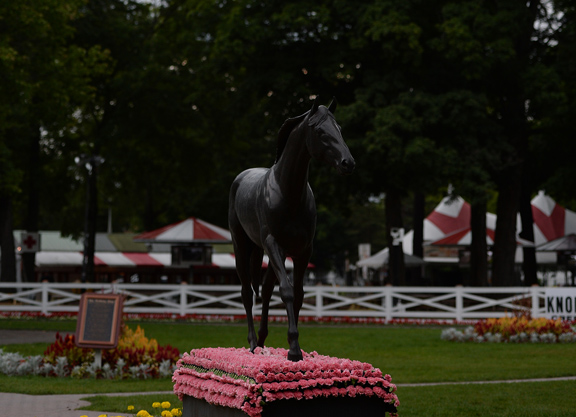 The Sea Hero statue in the Saratoga paddock | Susie Raisher

Sea Hero (Polish Navy–Glowing Tribute, by Graustark), winner of the 1993 GI Kentucky Derby and GI Travers S., passed away earlier this week in Turkey. At 29 years of age, he was the oldest living Kentucky Derby winner until his death.

Bred in Virginia by the legendary Paul Mellon, Sea Hero was a half-brother to MGISW Hero’s Honor (Northern Dancer) and MGSW Glowing Honor (Seattle Slew). His dam was named broodmare of the year in 2003. Trained by MacK Miller, Sea Hero broke his maiden at fourth asking on the grass, but won the 1992 GI Champagne S. before closing the year with a seventh behind Gilded Time in the GI Breeders’ Cup Juvenile. Defeated in his first three outings as a sophomore, Sea Hero upset favored Prairie Bayou in the Run for the Roses (video), but failed to factor in the GI Preakness S. and GI Belmont S., finishing fifth and seventh, respectively. Unplaced in the GII Jim Dandy S., he bounced back to take the Midsummer Derby by two lengths. A life-size bronze in the Saratoga paddock commemorates his accomplishments.

Originally retired to Lane’s End, Sea Hero was responsible for 13 U.S. black-type winners, including one Grade I winner, the 2000 GI Del Mar Debutante victress Cindy’s Hero. Other graded winners by Sea Hero were Hero’s Tribute, Desert Hero and Hero’s Pleasure. Nine months after Mellon’s passing, Sea Hero was sold for $700,000 at the 1999 Keeneland November Sale and continued his stud career in Turkey. A top-10 stallion for many years, Sea Hero was pensioned from stud duties in 2015.