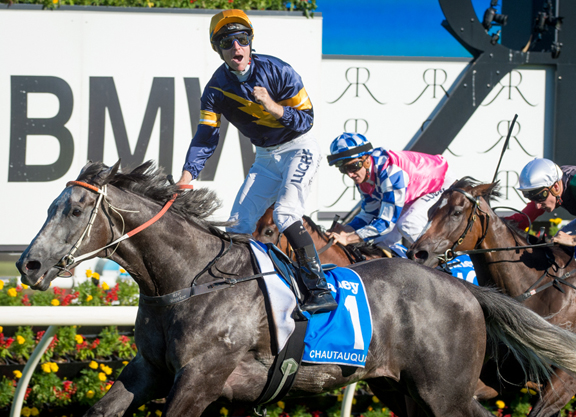 With the benefit of hindsight, it now seems ironic that the two best Australasian gallopers to have raced in Europe during the final quarter of the 20th century were stayers.

Balmerino (NZ) (Trictrac {Fr}) came to England in 1977 to join John Dunlop's stable, having already amassed a rich haul of victories for Brian Smith in the antipodes including the NZ 2000 Guineas over 1600 metres, NZ Derby over 2400 metres and Brisbane Cup over 3200 metres. His first-up victory in England in the Valdoe S. at Goodwood was good, and his next run was even better, second to Alleged (Hoist The Flag) in the G1 Prix de l'Arc de Triomphe. He subsequently finished second to Crow (Fr) (Exbury {Fr}) in the Coronation Cup at Epsom and to Gunner B (GB) (Royal Gunner) in the Eclipse S. at Sandown. In 1984, the remarkable Strawberry Road (Aus) (Whisky Road) arrived in Europe. His wins in his homeland in 1983 the previous year had included top level victories in the Rosehill Guineas, AJC Derby, Queensland Derby and Cox Plate. In Europe he won both the 1984 G1 Grosser Preis von Baden and the 1985 G1 Grand Prix de Saint-Cloud, while his best performance in the USA was his close second to Pebbles (GB) (Sharpen Up) in the 1985 GI Breeders' Cup Turf.

Nowadays, however, it is hard to remember that merely a generation ago the Australasian Thoroughbred, if he had any international reputation at all, was generally regarded as a super-tough mile-and-a-half performer. By contrast, he is now recognised the world over for one principal asset; speed.

A sea-change in the way that the world sees horses from the antipodes came in the third week of June in 2003 when the Paul Perry-trained Choisir (Aus) (Danehill Dancer {Ire}) showed up at Royal Ascot. The fact that four months earlier the imposing chestnut had won Australia's principal 1000-metre weight-for-age race, the G1 Lightning S. at Flemington, cut little ice with punters, who sent the giant colt off a 25/1 shot for the G2 King's Stand S. on the opening day of the royal meeting. The lesson of the hammering which he gave to his 19 rivals was that Australian sprinting form should not be underestimated, a lesson which was reinforced four days later when he followed up with a 13/2 success in the G1 Golden Jubilee S. Only the excellence of Oasis Dream (GB) (Green Desert) was able to prevent Choisir from completing a remarkable treble in the following month's G1 July Cup at Newmarket.

The brightest of all the stars, though, was the peerless Black Caviar (Aus) (Bel Esprit {Aus}) whose 25-race career saw her win 25 races, the 22nd of which was the G1 Diamond Jubilee S. at Royal Ascot in 2012. The change that had taken place in merely nine years was astounding; whereas Choisir had gone off at 25/1 when he had recorded his first Royal Ascot victory, Black Caviar scored that day as the 1/6 favourite.

After Sunday's G1 Chairman's Sprint Prize in Hong Kong, the chances had looked good for another Aus-bred to add his name to the Daimond Jubilee S. roll of honour. The Australian form of Chautauqua (Aus) (Encosta De Lago {Aus}) was good enough to see him sent off hot favourite at Sha Tin, his four Group 1 victories in his homeland having included this season's Lightning S. and last month's Darley T J Smith S. at Randwick, in which he had recorded a jaw-dropping last-to-first triumph which, even by his usual exhilarating standards, had left the crowd stunned.

Chautauqua was, if possible, even more impressive at Sha Tin than he had been at Randwick. However, his training team of Michael, Wayne and John Hawkes has now decided to take Chautauqua back home to Australia instead of attempting to snare the $1 million Global Sprint Challenge bonus at Royal Ascot.

It is, of course, only telling half the story merely to observe that the Australasian Thoroughbred and the general perception thereof have changed utterly since the days of Balmerino and Strawberry Road. This change has not just happened, but can be attributed largely to one significant factor; the introduction of the practice of shuttling stallions in general and the massively influential Danehill (Danzig) in particular. Coolmore has been the key player in this practice, and the long reign of Danehill as king of the shuttlers began when he arrived in New South Wales in advance of the 1990 breeding season as a result of a project instigated jointly by John Magnier of Coolmore and John Messara of Arrowfield. The full extent of Danehill's legacy cannot be over-emphasised.

It is not, of course, the case that all of Australia's international stars have come from the Danehill sire-line. Choisir, though, hails from the line, as does his son Starspangledbanner. Chautauqua, like Black Caviar, stems from a different top-class one-time Coolmore shuttler; the former descends from Fairy King (Northern Dancer) while Black Caviar descends from Royal Academy (Nijinsky). However, the seemingly ubiquitous Danehill is rarely far away. Chautauqua's dam Lovely Jubly, winner of the Magic Millions as a 2-year-old in January 2002 before taking both of Queensland's Group 1 juvenile races later that season, is a daughter of Danehill's very fast son Lion Hunter (Aus). That excellent but ill-fated grey stallion was a great advertisement for Coolmore's shuttling programme, his dam Pure Of Heart (Ire), a Group 1 winner in Melbourne, being a daughter of one of the shuttling pioneers, Godswalk (Dancer's Image).