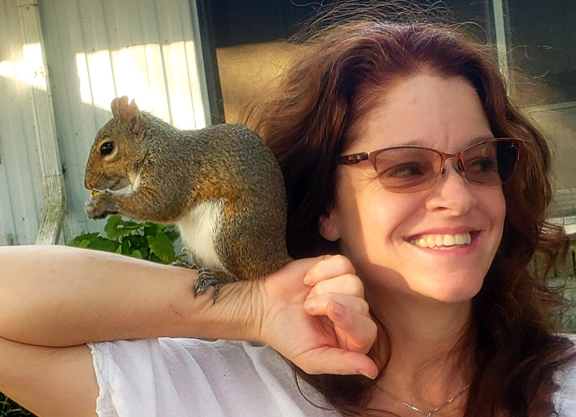 Darcy Scudero has a way with animals. She also has pedigree that may explain her success in choosing and retraining Thoroughbreds as well as her understanding of the complexities of working with equine athletes. Scudero’s mother Gail owned Full Deck Farm in Fairfax, VA and sold off-track Thoroughbreds to the likes of George Morris and Joe Fargis, who rode the Thoroughbred mare Touch of Class to double-gold at the ’84 Olympics. Meanwhile, Scudero’s father Joe was a running back for the Washington Redskins.

Scudero became an exercise rider at age 19, successfully rode races in the early 1990s, and continues to break young horses for a handful of clients from her Ocala base. Throughout her life and career, Scudero has bought and rescued racehorses to retrain for riding and show careers. And, like her mother, she can spot the ones that have potential to compete among the best.

In 2016, Scudero received a Lemon Drop Kid mare named Charming Emily from trainer Joan Scott because she wasn’t making it as a racehorse. Scudero contacted BC native Holly Jacks-Smither, a successful international eventer, married to trainer Bruce Smither. Jacks-Smither has had a meteoric career including being short-listed for the 2016 Olympic games. Jacks-Smither rides as many off-track Thoroughbreds as she can.

“Sure enough, I fell in love with her,” said Jacks-Smither. “We call her Big Pretty and she is competing at the Preliminary level now. I’m thrilled that Darcy always has a look out for me.”

Scudero steps up for owners, trainers and non-profits in Florida whenever she is called upon. Its not always the sound, scopey horses for which she extends herself. For example, late last year, Scudero got a call from trainer John Tammaro’s assistant at Tampa Bay Downs about a horse named Return Video (Sweet Return {GB}) who suffered from navicular. His racing career was over. And, because he was so uncomfortable, his prognosis in general was not good.

“Everyone in the barn at Tampa was rooting for this horse,” said Scudero. “I am so happy for him. Horses like him keep you doing this kind of thing.”

Wall Street Bull (Benny the Bull) came to Scudero as a 3-year-old. It was evident that he moved well enough for dressage. Scudero posted his picture in full stride with the comment: ‘No spook.’ This attracted dressage rider Colette Zimmer.

“I didn’t want a 3-year-old and I was looking for a horse that I could ultimately sell to an amateur rider,” said Zimmer. “But Darcy’s comment and his picture were encouraging so I went to see him. I knew he was the right horse when Darcy hopped on him in a halter and no saddle and rode him around the farm for me.”

At the 2016 Thoroughbred Makeover, Bull finished eighth in the Free Style class. When Zimmer was in the market for her 2018 ‘makeover horse’ and having no luck, it was Scudero who again came up with the match.

“The market gets crazy when people start shopping for their ‘makeover horse'”, said Simmons. “I kept striking out because I like to vet a horse before I buy it. But, if you wait, you lose the horse.”

“Then I gave Darcy a call and told her I was looking. Before long, she sent me pictures of Loki’s Revenge (Our Celebration). She got it right again. Although I bought him for the 2018 Thoroughbred Makeover, he ended up needing treatment and time for an unforeseen stifle issue. So, we entered him this year instead and I am so excited because he is going great.”

Scudero has the reputation of being true to her word, knowing her horses and also being diligent in matching every horse to the right person.

Four years ago, Lisa Smiley, new to Florida, was looking for her first horse and found herself discouraged by the process. Then she answered an ad placed by Scudero about a horse named Trip Six (Devil His Due). When Scudero realized that Smiley lacked experience, she agreed to sell her the horse but wouldn’t let the horse leave with Smiley until she felt comfortable about how Smiley and Trip worked together. Smiley asked to become Scudero’s working student and years later founded a horse rescue, Forget Me Not Equine Rescue, Inc., to follow what she learned while working with Scudero.

“I never met someone more honest and dedicated to finding the best possible home for every horse, ” said Smiley. “I saw Darcy turn down offers to buy a horse when she felt it wasn’t the right match. Not many trainers do that. She is the only person I know who starts off telling everything negative about a horse before she says any of the good things.”

Elika Otoya, an attorney who moved to central Florida from Hawaii to pursue her dream of having a small horse farm is indebted to Scudero for finding her two Thoroughbreds, Green Swamp (Wekiva Springs), aka Goblin and “Topper”, a 20-year-old off-track Thoroughbred who had a long second career as a dependable riding horse but was found neglected and in need of rescue. Scudero took him in and as he started to get healthy, she knew she had found a diamond in the rough. She called Otoya.

“We took Topper and continued his rehabilitation, and now my daughter rides him everywhere,” said Otoya. “He was so perfect for us because I needed an experienced horse who could help me get my confidence back. Darcy is 100% committed to getting the horses into the right place and helping in every way. Next week she is coming over to help me take Green Swamp out on the trails. She is always there for the horses and us.”

One gelding has a home for life with Scudero. Now 10 years old, she had purchased this son of Scat Daddy as a yearling for a client who named the horse Scudero. She got him to the races as a 2-year-old, but within a year, he was too tough for the riders and handlers at the track. The trainer called her for help. Rather than bring him back to the farm, Scudero went to the track every day and restarted him there. He raced for another two years and once again became difficult to handle. This time, she took him home for good. Now she is jumping courses on him with no bridle.

Scudero exemplifies the caring and character of many people in the sport/business which is often lost in the reporting of racing, sales and horse welfare concerns. Her big heart and gift for seeing what a horse needs and connecting with all animals makes her story remarkable.

“Each one is an individual and special in its own way,” said Scudero. “I’ve been so lucky to be around these horses for my whole life, I try to do the best for every horse in my care. It’s a huge thrill when you find the discipline that clicks with a horse and see them soar. That’s the best feeling.”

When I sat down with her outside her house in Ocala, a squirrel dropped out the tree onto her shoulder.

Joe Fargis stayed friends with Scudero’s mother until her death and is still in contact with Scudero.

“Darcy knows her horses,” said Fargis. “She has a wonderful way with all animals. I’m proud to call her a friend.”

To follow Loki’s Revenge’s journey to The Thoroughbred Makeover, go to https://www.facebook.com/lokisrevenge2018rrp/.