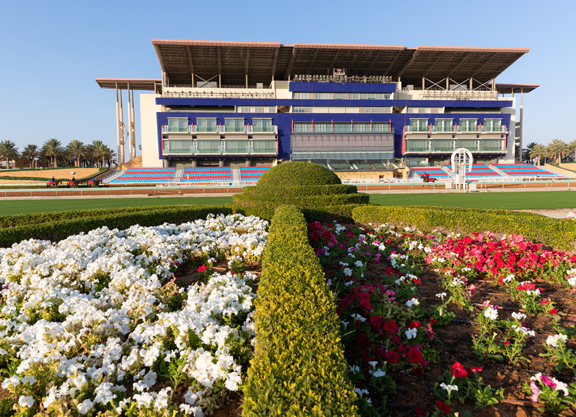 “We're putting on the Saudi Cup in the hope that people who love horses and racing around the world might come and take a closer look at our culture and our country,” Prince Bandar said while inviting fans to Saudi Arabia.

The Saudi Cup card comes 24 years after Sheikh Mohammed permanently altered the international racing calendar with the introduction of the G1 Dubai World Cup. Bill Mott won that inaugural race back in 1996 with the great Cigar. Mott returns for another try at the world's richest race when he saddles Tacitus (Tapit) Saturday.

“You've got first-class facilities here like the quarantine center and the way it's set up and managed,” Mott said of the Riyadh racetrack. “To have this race go off for the first time, they've done a terrific job getting everything prepared on such short notice.”

Mott continued, “I'd like to be able to put [the Saudi Cup] on my resume. If that were to happen, you'd have some bragging rights. It's something you can talk about–it's a good conversation starter. At the time, the Dubai World Cup was the richest race in the world and now this one is.”

Trainer Bob Baffert, a three-time winner of the Dubai World Cup, will saddle a pair of runners in Saturday's marquee event.

Baffert said the Saudi Cup has the potential to change the economics of racing and encourage more owners to keep their horses in training.

“We've seen all the good 3-year-olds go off to stud because they can't make that kind of money,” Baffert said. “But a horse like McKinzie (Street Sense), if they didn't have this race, he'd probably be at a farm right now. It gives a guy a chance. You spend a lot of money breeding horses and it gives them a way out. So when I go to buy a horse for somebody, I can say, 'Look what we can do.' Before it was all about the Kentucky Derby. Now there is life after the Kentucky Derby. You have the Breeders' Cup, Dubai World Cup, now you've got this Cup. You never know what's next.”

Another horse whose career was extended to make room for the Saudi Cup is Midnight Bisou (Midnight Lute). Connections had entered the dark bay mare in last year's Fasig-Tipton November sale, but decided to scratch her from that auction the  day before her runner-up effort in the GI Breeders' Cup Distaff.

“We were supposed to be selling Midnight Bisou at the November sale,” said co-owner Jeff Bloom. “We decided the day before the Breeders' Cup that we were going to go ahead and race her another year. And what went into the equation in terms of making that decision was a $20-million race on the horizon. When it was introduced to us in the States, I think we were all in the same boat–who do I have in my portfolio who might be suitable for this. We always felt Midnight Bisou would be up to the challenge of facing the boys, and when we decided to go ahead and keep her in training, it was a no-brainer. There's a $20-million ticket out there. Let's go ahead and take that chance.”

The Saudi Cup will be televised in the U.S. live on FOX Sports 1 at Noon ET (DIRECTV ch. 219, Dish ch.150) with the undercard airing on TVG. In the UK, it will be shown on Sky Sports Racing and Racing TV.