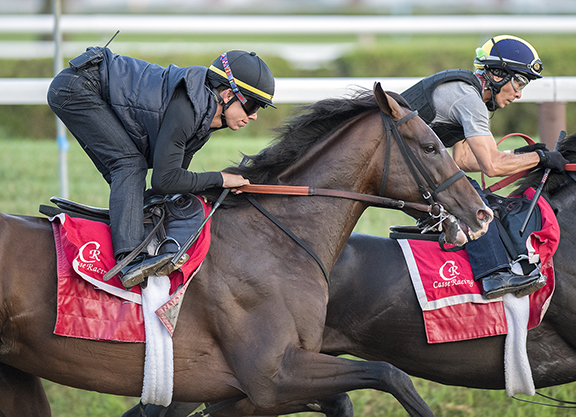 War of Will | Sarah Andrew

• Classic winner War of Will (War Front), a disappointing ninth in the GI Belmont S., breezed in company with GI Woody Stephens S. fourth Strike Silver (Violence) at Saratoga Saturday. With Tyler Gaffalione in the irons, War of Will, breezing outside of Strike Silver, overtook his stablemate down the lane and galloped out strong. He covered five furlongs in 1:00.43 while Strike Silver stopped the clock in 1:00.64. The GI Preakness S. hero is targeting this summer's GII Jim Dandy S. July 27 and GI Runhappy Travers S. Aug. 24. Strike Silver is being pointed to the GII Amsterdam S. July 28.

“He always amazes me how effortlessly he does things,” trainer Mark Casse said of War of Will. “I wanted to put a little air into him. He looks great. He's put on about 100 pounds and his color is really good. He doesn't look like a horse that has been through the wars of the Triple Crown.”

• Tax (Arch), winner of this term's GIII Withers S. and a close fourth in the GI Belmont S., breezed a half-mile on the Oklahoma training track in :49.95 seconds Saturday in preparation for a start in the GII Jim Dandy S. “He's moving great. He's doing better than he's ever done right now,” trainer Danny Gargan said. “I wanted him to go in :50 and he went :49 4/5. He worked fast last week and I just wanted to have an easy breeze this week and then we'll bring him back next week and tighten him up. I'm really happy with how he's doing. He looks better now than he's ever looked. His coat is coming around. Everything about him is good right now.”

• Tacitus (Tapit), winner of the GII Wood Memorial S. and runner-up in the GI Belmont S., and last term's GI Woodward S. winner Yoshida (Jpn) (Heart's Cry {Jpn}), breezed five furlongs in tandem over the Oklahoma training track Saturday. Tacitus, targeting a start in the GII Jim Dandy S., completed the five-furlong breeze in 1:01 flat. Yoshida, being aimed at the GI Whitney Aug. 3, worked in 1:00.90. “Real good work,” Hall of Fame trainer Bill Mott said. “I thought they both went well. We just want to keep them happy, healthy and stay on their respective courses. [Tacitus is] pretty much about the same as we had him for the Belmont. He was going good into that race and he's continued to do so.”

• 'TDN Rising Star' Global Campaign (Curlin), a sharp winner over subsequent GI Belmont S. hero Sir Winston (Awesome Again) in the GIII Peter Pan S. last time May 11, breezed five furlongs in 1:01.16 Saturday morning over the Saratoga main track. He remains on target for the GII Jim Dandy S. “I thought he worked great and came back good,” trainer Stanley Hough said. “He cooled out good. It was a step in the right direction.”