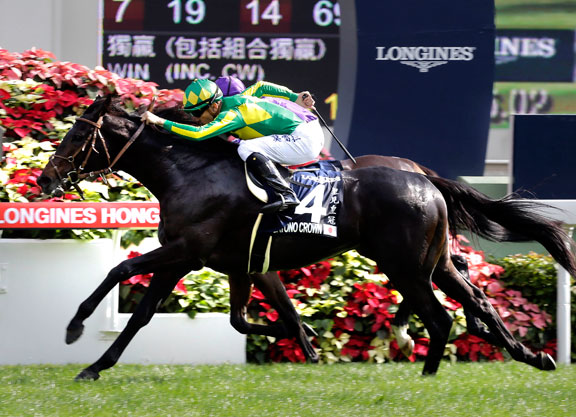 Satono Crown, who wrapped up 2016 with a win in the G1 Longines Hong Kong Vase, kicked off his 5-year-old campaign on a winning note in Kyoto's G2 Kyoto Kinen on Sunday. The bay sat third, one path off the fence, around the first turn and maintained his position as Yamakatsu Raiden (Jpn) (Symboli Kris S) opened a sizeable lead. Garibaldi (Jpn) (Deep Impact {Jpn}) took off after that front runner, leaving Satono Crown to lead the remainder of the field, and he was shaken up by Mirco Demuro on the turn to pursue the front runners. Still with about four lengths to make up at the top of the lane, Satono Crown came charging down the centre of the track to win handily.

Satono Crown, a group-race winner each year since two, also finished third in the 2015 G1 Tokyo Yushun (Japanese Derby). He is the fifth foal, and third stakes horse, out of Jioconda, who was bought privately by Northern Farm while carrying him. He is a full-brother to the G1 Cheveley Park S. winner Lightening Pearl.