Saratoga Regulars Bring the Spa to their Backyard 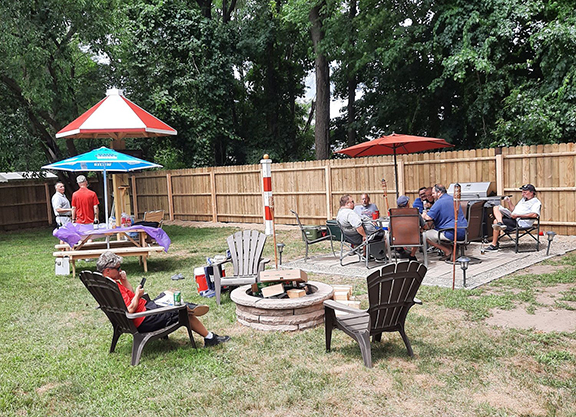 “And they’re off at Saratoga!”

Five words that hundreds, if not thousands, of people live to hear every July as the ceremonial phrase marks the beginning of another historic Saratoga Race Meet.

While most normal attendees were unable hear those Tom Durkin-inspired words in person this year, some did their best to make the most of the situation.

The enthusiasm from Mark Struffolino might be the example racing fans can look to emulate. Born and raised in upstate New York, the Rotterdam resident grew up spending summers at the Spa, and has attended opening day with the same group of friends for nearly 30 years.

Struffolino knew that his friends would be devastated when they couldn’t spend their summer weekends in Saratoga’s famed backyard as they have for decades, so he brought the tradition right to their hometown.

Over the past two months, the Saratoga fanatic has been busy building his own picnic area in his backyard. The project was finished on the eve of opening day, and is now complete with a TV kiosk, a red-and-white striped quarter pole and of course, a picnic table.

“This all started because of the pandemic,” Struffolino said. “My buddies were all down in the dumps, so I knew we had to do something. I took it upon myself to do something special for everyone and not waste an entire summer.”

The project was initially planned as a surprise for his friends, but Struffolino soon realized he would need some extra hands.

“When I got the idea, I put it all on paper and bought the material,” Struffolino said. “I started to build it, but then realized I was going to need more help. So I told my friends, and they all thought I was crazy.”

The most difficult part of the project was the kiosk umbrella. While the Saratoga version is comprised of steel, Struffolino and his team used framing lumber and plywood. Struffolino said the end result was a near-400 pound canopy.

“I had concrete brought in, I had to have a building permit and it was just a whole to-do,” he said with a laugh.

The finishing touch was the quarter pole, which was completed just this week.

“I saw one online and I was like no way, we have to have that,” Struffolino said. “Tuesday we finished putting in new fencing, so we wrapped up right in time for opening day.” 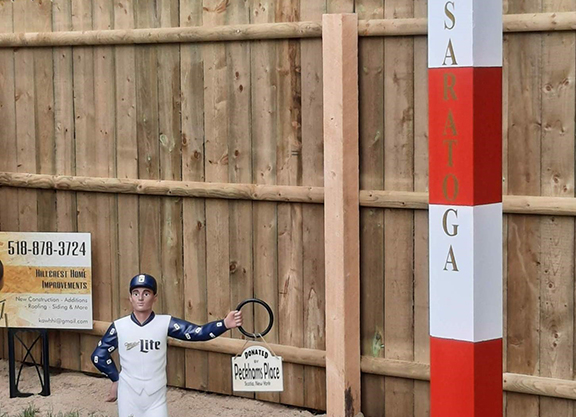 While his friends may have been doubters at first, they soon got in on the fun, even taking off work to ensure that the project was finished before the start of the race meet.

“We all agreed we needed to do more, we needed more,” Struffolino said. “We were so close to the deadline and when it went crazy on social media, we had to get it finished. The news has been here twice and Anthony Stabile wants to do a fundraiser here on a dark day. The guys are so excited.”

The group is not only a band of die-hard fans, they’ve also been involved in various partnerships over the years.

“I was in the first partnership with Parting Glass Racing with Tom Gallo years ago,” Struffolino recalled. “We’ve had a couple of our own horses and they’ve been trained by Carlos Martin.”

No matter if they have a horse running or not, the friends can typically be found at the Spa on any given race day, and are usually up before the crack of dawn to participate in the traditional run for the picnic tables.

“We’re usually at the track at 5:30 in the morning,” Stuffolino said. “And as soon as they open the gates we run in and start with mimosas and breakfast. It’s a big to-do.”

But Struffolino said the early mornings are more than worth it in order to fully experience the magic of Saratoga, a sentiment shared with most Spa-goers.

“You can’t beat the atmosphere,” he said. “It’s so upbeat, everybody is having a good time. I don’t think you’ll see a sad face in that place. It’s magical, everything about it. From opening day to Labor Day. You can go there on a Wednesday and hang out with 15,000 people who are all in a great mood. Where can you do that anywhere else?” 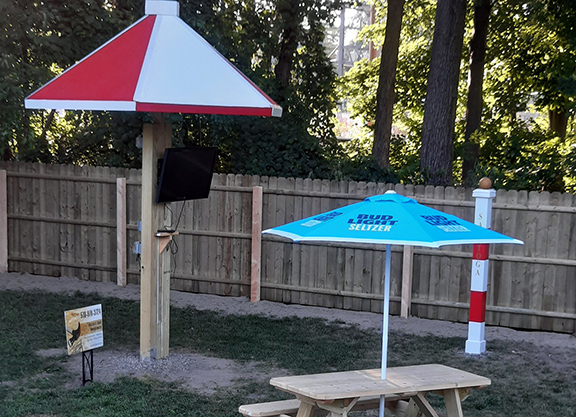 This year the friends were still able to have a great opening day, and certainly one that they will remember for many years to come. Struffolino reported that of course there were still mimosas in the morning, although this year they commenced at eight in the morning instead of six.

“Nobody works on opening day because it’s Christmas Day,” he said. “It’s nothing from the gambling standpoint for us, it’s the people we’ve met. Between ownership and friends of friends, we’ve met a lot of great people. So we’re going to do the same thing we normally do because it’s something to look forward to now. It’s difficult enough with the pandemic. The whole world has changed. So this was a way to gain some normalcy without it being one hundred percent normal.”