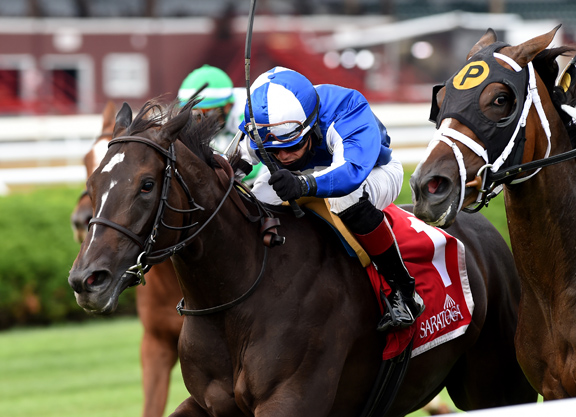 Sophomore fillies take center stage in the GII Sands Point S. at Belmont Saturday and among leading contenders in the eight-furlong event is Waterford Stable's Speaktomeofsummer (Summer Front). Victorious in last fall's Chelsey Flower S. at the Big A, she kicked off 2020 with a fourth-place finish in Belmont's Wonder Again S. in June before realizing a head score in Saratoga's GII Lake Placid S. July 19. Rank in the early going of the Saratoga Oaks Invitational S. at 9 1/2 furlongs Aug. 16, the Christophe Clement trainee finished fourth behind Antoinette (Hard Spun) and cuts back in this return. Joel Rosario, aboard for her three latest starts, gets the call in the Sands Point.

“The filly is doing great. She's working well and looks well. I'm excited to see her run,” said Clement. “I think she's very versatile from a mile to a mile and a quarter. I don't see the distance as a negative, I think she's perfectly OK with it.”

A winner in last season's 8 1/2-furlong GII Miss Grillo S., she closed out the year with a fifth in the GI Breeders' Cup Juvenile Fillies Turf. Filling that same position in her 2020 return in the GIII Wonder Again S. in June, the Maryland-bred was given some time off before resuming with a nose score in Saratoga's

GIII Lake George S. Aug. 28. Jose Ortiz, winning at 25% at the Belmont meet, accompanies the filly for the first time.

Brown is also represented by Tamahere (Fr) (Wootton Bassett {GB}), making her U.S. debut following a listed score at La Teste De Buch in France in June. The French-bred will be ridden by Irad Ortiz Jr.