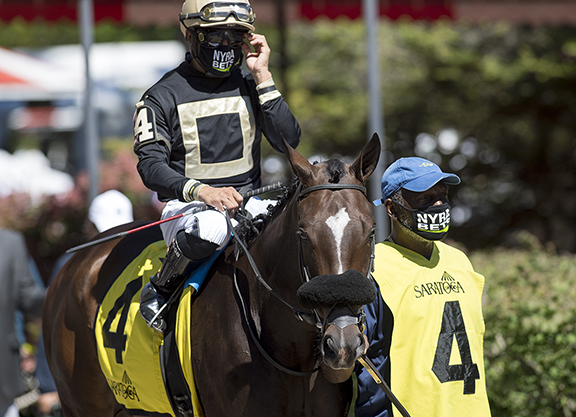 Samborella was sailing to an authoritative victory in the Seeking the Ante S. at Saratoga Friday, but took a few bad steps just before crossing the wire first. The bay filly had her left front ankle put in a cast and was taken off the track in a horse ambulance. Anna Seitz of co-owner It’s All About the Girls Stable tweeted later in the afternoon that the filly had been put down.

Sent off at 5-2, Samborella broke alertly and went right to the early lead, zipping through a quarter in :21.65 and a half in :44.40. She opened up by seven lengths without being asked and was 2 1/4 lengths in front under the wire. Favored Make Mischief was closing for second.

Samborella was third in her debut versus state-bred foes going 5 1/2 furlongs at Saratoga July 24. She is the seventh winner for her freshman sire Outwork (Uncle Mo) and his first stakes winner. Outwork follows Laoban and Nyquist as first-crop sons of Uncle Mo represented by stakes winners.

The unraced Light and Variable is a half to 2016 GII Adirondack S. winner Nonna Mela (Arch) and 2018 GIII Schuylerville S. runner-up Nonna Madeline (Candy Ride {Arg}). The mare produced a colt by Exaggerator in 2019 and a colt by Candy Ride (Arg) this year. She was bred back to Uncle Mo. Samborella’s third dam is She’s a Winner, dam of Grade I winner Bluegrass Cat (Storm Cat). Click for the Equibase.com chart or VIDEO, sponsored by Fasig-Tipton.