Rust Hails ‘Start Of The Beginning’ 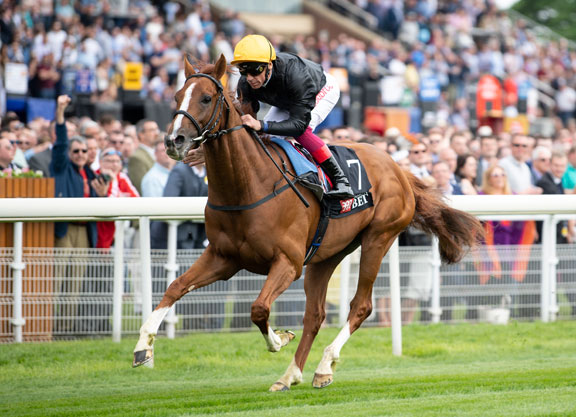 Champion stayer Stradivarius is entered for the first Group 1 of the British season, the Coronation Cup at Newmarket | Racing Post

The date of June 1 has for several weeks been dangling tantalisingly over British racing as the earliest possible day of resumption for a sport which has been under wraps since Mar. 18, five days before country went into full lockdown.

With restrictions having been eased in recent weeks, hopes continued to grow that racing could be one of the first professional sports to burst back into action from the coronavirus-enforced hiatus, but it took until 4pm on Saturday, May 30 for the government to grant its consent publicly.

There have been sighs of relief across the industry which will have to deal with a loss of revenue of around £55 million between mid-March and the end of June. On Sunday morning the British Horseracing Authority (BHA) outlined the extra steps which have been taken over the last week to ensure that Newcastle’s 10-race card on Monday will be able to take place amid strict social distancing and safety measures.

“Our focus is on returning safely and protecting the health of all of those taking part in behind-closed-doors racing whilst reassuring the communities which racing takes part in that the risk of transmitting the virus have been minimised,” said the BHA’s chief executive Nick Rust via a Zoom-hosted press conference.

“The leadership of the sport has worked together very closely on this. Given our structure, it’s very important that happened and it has happened here. There have been some major and very difficult decisions to make along the way but we’ve stuck closely together, which I think is excellent news for the resumption.”

He continued, “This is only the start of the beginning. We will need to work very hard as a sport to battle our way through the next six to 12 months as our revenue streams are reduced compared to the model that we were operating before the coronavirus.

“I think the leadership of our sport has been more united than I’ve seen it to achieve this. Obviously there have been a lot of tensions and people are under a lot of pressure across the sport but we’ve stood with the unity of purpose and we are very proud that we are the first major professional sport that is back on the first possible day that we could have been back, in line with the government’s guidelines.”

Those guidelines include the fact that, for the time being, no owners or general public will be allowed to attend race meetings. But, with other sports yet to resume, Rust said he hopes that racing will be able to take advantage of a greater number of people potentially watching the sport on television.

He added, “We have a lot of opportunities as a sport over the next few weeks to showcase what we’re all about. Not only how we manage protocols but just how colourful, how exciting our sport is. We’re going to have coverage that we haven’t seen for probably 40 or 50 years relative to other sports. That is a great opportunity to reconnect with the public. I think racing in Britain has done well over recent years despite changing attitudes among the public, and we’ve got a chance over these next few weeks to really showcase our sport and our industry and help us to really push forward to the recovery that our industry needs.”

Rust continued, “I think the public will see a very professional group of people operating on race days and following the social distancing guidelines, doing all they can to minimise the risks of transmitting the COVID-19 virus. We’ve tried out our procedures that we will be using tomorrow. We had a test day at Lingfield on Wednesday, with a limited number of BHA and racecourse officials and one or two horsemen, and then we had a full test run with a series of mock races, essentially going through the whole of the procedure of the race day at Lingfield on Friday. Although our plan was in pretty good shape I think that has really helped us to tune it up and identify the areas that we really need to focus on as we start back again.”

While bars, shops and restaurants in Britain remain closed, from Monday schools will be reopening and a number of people will be returning to workplaces. Rust expressed his satisfaction that racing’s workers will be well protected as they are allowed to return to racecourses.

He said, “The layers of protection that we have put in place, starting with a rigorous screening process for all attending, means that this will be one of the most controlled environments in which people are returning to work on Monday. A lot of other people are returning to work on Monday in other industries, and then there will be more on 15 June as other retail opens up, and so on.”

Despite racing’s return, racecourses will still be facing financial uncertainty without the extra revenue gleaned from hospitality, and from a likely shortfall in sponsorship.

David Armstrong, CEO of the Racecourse Association, outlined the pressures faced by tracks which have had no income since mid-March. He said, “It has been a tough time for racecourses. We’ve been losing approximately £8.2 million a month, so a return to racing was important for us, but in practice what is really important are the weeks and months ahead as we work towards the full resumption of our sport. We don’t know when that’s going to be, and we don’t know when crowds will be allowed back, but we will be working as hard as we can to prepare for that at the right time.”

He added, “We’re obviously going to go through a phase of continuing hardship for the sport while we build back towards a normal fixture list and a normal set of income streams. So for now it’s a very important first step to get back racing but it doesn’t really yet begin to alleviate the financial pressure.”

British racing resumes with one meeting on the all-weather at Newcastle on Monday and two meetings per day thereafter in the short term. The first turf fixture will be at Yarmouth on Wednesday, while Newmarket hosts the first Pattern contests of the turf season during the four-day QIPCO Guineas meeting, which starts on Thursday. The transferred G1 Hurworth Bloodstock Coronation Cup will be run on Friday followed by the first two British Classics of the year on Saturday and Sunday. Newmarket will be racing on the Rowley Mile with the action set to switch to the July Course for July and August.