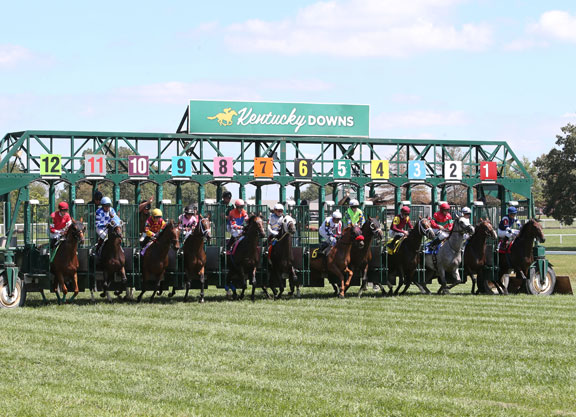 Even with a modest reduction in prize money owing to the COVID-19 pandemic and a two-month absence of revenue from historical racing machines, a record total of $12,337,000 was paid out over the course of the meet, bettering last year's $11,520,380.

A perennial leader among U.S. tracks in number of starters per race, Kentucky Downs averaged 9.98 for the just-concluded season, a decline from last year's astonishing 11.26. The 16 black-type races staged at the meet drew an average of 10.25 runners, including 11.17 for the six sprint stakes. Nine first-level allowance races averaged 11.18 horses, while non-claiming maiden races averaged 10.33 runners.

The meet did not come off completely glitch-free. The fifth race on the opening day of the meet Sept. 7 was declared a no-contest when a gate malfunction saw the gates open with two horses left to load and several others unprepared for the start. On Wednesday's closing card, officials initially posted the incorrect order of finish for race three, but corrected the mistake prior to the race being declared official. And the track made use of Equibase's Gmax timing and tracking systems, resulting in times that were uniformly faster from past meets. The track attributed this to “different and more standard starting positions based on GPS measurements,” resulting in race times that varied “significantly.”

“We can't thank the horsemen and the horseplayers enough for their support this meet,” said Ted Nicholson, Kentucky Downs' senior vice president and general manager. “The numbers speak for themselves. We appreciate the Kentucky Horse Racing Commission giving us an additional day this year, and the horsemen took full advantage of it. We had some mishaps and glitches, and each will be scrutinized whether they resulted from human error or were beyond our control. Through it all, our racing was spectacular, which is a credit to our owners, trainers and jockeys and to which bettors across the country enthusiastically responded.

He continued, “As far as times and course records, we are going to study the data before making a final determination. But in all likelihood, 2020 will become the baseline year going forward as far as course records. With any new technology, there is a learning curve and hiccups. But we believe the new system is a big step toward addressing the challenges of timing such a unique course as Kentucky Downs.”

Tyler Gaffalione was the meet's leading rider with 11 victories, while Mike Maker won a record fifth title with eight winners. His client Three Diamonds Farm was represented by four winners.