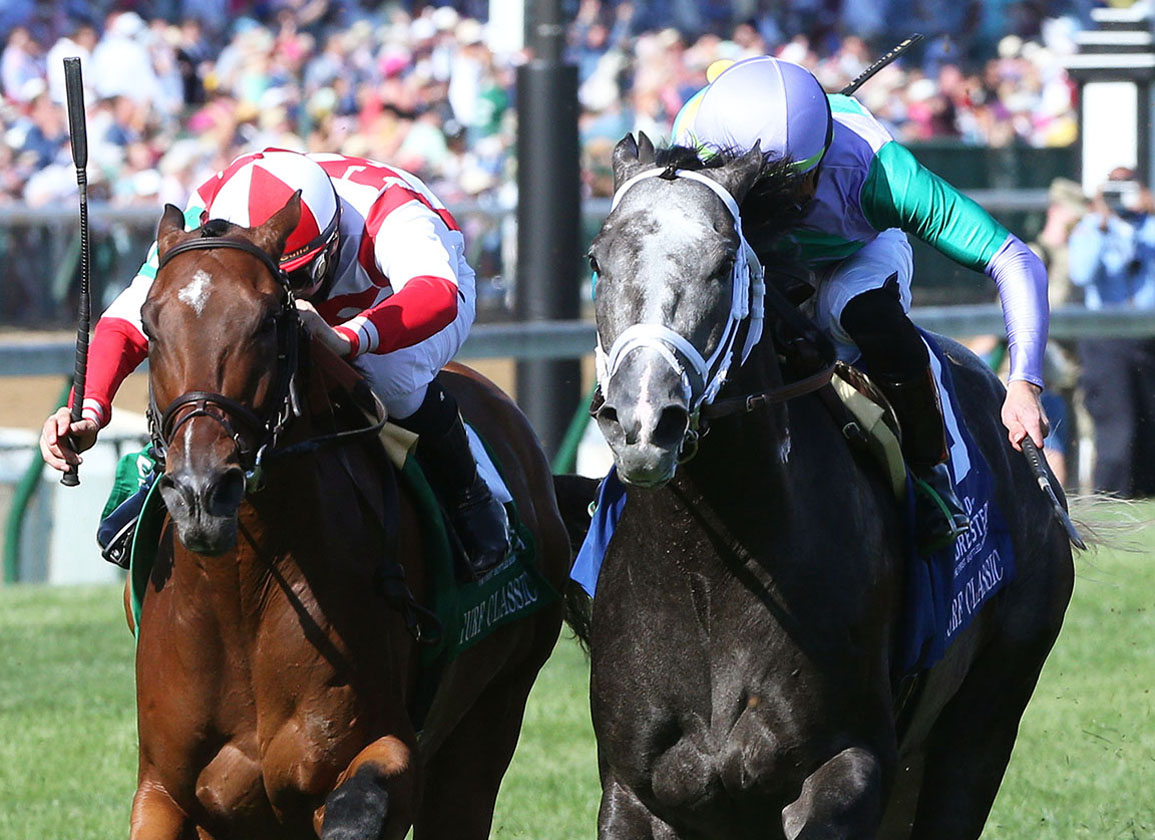 At the conclusion of the May 1 GI Old Forestor Bourbon Turf Classic at Churchill Downs there was no room to spare between Robert and Lawana Low's Colonel Liam (Liam's Map) and Klaravich Stables' Domestic Spending (Kingman {GB}) who crossed the wire in unison and the duo will attempt to separate themselves in Saturday's GI Resorts World Casino Manhattan S. at Belmont. Domestic Spending is trained by Chad Brown, who has won the 1 1/2-mile race on seven occasions, including the last two most recent renewals.

On the board in all five starts at three, including a win on the Saratoga Derby Invitational, Domestic Spending rounded out the year with a score in the GI Hollywood Derby at Del Mar in November. Given some time off, he returned to dead heat with Colonel Liam last time.

“He seems to be doing really well and came out of his last race super,” Brown said of the colt, who will break from post 4 with Flavien Prat back in the irons. “He's been breezing like a timepiece, so I think we're in good shape. He ran a faster race than the horse he dead-heated with in the Turf Classic. We're confident he'll run a good race.”

Trying to take down Team Brown, Colonel Liam, who finished fourth behind Domestic Spending in last summer's Saratoga Derby, kicked off his winning skein in December with a confident victory in Gulfstream's Tropical Park Derby before eking out a win in the 9 1/2-furlong GI Pegasus World Cup Turf Invitational at that venue in January. Prior to his Turf Classic tie, he proved best in the GII Muniz Memorial Classic S. Fair Grounds in March.

“It's a very deep race and a very good race, arguably the strongest on the card,” said trainer Todd Pletcher of the Manhattan. “Colonel Liam is doing great and he's run well every time; we expect him to do the same again.”

He added, “I think he thought he had [the Turf Classic] won last time and he may have idled a touch when he got to the lead. Depending on the pace scenario, I don't see too much pace. He may find himself closer and possibly on the lead. We'll play it by ear and let him do his thing.”

Ridden by Irad Ortiz, Jr., the grey will break from Post 10.

Calumet Farm's Channel Cat (English Channel) comes into this off a career-high score in Belmont's GI Man O' War S. May 8. The 6-year-old was able to withstand the oncoming 2020 GI Belmont Derby winner Gufo (Declaration of War) by a nose at the wire.

“I'm only just getting to know the horse, but he seems to really be coming around in the short time I've had him,” said Jack Sisterson, who took over Channel Cat's training in late 2020. “He was second in the [GII] Elkhorn [S. at Keeneland Apr. 17] and we wanted to give him time to come back for the Manhattan, but he put on 50 pounds after the Elkhorn and his coat was coming around. If horses could talk, he was telling us he wanted to run again. So, we ran him back quick.”