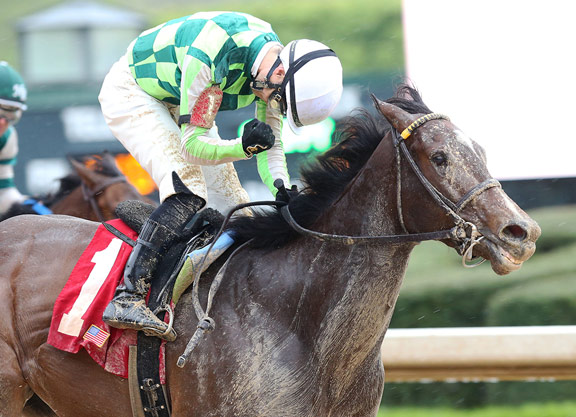 Ten Broeck Farm’s Kimari (Munnings) may be in line for a return date at the Royal Ascot meeting this summer following her win in the Purple Martin S. at Oaklawn Saturday. Trainer Wesley Ward said the tentative plan for Kimari, who was second in last year’s G2 Queen Mary S., is to return to England for the June 19 G1 Commonwealth Cup.

“She’s going to be just a pure sprinter, dirt or turf,” Ward said after his first career Oaklawn victory Saturday. “We’ll probably try to stick a little bit to the grass to keep her sound because the ultimate goal would be the GI Breeders’ Cup Sprint. I’ve told them all along that I feel so strongly about this filly. Plus, Keeneland [site of the 2020 Breeders’ Cup] is my home base and hers as well, so we would like to go against the boys. It’s a six-furlong [dirt] race. I think she’s really going to jump up as we get through the season, and numbers-wise she’ll be right up there as a serious contender for the Breeders’ Cup Sprint against the boys.”

Kimari was tabbed a ‘TDN Rising Star’ following her 15-length debut win over the main track at Keeneland last April. She was a narrowly beaten runner-up in the Queen Mary in her second start and returned stateside to win the Bolton Landing S. at Saratoga and the Indian Summer S. at Keeneland. She concluded her juvenile campaign with a fourth-place effort in the GII Breeders’ Cup Juvenile Turf Sprint S. In her first start back on the dirt since her debut, Kimari closed stoutly to earn a 1 3/4-length victory in the six-furlong Purple Martin (video).