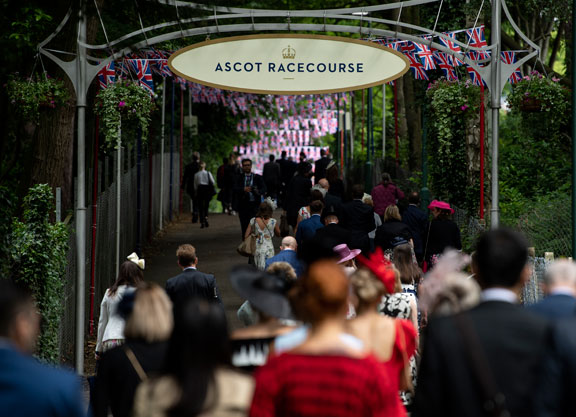 The movement of the G1 St James’s Palace S. and G1 Coronation S.-and the majority of the 2-year-old races–to the back end of the Royal Ascot programme are among the changes made to the meeting, which is set for its original dates of June 16 to 20 and will be staged without spectators. Six extra races have been added to the five-day stand for this year only, with seven races set for the first four days and eight on the final card.

In order to maximize the time between the Guineas’ on June 6 and 7, the St James’s Palace and Coronation S. will take place on the Saturday of the Royal meeting.

Four of the meeting’s six 2-year-old races will be staged on the Friday and Saturday: on the Friday will be the G3 Albany S. and G2 Norfolk S., while Saturday will see the running of the G2 Queen Mary S. and G2 Coventry S. The Listed Windsor Castle S. will be run on the Wednesday and the Listed Chesham S. on the Thursday.

The G2 King Edward VII S. and the G2 Ribblesdale S. have been moved to opening day to serve as preps for the G1 Investec Derby and G1 Investec Oaks on July 4. The G3 Hampton Court S., also a Derby prep this year, will be run on day two.

The Buckingham Palace H., over seven furlongs for 3-year-olds and older and dropped from the meeting with the introduction of the G1 Commonwealth Cup in 2015, returns and will open the meeting on the Tuesday, followed by the G1 Queen Anne S. The Silver Royal Hunt Cup (one mile) and Silver Wokingham H. (six furlongs) have been added as consolations for those who miss the cuts for the Royal Hunt Cup and Wokingham and those will be run on Wednesday and Saturday, respectively. The Copper Horse H. (14f, 4yo/up) will be run on the Wednesday; the Golden Gates H. (10f, 3yo) on the Thursday; and the Palace of Holyroodhouse H. (5f, 3yo) on the Friday.

Her Majesty The Queen has consented to these temporary new race names. The Copper Horse is a statue of King George III mounted on horseback marking the end of the Long Walk in Windsor Great Park, adjacent to the racecourse; The Golden Gates are the ceremonial entrance point for the Royal Procession at the end of the straight mile, and The Palace of Holyroodhouse is the official residence of the Monarchy in Scotland.

“We are most grateful to the BHA’s race planning team for their assistance in framing the additional races for this exceptional renewal of Royal Ascot,” said Nick Smith, Director of Racing and Public Affairs at Ascot Racecourse. “We hope these extra opportunities will be welcomed by horsemen, broadcasters and the public at home.

“Under Ruth Quinn, a lot of work has gone into scheduling an appropriate pattern trials programme, beginning June 3, alongside an enhanced 2-year-old programme. We are of course taking nothing for granted in terms of government’s final approval to permit behind-closed-doors sporting events from June 1. We are announcing the programme today, with the dates of the Royal Meeting already public as part of the wider schedule for resumption, so that horsemen can begin their detailed planning.”

The races will be shown each day from race two onwards (race three onwards on the Saturday) on ITV1. All races will be shown on Sky Sports Racing. Racing will begin at 1:15 p.m. Tuesday to Friday and 12:40 p.m. on Saturday, with the final race at 4:40 p.m.