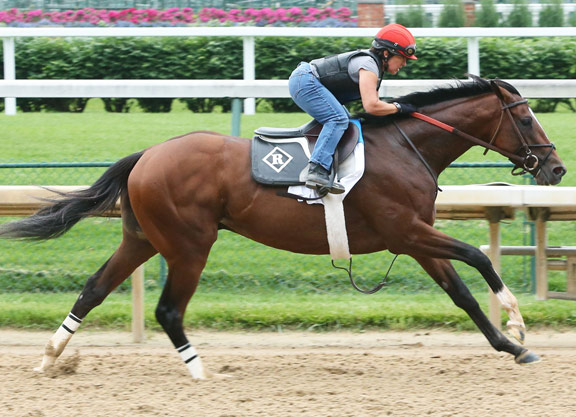 “I wanted a lot of heavy lifting done before we go up [to Belmont],” Romans said. “We want to get an easy work next week up there and just back off a little bit and get them used to being out on the racetrack for as long as it was going to take for them to go a mile-and-a-half around those big turns. You never know what kind of track you’re going to get. It’s either going to be really sandy or if you get natural rain it could be tight.”

Third in the Blue Grass and an also-eligible for the Derby, Cherry Wine’s work came just one week after his runner-up effort in the GI Preakness S.

“I normally wouldn’t work a horse back in a week but he’s been doing so well,” Romans offered. “Cherry Wine will run on concrete, he’ll run on mud, he’ll run on gravel, it doesn’t make any difference. It wasn’t the mud that moved him up, he’s a good horse. He’s a good horse that’ll run on anything.”

The Kentucky native expressed confidence in both of his colts heading into the Belmont.

“In a game where you get beat 85% of the time, you better be halfway arrogant when you enter a horse, so I think they have a big shot,” Romans said. “Brody has already proven to be the best of the two so far–he beat him–but Cherry is taking a step forward. It’ll be interesting; I don’t know which one we’re going to like the best. Maybe we’ll pull off a Black-Eyed Susan.”

“She ran super last week, it’s shaping up to be a great race,” Romans remarked. “The whole card is going to be great. We don’t have a Triple Crown on the line, but everyone that’s a horse racing fan should be up there watching this group of races that they’re putting together. It’ll be as good as the Breeders’ Cup. There’s going to be an emerging star coming out of the Belmont and even without Nyquist it’s going to be a super race.”

Brody’s Cause and Cherry Wine will likely ship to Belmont Tuesday and put in their final breezes at the New York oval Saturday, June 4.