Robin On To French Derby 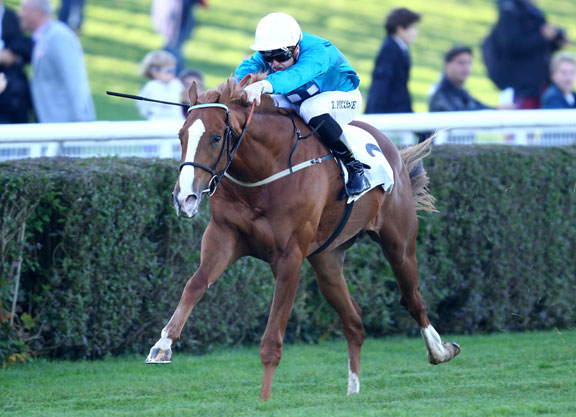 Last year's G1 Criterium International winner Robin Of Navan (Fr) (American Post) may have been beaten on seasonal debut in Sunday's G2 Prix Greffulhe, but trainer Harry Dunlop is far from downcast about the reversal, and indicated the chestnut would move on to the June 5 G1 Prix du Jockey Club as planned.

“He traveled home [to England] safely and trotted up sound on Monday morning,” said Dunlop. “He had a good blow afterwards and he ran to me like a horse who would improve for the run. We'd had a few niggles with him and I hadn't quite been able to get stuck into him like I would have liked.”

“The jockey feels he'll improve,” Dunlop added. “I thought he had it won, to be honest, but just as we started to tie up, Cloth Of Stars began to stay on and he quickened up. The winner had already had a run and had the fitness edge and also I think [trainer Andre Fabre] has got him to settle better this year. When we were beating him last season, he was always very keen.”

Dunlop continued, “It looks like [Cloth Of Stars] is going to go to Epsom and I think he'll be a major player in an open year– don't forget he followed the same path with Pour Moi. All roads for us lead to the Prix du Jockey Club now. I think the uphill finish at Chantilly will really suit, he was just feeling the ground a bit on Sunday; it was as quick as he'd run on. Our dream is still alive, anyway.”