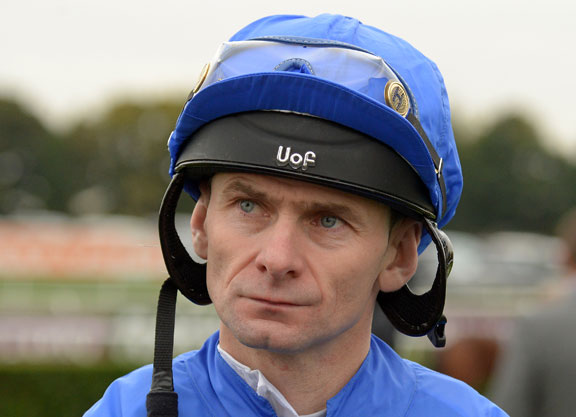 Jockey Robert 'Rab' Havlin registered his 1,000th career winner when Pitcher's Point (Medaglia d'Oro) led throughout in the Ladbrokes Where The Nation Plays Novice S. at Lingfield. Havlin, who has spent a large portion of his career based at John Gosden's powerful Newmarket stable, brought the 10-11 favourite home an easy three-length winner from market rival London Arch (GB) (Fastnet Rock {Aus}). It was fitting that his landmark success came on a horse trained by Gosden.

Among his career highlights Havlin has ridden the likes of Journey (GB) (Dubawi {Ire}), Richard Pankhurst (GB) (Raven's Pass), Mehdaayih (GB) (Frankel {GB}) and Wissahickon (Tapit) to success–and Gosden has always credited him for being a huge cog in the wheel of his highly-successful Clarehaven yard.

Havlin has helped nurture the careers of some of the greats that Gosden has trained in recent years–such as Kingman (GB) (Invincible Spirit {Ire}), Oasis Dream (GB) (Green Desert), Cracksman (GB) (Frankel {GB}) and, of course, Enable (GB) (Nathaniel {Ire}).

The 46-year-old did not hesitate for a second in naming Gosden, when asked on Sky Sports Racing who has been his most important supporter.

“John Gosden, without a shadow of a doubt,” he said. “I think I've ridden nearly half my winners for him. He's not a bad person to have on your side. The whole yard has been fabulous for me–it's a big family, and a big team. The second half of my career has been a lot better than the first half, I've got John Gosden to thank for that really. He's been an unbelievable friend and supporter of mine for a long time–and it's down to him really.”

Reflecting on the highlights of his career to date, Havlin nominated two victories for Gosden in Newbury's G2 Hungerford S.

He said, “I loved winning the Hungerford S. on Richard Pankhurst–I always knew if I got a shot on him, I could win on him. He's quite a quirky horse, unbelievably talented but you had to ride him a certain way. So I was glad to get the chance on him, and he won.

“Then again, on Gregorian (Ire) (Clodovil {Ire}) when I won the Hungerford S. a few years before that, they were probably two of the highlights–but there's been a lot through the years.”

Havlin was relieved to have reached four figures, having been stuck on 999 since mid-February. He still remains full of ambition to chalk off another landmark–by riding his first Group 1 winner.

Reflecting on his 1,000th victory, he said, “It was good to get it out of the way. I was hoping I'd do it before I went on holiday the other week, but anyway, it's come, so that's good. I've still not ridden a Group 1 winner. I won the Italian Derby [on Feuerblitz (Ger) (Big Shuffle) in 2012] the year after they made it into a Group 2. I've come close a few times–but you just keep chipping away, work hard. Hard work pays off.”