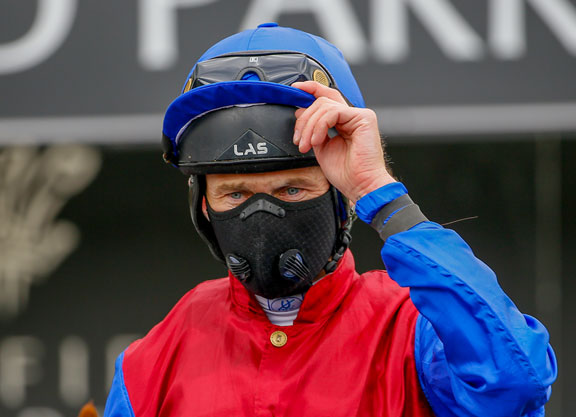 Jockey Rob Havlin was banned for three weeks by the Lingfield stewards after finishing second aboard John and Thady Gosden's 16-1 second string Stowell (GB) (Zoffany {Ire}) on Wednesday evening. The Sky Sports Racing HD Virgin 535 Novice S. was won by fellow Gosden trainee Polling Day (Ire) (Sea The Stars {Ire}) with Frankie Dettori in the irons as the 2-9 crowd's pick. Havlin's mount met with some traffic throughout the race, but was making up ground while under a conservative ride to miss by a head. There was a stewards' inquiry into the finish as they felt Stowell had been given “an apparently tender hands and heels ride” entering the straight.

According to Havlin, his instructions were “to settle the colt and ride him to obtain his best possible position. [Stowell] was a fragile type who had a high knee action, and that John Gosden had instructed him to ride the colt hands and heels and not to use his whip.” From the jockey's point of view, he stated that the winner had idled in front and “therefore it appeared that Stowell had finished faster than he actually had.”

The stewards reported that the trainers' representative said they were satisfied with the ride and pleased with Stowell's debut effort. However, they ruled that Havlin had not taken all reasonable and permissible measures to ensure Stowell obtained his best placing possible. Havlin's ban lasts from May 5-8 and May 10-26.