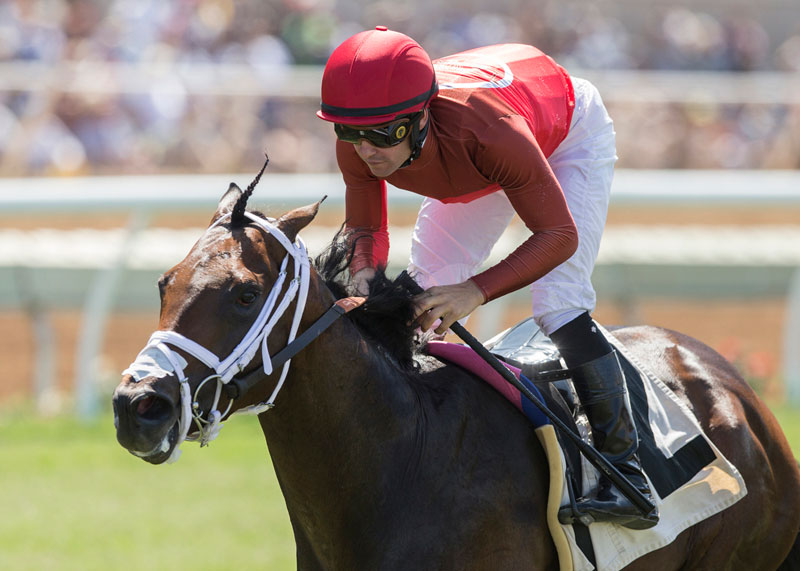 River Boyne (Ire) (Dandy Man {Ire}) seeks his third straight victory Monday in the GI Shoemaker Mile at Santa Anita, but he won't have it easy with 10 other talented runners signed on. Winner of the GIII La Jolla H. in 2018 and runner-up in this even last year, the dark bay had been knocking at the door of another stakes victory for some time, hitting the board in seven black-type events. He finally broke through Feb. 8 in the GIII Thunder Road S. going a mile over the local lawn and made it two in a row with a win in the GI Frank E. Kilroe Mile S. over course and distance Mar. 7. The third-place finisher in that event, Next Shares (Archarcharch), a Grade I winner in his own right in the 2018 Shadwell Turf Mile, also returns here.

River Boyne faces a familiar foe from his past in the form of Raging Bull (Fr) (Dark Angel {Ire}), who beat River Boyne by a half-length in the 2018 GI Hollywood Derby. While winless in his five starts since in 2019, the Chad Brown trainee did not finish worse than fourth in any of those events, including a runner-up effort in the GI Fourstardave H. Aug. 10. He crossed the line fourth when last seen in the GI Woodbine Mile Sept. 14, but was promoted to third after the disqualification of the original third-place finisher.

The Shoemaker is one of the few Grade Is on turf that Brown has not won and, should Raging Bull fail, he has a second chance with Without Parole (GB) (Frankel {GB}). Victorious in the G1 St. James's Palace S. at Royal Ascot last term during his European campaign with trainer John Gosden, the bay finished third in his first start for Brown in the GI Breeders' Cup Mile Nov. 2 and faded to 11th last time in the 1 3/16-mile GI Pegasus World Cup Turf Invitational S. Jan. 25.

Another runner of interest here is native New Yorker Voodoo Song (English Channel). Winner of the 2018 Fourstardave at this distance under the tutelage of NY-based conditioner Linda Rice, the fleet-footed chestnut finished a close second in a pair of Empire-bred stakes last term and was sixth in the open Artie Schiller S. at Aqueduct Nov. 9. Sent to California for a winter vacation with Richard Mandella, the Barry Schwartz homebred was sixth in the 5 1/2-panel GIII San Simeon S. in his lone try for this barn, but gains the services of Mike Smith in this stretch back out to his preferred trip.

GI Preakness S. winner War of Will (War Front) gets back on grass for the first time since his juvenile campaign in 2018. Third in the GI Pennsylvania Derby in September, he was a well-beaten sixth in the GI Breeders' Cup Classic Nov. 2.