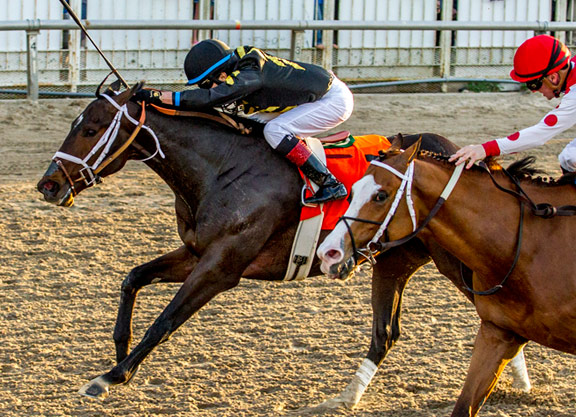 This Saturday, Calumet Farm looks to pull off a bit of an upset in the GII Risen Star with their homebred Santa Cruiser (Dialed In), who broke his maiden last November and ran fourth in his most recent start in the GIII Lecomte S.

Santa Cruiser may go off as one of the longer shots on the board, but if he were to win, it wouldn't be the farm's first upset in the same race.

Three years ago, Calumet's homebred Bravazo (Awesome Again-Tiz O'Gold, by Cee's Tizzy) won the GII Risen Star S. at odds of 21-1 and went on to earn over $2 million.

This year, he retires to stud at his birthplace, having danced nearly every dance over his four-year career while running in the money in six of some of the top Grade I races of his division.

Bravazo will stand for a fee of $6,000 in his first year at stud, beginning his career as the first homebred to take up stud duty at Calumet since the farm was placed under new ownership in 2012.

“He would be the first stallion to have been born and raised and then go off to the track for Calumet and return as a stallion,” said Calumet stallion manager Darrell Hayes. “So he's pretty much a new chapter for Calumet under its new owner.”

Trained by D. Wayne Lukas, the dark bay broke his maiden at second asking as a juvenile before placing second in the GI Breeders' Futurity. He stamped his ticket to the Kentucky Derby with his victory in the GII Risen Star S., taking the three path around the far turn and battling to get the nose over stakes winner Snapper Sinclair (City Zip).

Bravazo got up for sixth in the 2018 GI Kentucky Derby and nearly caught Justify in the GI Preakness S., finishing a close second.

“Bravazo's 3-year-old campaign had 11 starts, eight of which were Grade I and five of which he placed and showed in,” Hayes said. “To me, it was one of the strongest 3-year-old crops, including a Triple Crown winner who Bravazo almost caught at the wire. Bravazo was one of those horses that showed up every day and played his heart out. Whether he won or not, he left everything on the track that he could give.”

“It showed in all those Grade I races that he ran in,” he continued. “They were filled with champion horses. He wasn't scared to run against the tough competition. Bravazo had such a tough campaign as a 3-year-old and had almost double the amount of starts as any other top competitor that he had that year.”

In recent years, the rather obscure cross of Awesome Again with Cee's Tizzy in Bravazo's pedigree has developed into a tried-and-true sire-producing match up.

It started with Ghostazpper. The first and most famous son of Awesome Again to be named a champion, his stakes-winning dam was a daughter of Relaunch – the sire of Cee's Tizzy. Ghostzapper is now on track to surpass his late sire with 12 Grade I winners.

Then came another son of Awesome Again named Paynter. This one was out of Tizso (Cee's Tizzy), a full-sister to Tiznow but also a granddaughter of Relaunch. Paynter would, of course, go on to stand at WinStar Farm as a Grade I-winning millionaire now making headlines as the sire of red hot champion Knicks Go.

Calumet stallion Oxbow (Awesome Again) was bred by Colts Neck Stables and is out of Tizamazing, a full-sister to the dam of Paynter. Their dam, Cee's Song, was bred to Cee's Tizzy eight times, six of those resulting in stakes winners or the producers of stakes winners.

Oxbow was purchased by Brad Kelley's Bluegrass Hall as a yearling for $250,000 in 2011. A year later, the Calumet Investment Group purchased Calumet Farm and leased it to Kelley. Oxbow's win in the 2013 GI Preakness S. marked the first Triple Crown race win for the farm in 45 years.  He now stands at Calumet as a five-time stakes producer and his 3-year-old Hot Rod Charlie ran second in last year's GI Breeders' Cup Juvenile. Oxbow's full brother and now sire Awesome Patriot won the 2011 Alydar S.

A year after Oxbow's Preakness win, Calumet found a similar mating up for grabs at the Keeneland November Sale. Tiz o'Gold was in foal to Awesome Again and, just as the dams of Oxbow and Paynter, was by Cee's Tizzy. Additionally, all three broodmares were out of mares with Seattle Slew as their grandsire.

Calumet Farm brought Tiz O'Gold home for $35,000 and soon after, she foaled Bravazo.

Hayes said that this son of Awesome Again offers unique qualities from those of the aforementioned studs.

“Bravazo has a very attractive, maybe thinner top than a lot of the Awesome Agains,” he said. “He's a good-looking horse with a fantastic head. He brings a little bit more late speed that I think will help him down the road.”

Bravazo now has the entire Calumet team anticipating this new season in the homebred's career.

“We've had some other horses come in that we've acquired during this racing careers, but for him to be an actual bred-and-raised racehorse, foaled on the farm, is unexplainable,” Hayes said. “We're so excited; we're looking forward to getting him in the breeding shed and having his foals come next season.”