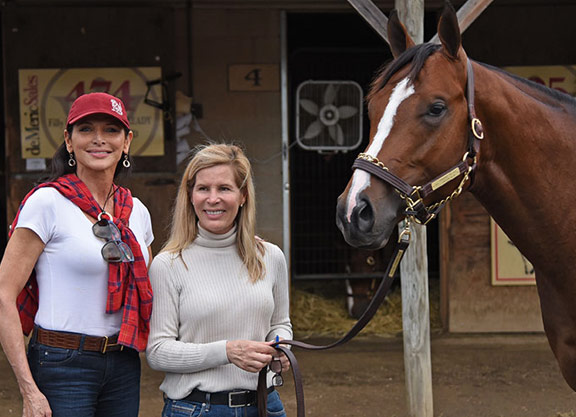 Lady Sheila Stable's Matt King Coal (Cool Coal Man) and Hotinthehamptons (Summer Bird) are both out of consideration for Saturday's GIII Jerome S. at Aqueduct, according to trainer Linda Rice.

Third on debut over the Saratoga turf Aug. 8, Matt King Coal missed by just a nose when switched to a sloppy main track at Belmont Oct. 3 and romped by 5 3/4 lengths next out there Oct. 29.

“Matt King Coal had spiked a fever and has some respiratory stuff going on, so I sent him out for a couple of weeks to the farm to have a little rest,” Rice told the TDN by phone Tuesday afternoon. “I would assume he will miss the first two 3-year-old races, but I think we will have him back for the third one in New York [the Mar. 5 GIII Gotham S.].”

“Hotinthehamptons is not going to be ready to go [for the Jerome],” Rice remarked. “He was actually recently castrated and needs more time.”

With the colts on the bench, a pair of speedy half-sisters, Hot City Girl (City Zip) and La Verdad (Yes It's True), continue to be Sheila Rosenblum and Rice's stable stars. The former set a speedy pace in last Saturday's GI La Brea S. at Santa Anita and was just caught on the wire by the late-flying Birdatthewire (Summer Bird).

“Hot City Girl came out of the La Brea very well,” Rice commented. “She is actually en route back to New York right now. She came out well. We were slightly disappointed that we didn't get the win, but very happy in general. We are pointing her right now towards the [GII] Barbara Fritchie at Laurel Feb. 13, which is seven furlongs. She won [the Safely Kept S.] over that track last month.”

The sophomore's older sister La Verdad had one of her best seasons yet in 2015 starting with six straight black-type victories in New York. The bay went to the GI Breeders' Cup F/M Sprint just one week after winning Belmont's Iroquois S. and was tagged on the line by a late-running Wavell Avenue (Harlington) after setting the early pace.

Rosenblum withdrew the 5-year-old from the Fasig-Tipton November sale with the intention of breeding her in 2016, but–after finishing sixth in the GIII Fall Highweight H. Nov. 26–there is a chance she could return to the track once more.

“La Verdad is not retired yet,” Rice said. “Actually Ms. Rosenblum has been traveling for the holidays with her kids. We will wait for her return to make some decisions. It is possible she will race again. Sheila will be back this week, so we will put everything on hold until she returns.”