Reynier On the Road Again 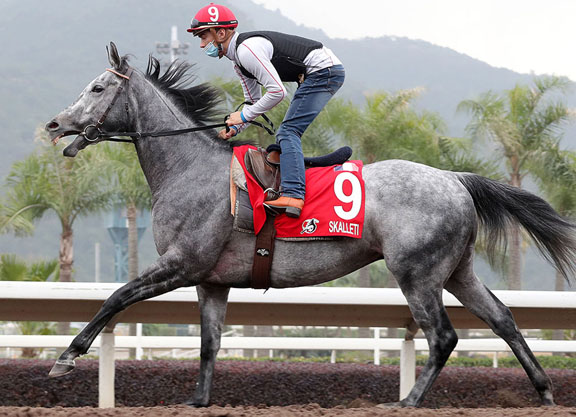 Jerome Reynier may lack the name recognition and firepower enjoyed by his fellow Frenchmen like Arc-winner Jean-Claude Rouget, the legendary Andre Fabre and rising star Francis-Henri Graffard. But the 35-year-old, based in Marseille in the southeast of France, can boast of sharing a spot with that esteemed company on the French trainers' premiership by earnings (north of €2 million in France alone, good for ninth place) and by number of winners (81, sixth most). Reynier can close what by any metric has been an outstanding season this weekend in Hong Kong when he sends out the win machine Skalleti (Fr) (Kendargent {Fr}) in the G1 Longines Hong Kong Cup and stablemate Royal Julius (Ire) (Royal Applause {GB}) in the G1 Longines Hong Kong Vase.

“We were locked down from mid-March to mid-May and the prize money was decreased as well,” Reynier said earlier this week from Hong Kong. “We are pretty happy to have earned a bit more than €2 million in France, so that's a pretty good year. All I want for the guys and the owner I'm lucky enough to train for is to keep consistency, keep horses in good form and good shape.”

Like the aformentioned Graffard, Reynier participated in the Godolphin Flying Start program, working first as a bloodstock agent post-graduation before taking out a trainer's license in 2013. Some four years later, Royal Julius provided him with his first stakes winner, defeating the Graffard-trained Maximum Aurelius (Fr) (Showcasing {GB}) in the Listed Grand Prix Anjou Bretagne at Nantes, and later became the young trainer's first group winner when taking out the G2 Premio Presidente della Repubblica at the Capannelle in 2018. Royal Julius provided the stable a breakthrough winner on foreign soil in the 2019 Bahrain International Trophy and gave a good account of himself when fifth in this year's HH The Emir's Trophy in Qatar.

While the 7-year-old may lack the class of the market leaders for Vase, Royal Julius hasn't made the trip to Hong Kong just for show.

“He's there to be as competitive as he can and with only seven runners, we had to take this gamble,” Reynier commented. “He's used to long travel–he's been to Qatar twice and once in Bahrain, so that shouldn't be a problem. The mile and a half around two turns, like the Emir's Trophy in Qatar, he's showed he likes that kind of trip. Mogul (GB) (Galileo {Ire}) and Exultant (Ire) (Teofilo {Ire}) will be very hard to beat, but I think it's quite open for third place.”

Royal Julius has yet to crack the win column in eight trips to the races this season, but has run with credit, including a third to the recently retired Way To Paris (GB) (Champs Elysees {GB}) in the G3 Grand Prix de Vichy in May and a pair of runner-up efforts in Milan, including the G2 Premio Federico Tesio Sept. 20.

“I quite liked the way he ran in Milan in September, he showed that he is still competitive as a 7-year-old,” the conditioner commented. “I am very happy with him as well, he's in very good shape.”

Skalleti is better fancied of the two Reynier runners as he takes on the likes of Magical (Ire) (Galileo {Ire}) and defending champ Win Bright (Jpn) (Stay Gold {Jpn}) in the Cup. A 12-time winner from just 16 starts, the 5-year-old has kept good company this season, finishing third to the classy Persian King (Ire) (Kingman {GB}) in the June 28 G2 Prix du Muguet at Saint-Cloud before carrying Pierre-Charles Boudot to a hard-fought neck defeat of the Rouget-trained future G1 Prix de l'Arc de Triomphe hero Sottsass (Fr) (Siyouni {Fr}) in the G3 Prix Gontaut Biron – Hong Kong Jockey Club at Deauville in August (see below). Following up with a visually impressive title defence in the G2 Prix Dollar on Arc weekend, he backed up relatively quickly to run the soft-ground loving Addeybb (GB) (Pivotal {GB}) to 2 1/4 lengths in the G1 QIPCO British Champion S., with Magical one spot back in third.

“After he won the Prix Dollar, he stayed up in Chantilly and prepared for the Champion S. It was the first time in his life that he was racing on two weeks' rest,” Reynier explained. “We were not very optimistic, as that's a long trip to Ascot. We didn't know if he was going to be able to race up to that standard because he never raced in Group 1 company before, so we weren't sure about his level. But he did show that he's got plenty of ability and that he's up to that standard and that he can be among the best in the world on the turf. That was a good run.”

Though very much suited to a race like the Hong Kong Cup, connections were wondering whether Skalleti might be over the top, but ultimately they let the horse do the talking.

“We were probably thinking after the race that's he's probably  given enough this year and that we would see him next year, but he came back to the southeast of France in Marseille in very good nick,” Reynier said. “We were starting to think about the Hong Kong Cup and he showed us through the month of November that he was in top shape. We are very happy with him, so we decided to give it a go.”

Skalleti, who has been full of energy in his all-weather gallops this week, is certain to encounter much quicker ground at Sha Tin than he has seen for some time, but Reynier appears not the least bit concerned.

“He has won a Group 3 over a straight mile in Deauville on firm ground [2019 G3 Prix Quincey] and he has gone 1:35 for the mile,” the trainer said. “A mile and a quarter on good ground, I don't think that's a problem for him. He's probably a little better on soft, but he's been showing us that he's able to win on a straight track, he's won on Polytrack, left-handed, he's won Group 2s in heavy ground, so he can handle anything. I think he's just a good horse and I think he'll be very competitive.”

The conditioner is also pleased to have Boudot back in the saddle, not far removed from his two-win day at the Breeders' Cup last month.

“It's very important that someone rides who knows the horse, because he can be a bit anxious,” said Reynier. “Pierre-Charles knows him very well and knows how to deal with him. He was drawn one last time and we knew it was going to be hard to come from behind at Ascot, so that's why we wanted to be close to the pace. Pierre-Charles will be riding him with some confidence.”

A long, strange trip it has been, for both horses and humans, to get to this point. The equine athletes endured a lengthy journey, from Reynier's Marseille base to Chantilly and from that equine center to Liege, Belgium, to board their flight. With no direct option available, there was also a layover in Qatar. Reynier said it was equally challenging for him and his team navigating the waters within the context of a global pandemic.

“We were not sure that my team was going to be able to make the trip until we got tested twice,” he explained. “We are exempted from the 14-day quarantine because we have a work visa, we spent one day in a hotel after being tested on arrival and then we moved into a hotel near the racecourse. We are able to go see the horses two or three times a day, but part of the deal is that we have to stay in our rooms. We won't be able to see the city, but look, we aren't coming here for tourism, we are coming to try to win some races, so we don't mind.”

Judging by his statistics as the end of the year approaches, 2020 has been a wild success, pandemic or not.

“We have improved our results. I started out with four horses as a public trainer and I got up to 40 and didn't really want any more than that,” Reynier said. “I thought that was a good number, because I didn't want a big stable where you lose track of your horses. I was very happy, we had very good results and in September 2018, [Skalleti's owner] Mr [Jean-Claude] Seroul asked me to train his string, with 50 to train. That was a very different scenario because he's got his own yard and his own staff and I'm just kind of managing it all. When we are full with all the youngsters coming in, that's 90 or so horses to train on a daily basis and that's plenty to keep busy. It's the reason we've been able to improve our results year after year and this year, we've got a bit more than 80 wins in France and a bit more abroad.”

It won't be easy, but Reynier and team would surely not complain about adding to that total in Hong Kong this weekend.