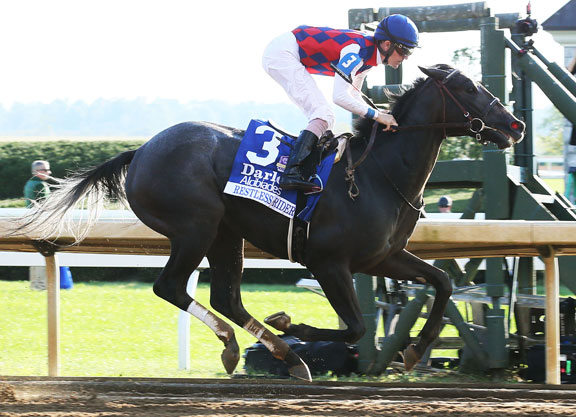 Grade I winner Restless Rider (Distorted Humor–Silky Serenade, by Unbridled’s Song) has been retired from racing and will be bred to Quality Road, owners Fern Circle Stables and Three Chimneys Farm announced Wednesday.

“Restless Rider is representative of what we are looking to do at Three Chimneys–to race top quality horses with like-minded partners, and to share the ups and downs together,” said Three Chimneys chairman Goncalo Torrealba. “We are honored to be partners with Paul Fireman’s Fern Circle Stables, and to have won a Grade I race like the Alcibiades together. She was a top-class filly and an extremely talented 2-year-old. That coupled with the success Distorted Humor has had as a broodmare sire makes her a very exciting prospect. We hope the best is yet to come.”

A debut winner at Churchill Downs in June of 2018, Restless Rider was tabbed a ‘TDN Rising Star’ next out when romping in that venue’s Debutante S. three weeks later. Runner-up in that term’s GI Spinaway S., the $150,000 KEESEP buy captured the GI Darley Alcibiades S. and was second to subsequent champion Jaywalk (Cross Traffic) in the 2019 GI Breeders’ Cup Juvenile Fillies S.

Closing out her juvenile campaign with a second in the GII Golden Rod S., Restless Rider completed the exacta in the GI Central Bank Ashland S. last spring and was shelved for the season following an off-the-board finish in the GI Kentucky Oaks. The Ken McPeek trainee was unplaced in her lone start this term in the GIII Royal Delta S., but retires with a record of 9-3-4-0 and earnings of $894,160.

“She’s a really special filly and we’re proud of what she accomplished,” said McPeek. “Fern Circle winning their first Grade I while partnering with Three Chimneys team was great. I’m sure she will be a great broodmare as well. Her kind of talent is hard to find.”