Reneesgotzip a First for Lanni 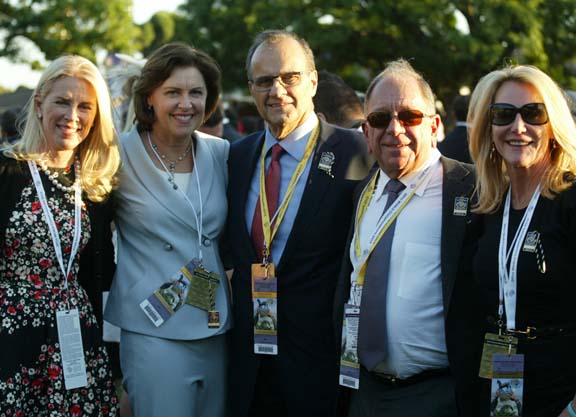 The Lanni Family Trust, which has raced such luminaries as three-time GI Santa Anita H. winner Game On Dude (Awesome Again), will offer its first horse at public auction when multiple graded stakes winner Reneesgotzip (City Zip) goes through the Fasig-Tipton November sales ring next Sunday. The mare (hip 110), in foal to Medaglia d’Oro and selling through John Sikura’s Hill ‘n’ Dale Sales Agency, is also the family’s sole remaining racehorse ahead of a planned reinvestment next year.

The Lanni family purchased Reneesgotzip for $45,000 out of the 2011 OBS April sale with the intention of running the filly in Southern California that summer.

“When we bought her, there were three that we bought together because my husband really wanted to have them run at Del Mar that summer,” Debbie Lanni explained. “We had horses with other trainers and other partners, but he just wanted a little variety. We just wanted to have fun. [Trainer] Peter Miller saw her and really thought she looked good and had potential–she looked fast and had good breeding. ”

The speedy chestnut would not make it to the races until December and Terri Lanni, who passed away three months after the filly’s purchase, never got to see her run. But Reneesgotzip did eventually shine at Del Mar, where she recorded three of her five stakes wins, including a track-record setting victory in the 2013 GIII Rancho Bernardo H.

Despite her delayed debut, Reneesgotzip made an immediate impression with a front-running maiden victory at first asking at Hollywood late in 2011.

“It was certainly worth the wait,” Lanni recalled of the debut. “I wasn’t there, but Peter was there and I was on the phone with him. I was watching it on TV and my mouth just popped open–and his did, too. I thought, ‘Wow. She really does have zip!’”

Reneesgotzip returned with a 7 3/4-length romp in the GII Santa Ynez S. (video) before finishing second in the GI Las Virgenes S. She lost by an agonizing nose after setting the pace in the GI Santa Anita Oaks (video). It wouldn’t be the last time the speedster was just edged out of Grade I glory. Third behind Mizdirection (Mizzen Mast) in the 2012 GI Breeders’ Cup Turf Sprint while making her first start on the lawn, Reneesgotzip returned a year later to just get nabbed on the line by that champion in the 2013 renewal of race (video). She was also second, beaten a neck, in the 2012 GI La Brea S.

“She’s been fun,” Lanni admitted. “It was thrilling. You always think, ‘Ok, we know she is going to be out there, but is somebody going to come catch her? And a number of times, obviously they did, but a number of times they didn’t. You never know. She ran her heart out. She really did and she always came back fine.”

For Lanni, and sons Sean and Patrick, the decision to sell Reneesgotzip was a difficult one.

“I toyed with the idea of keeping her,” Lanni admitted. “Getting into the breeding business is a whole other ballgame–we’ve had a lot of horses in our racing career, but we’ve never had broodmares. It takes time and patience with certainly no guarantees. Yes, it will be very hard to see her go, assuming that she’ll go–nothing is for sure. But it will be hard because she is such a sweet horse and the fact that she is in foal to Medaglia d’Oro is awfully exciting. But if she goes, she is going to bring a lot of joy to somebody else. I had the thrill. Now it’s time for somebody else.”

Lanni credited Sikura with helping her with decisions leading up to the November sale.

“John Sikura has been fabulous in sort of holding my hand and leading the way for me,” Lanni said. “He lets me know what my options are–not telling me what to do, but guiding me in the right direction.”

The November sale won’t be the first time Hill ‘n’ Dale has consigned Reneesgotzip, although the mare brings more star power to the sales ring this time after selling as a yearling for $3,500 at the 2010 Fasig-Tipton October sale

“When you send yearlings who are sort of under the radar and without a lot of hype, and they don’t make a lot of money at the sale and they are sold and forgotten about, it’s a very good lesson that you should never be arrogant or pre-judge the potential ability of any horse,” Sikura said. “They can come from anywhere.”

Of the multiple graded stakes winner, Sikura said, “She turned out to be an exceptionally fast and brilliant race filly with great class who was able to compete and beat colts. She was a wonderful racehorse. She is a good example that you can never tell where they are going to come from and the expectation is that they all have a chance and any one of them can be top notch.”

“[Reneesgotzip] was unusually fast and I think she is very well-complemented in being bred to Medaglia d’Oro,” Sikura explained. “He complements fast mares and she is medium sized, a very nice type and I think physically should suit him.”

Reneesgotzip is the Lanni family’s last Thoroughbred, but Debbie Lanni is already looking ahead to restocking the stable.

“After the first of the year, I’m going to have people looking for me [to buy 2-year-olds],” Lanni said. “I was out of it for a while, but you kind of get the bug again and I’ll be back in it. It was kind of nice to have that little break of not having to worry about them. But I miss it. And my boys they love it, too. They keep saying, ‘Mom you love it, so get back in it.’ We have had tremendous luck.”

But first up is an appointment at Fasig-Tipton.

“I’ll be there cheering her on,” Lanni confirmed. “I’ve never sold a horse at public auction before, but my gut tells me it will be emotional and a little hard to watch, but I’ll follow her.”