Home » Archive » Shared News » Reeves On a Roll at Saratoga

Reeves On a Roll at Saratoga 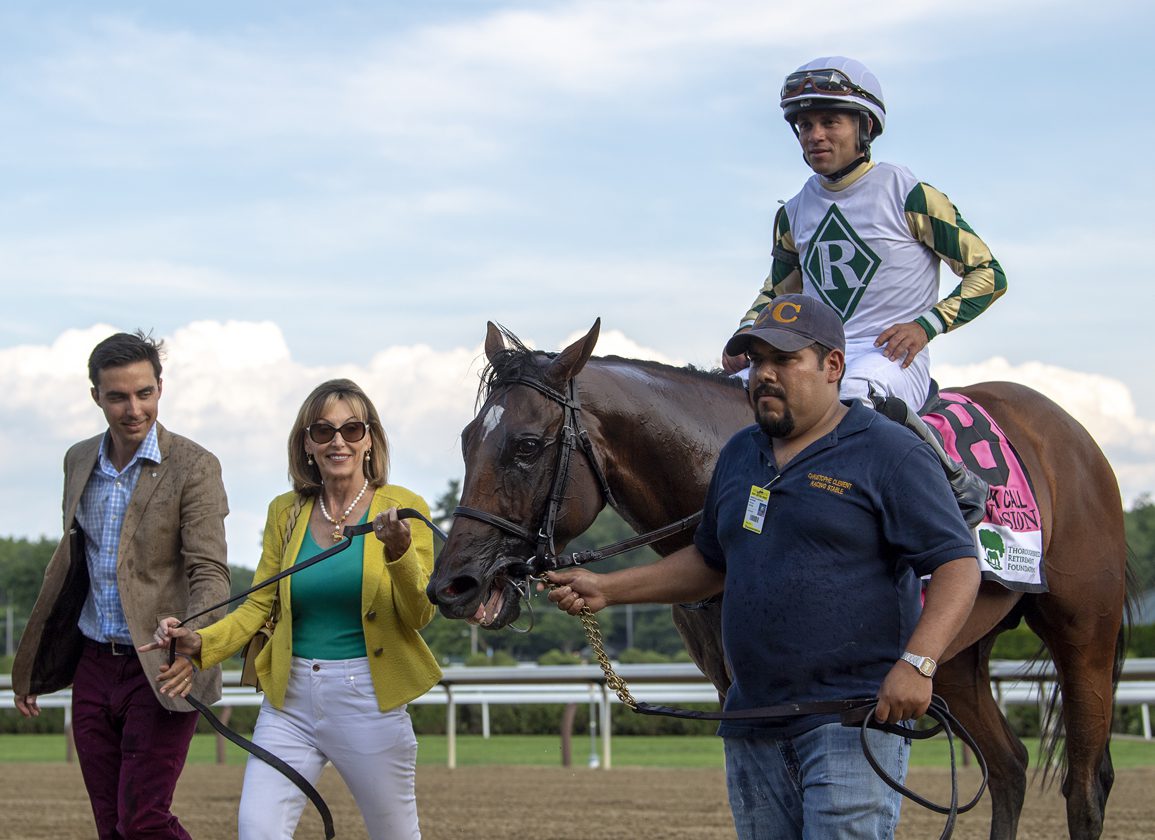 Reeves Thoroughbred Racing is enjoying a tremendous summer at Saratoga as they sit near the top of the leading owners list midway through the notoriously competitive race meet. So far, they've celebrated in the winner's circle alongside three stakes winners and an impressive debut-winning juvenile.

Dean Reeves, a native of Atlanta and the co-owner of a commercial contracting company in Georgia, formed Reeves Thoroughbred Racing with his wife Patti in 2009. The couple has campaigned a long line of Grade I performers since.

Reeves was on the Oklahoma backstretch with a smile on his face and a coffee in his hand the morning after their latest victory this week.

“It's just been crazy,” he said of their success at Saratoga. “We got off to a tremendous start right on the first weekend and we thought wow, how can we keep it going?”

City Man (Mucho Macho Man) got the ball rolling for his owners on opening weekend at the Spa with his definitive victory in the GIII Forbidden Apple S. Trained by Christophe Clement and owned in partnership with Peter and Patty Searless, the 5-year-old New York-bred has earned at least one stakes victory every year since his juvenile season, but the Forbidden Apple marked his first graded stakes score.

“City Man is one of my favorite horses,” admitted Reeves. “We bought him as a 2-year-old and he has continued to get better and better. I think that right now, he's at the top of his game. He's a stunning individual and has really shown a lot of the talent that Mucho Macho Man can give them.”

Two days after Reeves got off the duck at Saratoga with City Man, Big Invasion (Declaration of War) replicated his stablemate's success with another Grade III score in the Quick Call S. The sophomore is on a brilliant win streak this year. After breaking his maiden at Gulfstream in February, he reeled off three straight stakes wins before he stepped up to graded company at Saratoga.

“Big Invasion seems to have a lot of talent,” Reeves said. “He is the kind of horse that looks like he can go five-and-a-half to seven furlongs. He seems to be able to go with whatever the pace is and then he still has that kick at the end. That makes him pretty dangerous.”

Earlier this week, Reeves went to the winner's circle with a third Saratoga stakes victor. Coming off a stakes win at Hawthorne, Isolate (Mark Valeski) led gate to wire to claim the Tale of the Cat S. by six lengths.

Reeves said he felt confident going into the race after watching the 4-year-old work four furlongs in :46 flat–best of 128–two weeks ago.

“He's been training really well,” he noted. “We needed to break well and Tyler [Gaffalione] got him out of the gate and into a great position. He had plenty left turning for home.”

Isolate's victory was cause for celebration on several accounts as it marked the 4,000th win for his trainer Tom Amoss.

“That was so special and so neat for it to be in a stakes race here at Saratoga,” Reeves said. “It couldn't have worked out any better. Tom has done a great job with Isolate and it was exciting to see him win.”

Reeves hopes that their hot streak continues as their stable's top performers prepare to return to the Saratoga starting gate.

This weekend, Big Invasion will compete in a field of seven in the five-and-a-half furlong Mahony S. on Sunday. If all goes well, Reeves said they have their eye on a trip to Keeneland for their turf sprinter this fall.

“We're really looking forward to the race on Sunday,” he said. “I think he'll be some good competition. Down the road, there are possibilities of a race at Keeneland that we would like to do prior to the Breeders' Cup. It's hard to take a 3-year-old in there against those really top horses, but we're going to play it by ear. I'm pretty confident in him.”

While Reeves was hoping to cheer on City Man in the GI Fourstardave H. this weekend, he said they opted to send the turf specialist to the Aug. 26 West Point H., where he will be defending his 2021 title.

“We were between a rock and a hard place,” Reeves explained. “We didn't have quite enough time to come back and catch [the Fourstardave]. The financially smart decision was to wait and run when we could give him more time for the West Point, which has a nice purse. As an owner I wanted to run in the Fourstardave, but fortunately Christophe and [assistant] Miguel have us in the right spot.”

“It helps us as owners to have trainers that are thinking about the dollars and cents,” he said. “Those types of trainers are helpful when they can just be honest with you about your stock. With Christophe, a lot of times as soon as we finish a race he has it in his head what he wants to do next. They really have thought through what they plan to do with each horse in order for it to be successful.”

Last summer, Reeves purchased a farm in Micanopy, Florida outside of Ocala. Managed by Nellie and Chetley Breeden along with Nellie's father Jimmy Gladwell, the farm allows Reeves to venture into acquiring future members of their racing stable as weanlings and overseeing their early days until they make it to training. Isolate, a $70,000 Keeneland November weanling, was one of their first purchases when they began focusing on shopping for weanlings. 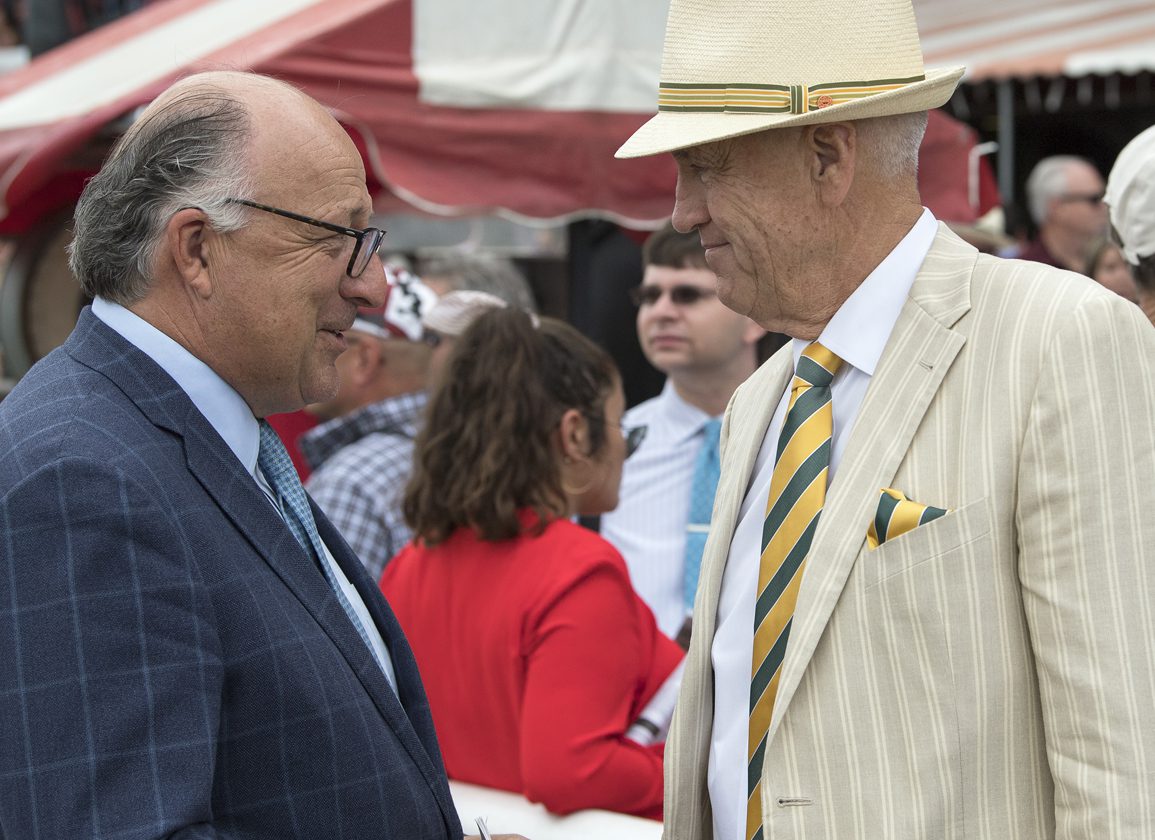 “I'm able to go in there and get a lot of value,” Reeves explained. “Patti and I come here to Saratoga for the New York-bred weanling sale. There's tremendous value and then we can put them in our program, get them to the farm and take our time with them. It gives us an advantage to really get to the horses earlier and see how they progress.”

“We've been involved in the New York-bred program for the last couple of years and that has really helped,” he added. “It's a great program. The purse money is there and we can go get some very nice New York-breds.”

As their racing stable continues to expand, so too has the number of people Reeves said are essential to its advancement.

“Our success has been because of a lot of people doing a lot hard work,” he emphasized. “We've won a lot of tremendous races, but the main thing is we're in it to have fun. Do we want to strive for those big races? Absolutely. Everyone is working hard and I think we'll have some more of those in our future.”

Winning the GI Breeders' Cup Classic with stable star Mucho Macho Man will always be an irreplaceable highlight for Reeves and his wife, but he said that there are a few races they still dream about.

“Patti wants to win the Arc de Triomphe and the Kentucky Derby, so I said, 'Okay, great. We'll put those two on the list and we'll try to win those.' We've been really blessed. The thing is, we're having a lot of fun. Win, lose or draw, we're enjoying it. It takes a team, and we've got a great one.”