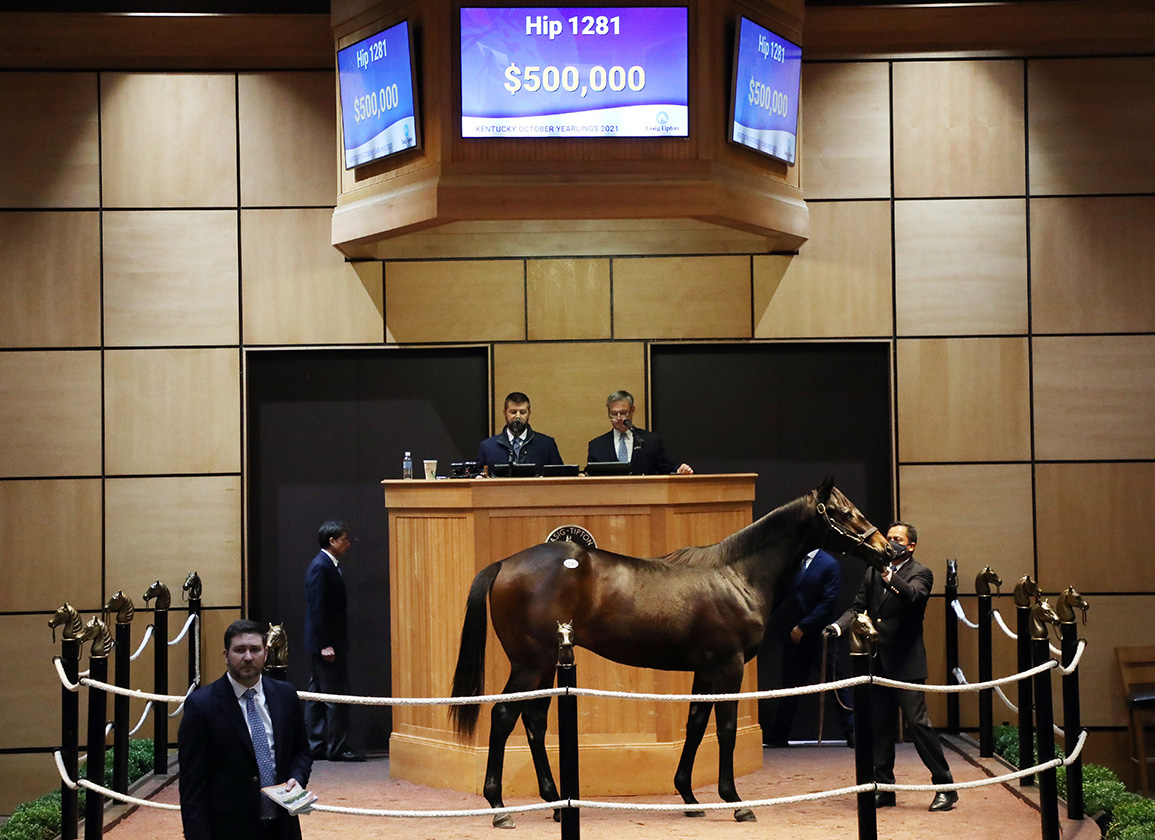 LEXINGTON, KY – The Fasig-Tipton October Yearlings Sale, which had already surpassed its previous highest gross with a day to go, concluded Thursday with new high-water marks for average and median and its lowest buy-back rate since 2013.

“Day four was another outstanding day for the October sale,” said Fasig-Tipton President Boyd Browning. “It was a fitting conclusion to a great horse sale. It's been a great week. The numbers have been tremendous all four days across the board. There were dramatic increases in gross, dramatic increases in average and dramatic increases in median and a pretty meaningful reduction in the RNA rate also. It was a very vibrant marketplace with tremendous depth in the bidding activity. There was a very diverse group of buyers to the bitter end. The sale exceeded our most optimistic expectations.”

With just 205 horses reported not sold, the buy-back rate was a sparkling 15.1%.

Jacob West, bidding on behalf of Vinnie Viola's St. Elias purchased four of the auction's top five lots. West signed on behalf of the partnership of Viola and Mike Repole at a record-equaling $925,000 to secure a colt by Street Sense Wednesday. He made the highest bid of Thursday's final session of the auction when going to $500,000 to secure a colt by Nyquist (hip 1281).

“It's been a really good sale, top to bottom,” confirmed Archie St. George. “We have sold nearly everything through the ring. There is money here, obviously, for good horses, but the middle and bottom market is good. I'd say it's carried on from September. Everything is positive. Long may it last. It's a fun time to sell horses.”

Vinnie Viola's St. Elias Stable added a colt by Nyquist (hip 1281) to its October haul when Jacob West, bidding over the internet, went to $500,000 to acquire the yearling from the St. George Sales consignment Thursday. The dark bay is out of Froyo Star (Rockport Harbor), a half-sister to multiple Grade I winner Sweet Reason (Street Sense) and graded winner Don't Forget Gil (Kafwain).

“He's a beautiful colt,” said Archie St. George. “He's got a lot of quality and presence. I'd like to thank Vinnie Viola and St. Elias for purchasing him and wish them the best of luck with him. We loved him and hopefully Vinnie will love him down the road.”

St. George and partners purchased the colt for $270,000 as a weanling at last year's Fasig-Tipton November sale. The yearling was making his second trip through the sales ring this year after RNA'ing for $295,000 at the Fasig-Tipton Saratoga sale in August.

“He was probably in a bit of a growthy spurt then,” St. George said of the yearling's trip to Saratoga. “He did really well when he came home. The extra month to October helped. He just matured and filled out. To me, he's the whole package and I hope he runs now. We bought him here last November. We gave him a lot of money for him, so it's nice when it turns out.”

St. George has had success selling into a competitive yearling market. Asked if he was concerned about buying weanlings in that market when the calendar shifts to bloodstock sales in two weeks, he said, “It will be tough, but it always is. It's always very competitive to buy foals. There are a lot of good judges out there, people who do well year in and year out. And you have to work the sale hard. We are lucky between my wife, Michelle, and Roger O'Callaghan, we have a great team and we've had a lot of luck together. So we just have to work hard and hope we get lucky.”

Glen Hill Gets Its Gun Runner

After getting outbid on yearlings from Saratoga to Kentucky, bloodstock agent Donato Lanni finally signed a ticket on behalf of Glen Hill Farm when going to $335,000 to acquire a filly by Gun Runner (hip 1584) just two hips before the end of the Fasig-Tipton October sale Thursday night.

“If there is a good horse here, people will wait around for her,” Lanni said. “We've been trying to buy a horse for Glen Hill all year and we've been outbid all year. This is the first horse I bought for [Glen Hill's Craig Bernick] all year. We waited for the last sale of the year and one of the last horses through the ring. He said he wanted to buy something. We stretched a little bit for her, but we had been outbid at Saratoga, September and here. So we feel fortunate we were able to get her.”

The bay filly is the first foal out of stakes-placed Lunar Gaze (Malibu Moon). She was bred by Waymore LLC of the late Tom Conway and Charles Moore and was consigned by Taylor Made. Waymore purchased Lunar Gaze, in foal to Pioneerof the Nile, for $450,000 at the 2018 Keeneland November sale. The mare sold in foal to Vino Rosso for $90,000 at the 2020 Keeneland November sale.

“Gun Runner is off to a great start,” Lanni said. “And this filly was very nice. She had a lot of tone to her and a lot of strength to her.”

Chuck Zacney had been outbid on a couple of horses earlier in the October sale, but came back strong to take home two yearlings in the name of his Cash is King Thursday. First up, bloodstock agent Michael Hernon signed the ticket for the operation at $230,000 on a colt by Bolt d'Oro (hip 1332) and, as the sale was winding down Zacney, bidding on the phone, went to $290,000 to acquire a colt by Street Sense (hip 1580) from the Burleson Farms consignment.

Hip 1580 is the first foal out of Lucky Cover (Medaglia d'Oro), a daughter of multiple graded stakes winner Teammate (A.P. Indy).
“He was a big, strong, athletic colt with a great page,” Zacney said of the colt. “With Medaglia d'Oro on the bottom and I'm a big fan of Street Sense. When I saw him, I loved everything about him.”

The yearling was bred by Nice Guys Stable, which purchased Lucky Cover for $195,000 at the 2018 Keeneland November sale.
Hip 1332 is out of the unraced Gwithian (Street Sense), a half-sister to multiple Grade I placed Solomini (Curlin). He was bred by Clark Brewster and was consigned by Fort Christopher's Thoroughbreds.

“We are hearing a lot of good things about Bolt d'Oro, so we decided to jump in and get one,” Zacney explained. “We thought he was one of the better ones.”

Of his October shopping, Zacney said, “I actually came in last night and bid on one or two earlier in the sale and didn't get them. They were fillies, so I had to step up my game a little bit and jump a little higher for the colts, and I did.”
Zacney said both yearlings will likely be trained by Butch Reid.

A group of four friends, each with sales and racing interests, decided to pool their resources and their talents under one umbrella and Legion Bloodstock was formed. Travis Durr, Evan Ciannello, Kristian Villante and Kyle Zorn debuted the new agency at the Keeneland September Yearling Sale and came away with 17 yearlings for a total of $2,110,000. The group continued to be active at this week's Fasig-Tipton October sale, signing for five yearlings for a total of $373,000. Leading the Fasig purchases was a $250,000 filly by Good Magic.

“Travis Durr is a good friend of ours and he breaks all of our yearlings for us,” Ciannello said. “He approached us and said, 'What if we combine forces? We can work on marketing and getting our name out there.'”

Ciannello continued, “We have another syndicate, and we have other clients that we've bought for in the past, we had never bought under a banner. We've used different agents, but we mostly use different trainers and then the trainer would get the horse. So it just made sense to pool our talents.”

“Kristian Villante is a bloodstock agent, he's been doing this and he has his own clients,” Ciannello said. “Kyle works for Hagyard Pharmacy. He worked for [trainer] Pat Byrne for years and now he manages Chuck and Maribeth Sandford's racing operation. So he brings that background with the horsemanship and the racing side of it.”

Pooling their talents and resources, the group works as a committee.

“At the sale, we will look at everything and everyone will say, 'OK, here are the horses I like.' We will all go off of different short lists and everybody splits up and then we compare notes. Then we do a second look and, if everybody signs off, we go after that horse.”

Joining forces has also allowed the agency to have coverage at, not just all the major sales, but also regional auctions. In additional to Keeneland September and Fasig October, Legion Bloodstock was on the results sheets at the Fasig-Tipton Saratoga Fall Sale, the Fasig-Tipton Midlantic Fall Yearlings Sale, and the Ocala Breeders' Sales Company's October Yearling Sale.

“We buy at every level, from the bottom, the top and everywhere in between,” Ciannello said. “We do some pinhooking. We have a partnership where we bought four yearlings this year all for $30,000 or less and the goal is to sell them. Hopefully they will be precocious, maybe get a start at Keeneland in April and have a good showing and get sold privately. If not, the July Horses of Racing Age Sale here [at Fasig-Tipton] will be the end of the road.”

Have a broad base of clients to draw from also gives Legion Bloodstock the flexibility to put together various partnerships to better compete in a competitive market.

“We will get creative,” Ciannello said. “We will put together partnerships. We aren't afraid to partner with partners. We bought a filly Tuesday for $250,000, a Good Magic filly, and we had to stretch, but we got her. For the perceived good ones, they are hard to buy. So we go back to the drawing board at the end and talk to everybody and say this is what we got and who wants what percentage. It's very flexible and everybody is like-minded. We can say these people will gel well with these people, so we can put together a group. Let's face it, the partnerships are the future. Even the billionaires out there are partnering, so if we want to compete, we have to do the same thing.”

Legion Bloodstock has already gained a toe-hold in the sales arena.

“So far, it's been very encouraging,” Ciannello said of the agency's early reception. “I didn't think it would grow so far this fast, but already we have our hats and people saying, 'Hey, Legion Bloodstock!' So it's been pretty cool so far. Hopefully, some horses from this first group hit. That would be great for us and we can keep it growing.”