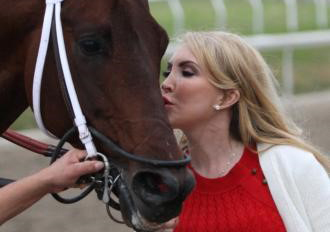 Regional superstars are great for the soul of horseracing. Athletes who have raised the banner of their home state of racing and/or breeding remind the racing public that there often is a team-oriented atmosphere that does a great deal of good for the sport no matter how competitive it becomes between individuals. Canada's iconic Northern Dancer (Nearctic) and granddaughter Dance Smartly (Danzig), Maryland's 26-time stakes-winning legend Little Bold John and the turf-sprinting 25-year-later version of him Ben's Cat (Parker's Storm Cat), Northern California's ill-fated speed demon Lost in the Fog (Lost Soldier), Upstate's unstoppable Fourstardave (Compliance) and– of course–Orange County's global sensation California Chrome (Lucky Pulpit). They were stars on the big and small stages.

These standouts continue to bring a sense of camarederie and–perhaps more importantly–a few new fans to the track. From Pan Zareta (Abe Frank) and Black Gold (Black Toney) of the distant past to the more-recent Risen Star (Secretariat) and Star Guitar (Quiet American), Louisiana has been fortunate to have a long list of such talent over its long thoroughbred history and now will close the chapter on the career of its most popular current star, Brittlyn Stables' Sunbean (Brahms).

Sunbean captured 16 of 27 career starts and $1,172,250 while masterfully managed by one of the rising stars in training, ex-Todd Pletcher assistant Ron Faucheux. Originally in the care of Al Stall, Jr. and briefly Mike Maker through a record of 3-1-0 from his first seven starts, the handsome bay gelding was transferred to Faucheux midway through the 2013 season. From there, the Pelican State homebred product of Evelyn Benoit's breeding program was an absolute force in the region. In his next 13 starts, he won 10 stakes at Louisiana's three major tracks, including consecutive victories in the $150,000 Louisiana Champions Day Classic at the Fair Grounds. He proved his class when finishing a respectable third behind Grade I horses Palace Malice (Curlin) and Normandy Invasion (Tapit) and was a picture of consistency until a tendon tear forced him to third in the $200,000 Louisiana Premier Night Championship at Delta Downs in Feb. 2015.

Against all conceivable odds–and with the help of cutting-edge stem cell surgery at Rood & Riddle Equine Clinic–Sunbean returned one year later to once again prove dominant against Louisiana's dirt routers, while also flaunting his versatility with a victory in the $75,000 Louisiana Turf Classic at Louisiana Downs. Unfortunately, in an attempt to win a third Classic, his tendon flared up again when he failed to hit the board in what would be his final start Dec. 10.

“He meant everything to me and my team,” Faucheux said. “It hurts that he can't train and race anymore. He was so consistent and he's the type of horse who got you going in the morning. You loved watching him train and he just has a great way about him. To lead a horse over there and know that every time he was going to run his race and show how great he was, that is an incredible feeling.

“He was 100% going into the last race and for whatever reason he tore the tendon,” Faucheux continued. “He's sound on it now and happy, but I don't think we should bring him back a second time. He's been so good to us and given us everything. I don't want to put him in any kind of jeopardy.”

Bred and owned by Benoit, the First Lady of Louisiana racing, Sunbean followed in the footsteps of homebred Star Guitar, who won 22 stakes within a 30-race career that earned in excess of $1.7 million. While physically unable, due to his equipment change, to follow him to the breeding shed, Sunbean may instead go the way of Brittlyn's Grade II winner Gantry (Pulpit), who won seven stakes and was a Breeders' Cup Sprint alum for Faucheux. Said dark bay gelding is now a pony for the Faucheux stable.

“(Sunbean) is still here in my barn and we will probably send him to be a horse for a bit before he maybe comes back (to possibly be a pony),” Faucheux said. “I wouldn't be surprised to see him become a show horse with how beautiful he is. With Gantry you knew he was kind and could be a pony. Sunbean is more frisky, so only time will tell with that.

“He's a smart horse and I actually think he felt it happening during the race and protected himself,” Faucheux continued. “In present-day horse racing it's so hard to have a horse consistently run like he did; always to his best. You knew when he didn't fire last time, there had to be a reason and (getting injured) almost hurts more the second. Before it was kind of sporadic and we dealt with it and gave him time and he came back. This time you know that this is it.”

Benoit, who spends her time between caring for her husband, rejuvenating historical New Orleans mansions and developing the stallion career of Star Guitar, is understandably in the purgatory between disappointed and proud of Sunbean's accomplishments.

“He's just been a phenomenal horse and we're so sorry to lose him as a racehorse,” she said. “We knew he was special when he was a baby and when you have a horse like him, it is just an incredible feeling. He's the kind of horse you dream of and I wish I had many more just like him. He was more aggressive than Star (Guitar), but still the same classy type and just had the looks and attitude you wanted.

“When he got hurt the first time, he was on pace to beat Star Guitar's records, but it was very sad to see him get injured,” she continued. “For him to come back from that injury and Rood & Riddle to ask if they could put him on their wall of fame–this little Louisiana-bred with a big heart–that meant a lot. Then he came back and proved it again on the racetrack. That was incredible.”

Benoit remains focused on the future, even with this recent setback. Her stable includes mares in Louisiana and Kentucky and a pair of well-bred stallions-to-be. Multiple graded stakes winner Clearly Now (Horse Greeley), a stunning nearly black Claiborne Farm-bred millionaire, is still in training with aiming toward stakes company for Faucheux. A few Fair Grounds barns down, Al Stall, Jr.-trained Forevamo (Uncle Mo), a multiple graded stakes-placed 4-year-old half-brother to champion Musical Romance (Concorde's Tune), is a few works into what looks to be a promising campaign.

“I have big hopes for Forevamo and Clearly Now, as racehorses and stallions,” Benoit said. “I've purchased some fantastic mares for them and Star Guitar. I'm trying to build up Louisiana racing and I believe in it. It's my home and I have to try and think positive, even with all this.”

Benoit has been aggressively pursuing excellence recently for her bayou-based operation. In addition to having two foals each by Curlin (Smart Strike) and American Pharoah (Pioneerof the Nile) on the way, she recently was active at the Keeneland November sale, purchasing multiple stakes winners Moment of Majesty (Saint Liam) for $850,000 and Five Star Momma (Five Star Day) for $550,000. She also privately purchased runaway $100,000 Louisiana (Filly) Futurity winner Mr. Al's Gal (Salute the Sarge) last week.

“We're going to keep Sunbean happy and I'm going to try to make things better in Louisiana,” Benoit concluded. “Breeding horses my passion and I simply love it. They always say the best ones come out of Kentucky and that makes me even more determined to change that.”