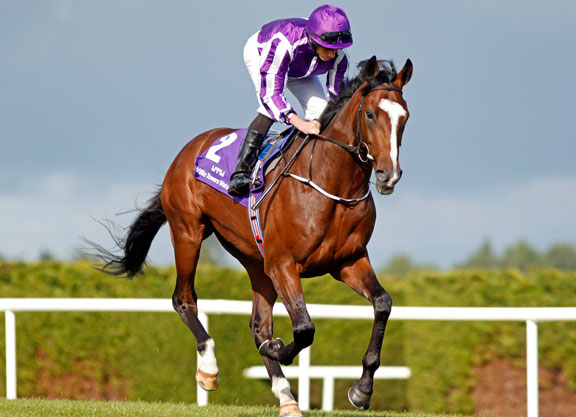 Outside of Ballydoyle, Highclere Thoroughbred Racing's unbeaten Luminate (Ire) (Lawman {Fr}) holds the strongest claims on the evidence of her impressive success in the G3 Prix de Conde over nine furlongs at Chantilly Oct. 7, where Godolphin's Stage Magic (Ire) (Dark Angel {Ire}) was disappointing when last of six. Previously, he had beaten the subsequent G1 Prix Jean-Luc Lagardere runner-up Olmedo (Fr) (Declaration of War) in Chantilly's G3 Prix des Chenes over a mile Sept. 3 and he needs a return to that form. Trainer Charlie Appleby believes that is on the cards. “Stage Magic was disappointing on his last start, but has done nothing but please us since then,” he said. “A mile and a quarter should suit him and he is proven on soft ground, while we are putting on some cheekpieces to aid his concentration. His preparation has gone well and a return to the form of his win in the Prix des Chenes would make him competitive.”