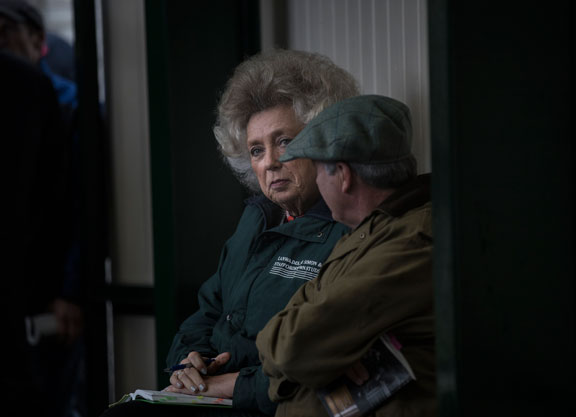 At one of Britain's higher-profile independent studs, it is perhaps no surprise that roughly 50% of the home broodmare band will be visiting one of the farm's three resident stallions.

Lanwades is home not only to Sir Percy (GB), Sea The Moon (Ger) and Bobby's Kitten, but also to an evolving collection of mares which, over the course of almost four decades, have been responsible for 12 Group 1 winners among an abundance of black-type performers.
The band reaches farther than just Lanwades' Newmarket headquarters, however, and as well as nine external stallions booked in the UK, the stud's owner Kirsten Rausing will be using 10 different stallions for 15 Irish-based mares, Anodin (Ire) and Kendargent (Fr) in France, and Kitten's Joy and Stormy Atlantic in America.

The latter has proved significant in recent high-level victories for Lanwades-bred horses as the damsire of the Hong Kong Group 1 winners Time Warp (GB) and Glorious Forever (GB). The success of the full-brothers is lent a touch of poignancy by the fact that their sire Archipenko (Kingmambo) died young after covering eight books of mares at Lanwades. In his absence, their dam Here To Eternity, who traces back to the influential Special, dam of Nureyev and, significantly for Rausing, grandam of Archipenko, will be sent this year to Ireland to be covered by Galileo (Ire) having been barren last year.

“The success of Time Warp and Glorious Forever is exciting, and obviously if the late, lamented Archipenko had still been alive, she would have spent the rest of her life with him,” says the breeder. “It was an old-fashioned constructed mating. People didn't think that much thought had gone into it, but in fact several generations of thought had gone into it, because I kept breeding back to Special. Those two horses have Special four times, if not five, in their pedigree. So they are closely inbred to a mare that never won a race. But it seemed to have worked, and the thing is they were two really good individuals as well. Time Warp was the mare's first foal and he made €36,000, and when the horse was so nice I bred the mare right back to the same stallion, and the following year she had a similar colt.”

Here To Eternity's 17-year-old dam Heat Of The Night (GB) (Lear Fan) remains on active duty and is in foal to Bobby's Kitten with a cover by Sea The Moon planned. Her erstwhile partner, the 25-year-old Stormy Atlantic, remains an old favourite.

“He's been very kind to me and I've been loyal to him,” says Rausing, who this year is sending him Karamela (Ire) (Mastercraftsman {Ire}). “I've used him five times, and bred four winners, one of which of course in turn bred me two Group 1 winners. The mare I'm sending this year is a mare incidentally bred by Airlie Stud but I found her in Argentina, where she had won seven races. She traces to Special, and so I sent her to Stormy Atlantic in her first year, that would now be a 2-year-old. And she had a colt, which died at a week old, so I am really doing the experiment mainly because it's a mating that repeats the pattern that produced Time Warp and Glorious Forever. Stormy Atlantic is 25 but he had a Breeders' Cup winner last year. I'm just hoping that the mare does the right thing and conceives a filly.”

The family perhaps most instantly synonymous with Lanwades is the 'AL' dynasty, stemming from Alruccaba, the foundation mare purchased in partnership by Rausing and Sonia Rogers in 1985. Her daughter Alouette (GB) (Drashaan {GB}) was named champion broodmare for producing two champion fillies on the track–the Alzao full-sisters Alborada (GB) and Albanova (GB)–and they, along with numerous others, have ensured that this line flourishes still, at home and abroad. In December, the final offspring of Alborada, My Nordic Hero (GB) (Archipenko), won the G3 Festival S. at Rosehill for Chris Waller. The 7-year-old was formerly known as Algonquin when winning four consecutive races in Ireland for Rausing and Jim Bolger.

Rausing says, “I have really cut down on numbers. I'm down 25, 30%. I have to look at the market all the time. People say, “Oh well, you're an owner-breeder,” but I'm not. I have to sell all the colts and so when I do a mating, I have to figure that 50% of the time I'm likely to get a colt, which has to be sold. And, therefore, with the market as it is, I'm now retiring mares that I would normally probably have covered another few years.”

She continues, “But the 'AL' family, there are plenty of them, about 15 or so, probably, and most of them are in prime condition. Three of them are going to Sea The Stars (Ire), one to Roaring Lion, one to Kendargent, one to Lope De Vega (Ire), two to Sir Percy, and one to Expert Eye (GB).”

The trio booked to Sea The Stars comprises the Group 3-placed Alamode (GB) (Sir Percy {GB}), listed-placed Albaraka (GB) (Selkirk) and listed winner Altesse (GB) (Hernando {Fr}). Meanwhile the treble stakes winner All At Sea (GB), a Sea The Stars daughter of Albanova who is currently carrying to Dubawi (Ire), is one of two mares going to a rival son of Kitten's Joy, Roaring Lion. The Tweenhills stallion will also cover Seychelloise (GB) (Pivotal {GB}), a great grand-daughter of another key Lanwades matriarch, Sushila (GB), the dam of Petoski (GB). Seychelloise last year visited Lanwades' own Kitten's Joy stallion, Bobby's Kitten, who will cover several members of the same family this year, including the listed-placed So In Love (Smart Strike) and G3 Prix des Reservoirs winner Songerie (GB) (Hernando {Fr}), who last year visited Darley's Fast Company (Ire). The reverse order of those two stallions is in play this year for Alboretta (GB), a Hernando half-sister to Group 3 winner Alla Speranza (GB) (Sir Percy {GB}), who is herself currently in foal to Sea The Stars and booked to Muhaarar (GB).
America's champion sire Kitten's Joy came close to standing at Lanwades before his move to Hill 'N' Dale Farms and he is one of the duo of Kentucky based-sires on Rausing's list this year. His Lanwades mate is the maiden Na Balada (BRZ) (Forestry), thus emulating the cross of the GI Breeders' Cup Turf Mile winner Bobby's Kitten.

She says, “I have a mare in foal to Kitten's Joy, and I'm sending a group-winning mare by Forestry out of a sister to [1000 Guineas winner] Natagora (Fr), so that's quite international. And she won her group race, admittedly in Brazil, but as a 2-year-old.”

Among the new names on the list of stallions to be used this year is Overbury Stud's Cityscape (GB), a son of the former Lanwades stalwart Selkirk, who will cover Kesara (GB) (Sadler's Wells) and Memory Lane (GB) (With Approval).

“He's had some really remarkable results with limited opportunities and so I am sending two mares to him, one of which has a special affinity with Selkirk,” says Rausing. “I liked Cityscape and the horse has done incredibly well, and fair dues to Simon Sweeting and his fellow owners.”

Along with Here To Eternity, Rausing's G1 British Champions Fillies and Mares S. winner Madame Chiang (GB) (Archipenko), from the same family, is the second of her mares to be visiting Galileo, and the 8-year-old is currently carrying to Lope De Vega.

She says, “I'm very grateful to Coolmore for letting me in with those two mares.”

“I have a nice early filly foal by Churchill out of Group 1 winner Lady Jane Digby,” adds Rausing. Lady Jane Digby (GB) (Oasis Dream {GB}), whose seven wins came in Britain and Germany, is among the group of the home team to be visiting Sea The Moon this year.

“I'm very fortunate to have him here,” says Rausing of the promising young sire she stands on behalf of his breeders Heike Bischoff and Niko Lafrentz of Gestut Gorlsdorf. “He's almost a copy of his sire, but slightly less heavy and not quite so big as Sea the Stars. We've been inundated with requests from breeders this year and his book is solidly full and wait-listed. The Germans are very excited because he was not only champion first-season sire last year but also champion sire of 2-year-olds, and sire of the champion 2-year-old, in spite of not actually physically being in Germany. It will be interesting to see how he does [this year]. I would certainly hope that he can have a winner of the German Derby.”

While the breeder is looking forward to the debut of Sea The Moon's son Pondus (GB), who is out of Lady Jane Digby's three-parts sister Diablarette (GB) (Green Desert) and trained by James Fanshawe, she will of course once again be giving the stallion strong support. Diablarette has visited him in each of the last three years and, in addition to those already mentioned, other Lanwades mares to be visiting Sea The Moon this year include the G2 Park Hill S. winner Alyssa (GB) (Sir Percy {GB}), listed winner and Group 3 producer Alvarita (GB) (Selkirk), and Chinoiseries (GB) (Archipenko), a winning full-sister to Madame Chiang.