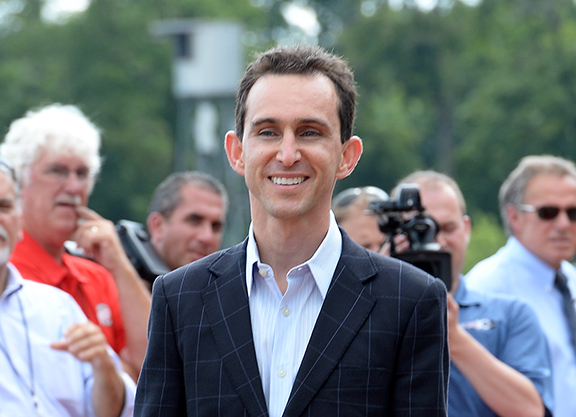 According to a Pew Research analysis, nearly six in 10 Hispanic people living in the U.S. are millennials or younger. In addition, a Nielsen report revealed that 94% of Latino males are sports fans and 56% consider themselves to be avid fans.

A nearly untapped market was discovered. An idea was born: Exacta Box.

“These millennials, regardless of who they are, they're into watching stuff on their mobile phones and now they also watch a lot of sports on their devices,” Dominguez explained. “So there is this need to connect with this audience in a special way.”

Through a friend, Dominguez was introduced to sports analyst Jose Francisco Rivera.  A fellow Venezuelan native, Rivera called races there for several years before moving to the States and serving as an MLB play-by-play commentator for ESPN Deportes Radio for 11 years.

“He's a huge sports fan,” Dominguez said. “But I would say his main sport is horse racing, and he understood that there was a need to provide the Hispanic market with great content for horse racing. He came to me and said, 'Ramon, I have this idea.' So we started collaborating and that's how Exacta Box was born.”

Last November, Exacta Box, a YouTube channel dedicated solely to Spanish-speaking horse racing enthusiasts and hosted by Dominguez and Rivera, released its first video leading up to the 2020 Breeders' Cup.

Their initial video instantly received hundreds of views and the comment section exploded as viewers expressed their excitement on the new project.

The channel has only grown from there.

“The feedback has been great,” Dominguez reported. “It has be so positive. People say, 'Oh my gosh, we're so happy that you guys are doing this.' This platform is something that certainly we're happy to bring forward because it encapsulated so many different things that are needed in this sport and are perhaps brought forward by other people, but it's very fragmented. So to have it all in one place, I think it's very important.”

Following big weekends in racing, co-hosts Dominguez and Rivera recap major races and discuss their thoughts on the hottest horses in training. Their most recent release reviews Saturday's performances in the Blue Grass, Wood Memorial and Santa Anita Derby.

“Jose [Rivera] is a racing fan and somebody who has been behind the microphone and the binoculars watching these races,” Dominguez said. “As a jockey who has been in the stirrups for many of these races, I can kind of bring a different perspective.”

“These interviews are interesting not only to our viewers, but also to Rivera and I as horse racing fans ourselves,” Dominguez said. “Despite having spent most of our lives in the industry, each and every one of these professionals bring along so many different sets of skills that are unknown to us. We did one interview with Eduardo Luna, who was groom for, among many amazing horses, American Pharoah, Justify and Arrogate. It was amazing to hear firsthand from someone who takes care of these horses and learn the little details about taking care of these amazing athletes.”

Another popular interview was with up-and-coming jockey and veterinarian Ferrin Peterson.

“Ferrin Peterson is one that was absolutely awesome because of what an amazing person she is and what she has done in her short life. She is still so young, but she brings a great understanding of what is important in this sport in terms of promoting it. She said she wasn't even big into social media, but she understood that her role could be important in terms of promoting the good of the sport. Somebody like her is amazing because she can serve as a connector to the people who perhaps don't know much about racing or have the wrong ideas about racing.”

Through these spotlight interviews, Dominguez said they hope to make racing a more approachable sport for newcomers.

“Our goal is to bring a fresh aspect of horse racing to fans in a way that resonates with them,” he said. “Stories sell. To me, stories are so important for us and regardless of what the story is, it's something that most people can relate to themselves.”

Dominguez said these Spanish-spoken interviews help their audience further connect with the people they may see on the television screen on race days, but have difficulty learning about during an English broadcast.

“It is different when you watch something and it's sort of beyond your reach,” he said. “But when you feel like there is an understanding of who this person is and that you actually know them because you've watched a few interviews, it will give you the ability to really be glued to what you're watching because there is this connection with the person. That is in essence what we are trying to achieve–for the person to understand these athletes and fall in love with the sport.”

Dominguez added that through this experience, he has learned there are many fans within the Hispanic community who have a lot of confusion on even attending the races.

“When you talk to somebody who doesn't know much about horse racing, a lot of times they think you need to be reached in order to even come to the track,” he explained. “So with little things like that, we can bring more clarity for people to learn that this is an inclusive sport that you can come in and watch and it doesn't really cost you anything.”

When asked if he believes the Hispanic community often goes forgotten by racing media, Dominguez replied, “Absolutely. It has been an audience and a community that has been overlooked for way too long. It's a matter of studying what is really important to them. Millennials are big-time into watching sports events on their devices and nowadays I feel like the attention span for people in general is very short, so we have this opportunity to bring them content through streaming.”

Asked of his long-term goals for the project, Dominguez mentioned partnering with major racetracks to stream races in Spanish as well as creating a platform to offer their content in a podcast format.

“We're certainly full of ideas, but at the same time, very open to collaborate with anyone in the industry who has the same goal of promoting our sport,” he said. “We are one family and that includes anyone who loves this sport, so anyone who perhaps has a story or experience that needs to be told, I would definitely love to know about it.”

The TDN has recently collaborated with Exacta Box to stream their videos on the TDN website at https://www.thoroughbreddailynews.com/live/.