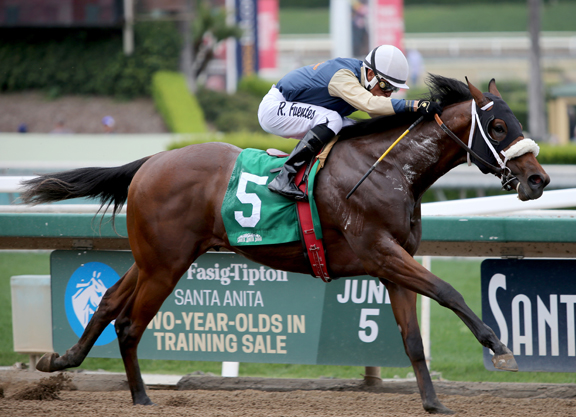 A field of five line up for Saturday’s GIII Sanford S., Saratoga’s opening stakes race for juvenile colts and the horse to beat is arguably Charles Bartlett and Greg Pappas’ Raging Whiskey (Bourbon Courage). Previously trained by Luis Mendez, the bay rallied from the back of the pack to grab third in a May 19 maiden special event at Santa Anita that has already produced two prominent juvenile stakes winners in Fore Left (Twirling Candy) and Phantom Boss (Shackleford) this season. Fore Left became one of the early leaders of the juvenile division upon his impressive victory in Belmont’s June 7 Tremont S. while Phantom Boss annexed the Churchill spring meet’s GIII Bashford Manor S. June 29. Raging Whiskey found the winner’s circle June 2 in a decisive front-running performance before changing hands in a private sale after being RNA’d for $120,000 at the Fasig-Tipton Santa Anita Sale. The Maryland-bred joins the barn of top conditioner Doug O’Neill as he takes the starting gate in the Sanford.

By Your Side (Constitution), a $240,000 yearling purchase at the Keeneland September Sale, enters the Sanford looking to become the first stakes winner for his red hot freshman sire. The Anderson Stables’ runner prevailed over a contentious field of maidens in his June 14 Churchill debut for conditioner Eddie Kenneally.