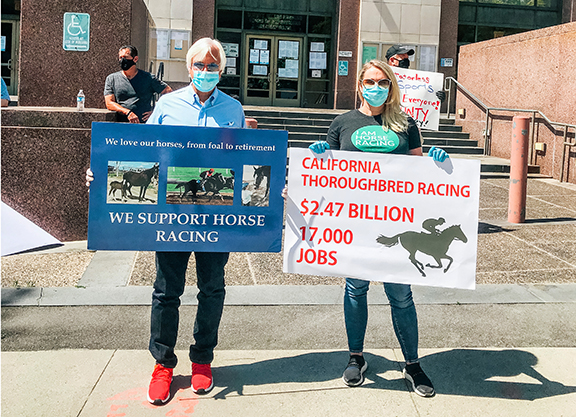 Bob and Jill Baffert Outside the L.A. County Supervisor’s Office | I Am Horse Racing

Santa Anita’s backstretch community, led by such trainers as Bob Baffert and Doug O’Neill, descended upon downtown Los Angeles Tuesday morning outside the LA County Board of Supervisors meeting building to put a human face to calls for the resumption of live racing at the Arcadia track. Around 50-60 people attended the demonstration.

In a speech captured on video–and posted online–Baffert said that he’d like to see racing open again to help the families who work so hard on the backstretch and who are following proper social-distancing protocols.

The board of supervisors meeting Tuesday contained several agenda items related to the possible reopening of the county’s economy, but nothing specifically related to horse racing.

According to Derek Lawson, jockey Flavien Prat’s agent, the gathering was intended to highlight the economic importance of kick-starting live racing at Santa Anita, and what he described as the hypocrisy of the county in allowing other venues–like the LA County Arboretum situated opposite the track–to remain open during this time.

Indeed, TDN recently outlined the fragility of racing’s infrastructure in California without the sustained income from live racing, and its possible impacts on a variety of services, like backstretch worker healthcare and the state’s retired racehorse program. “We’ll see what happens,” said Lawson, about the protest.

“Everyone was very respectful,” Lawson added. “They all had their faces covered. Some wore gloves. They were all keeping their distance.”

Oscar de la Torre, whose family has worked in horse racing, helped coordinate the event. “What we know is Santa Anita is on the radar in terms of being a part of the phase-one economic recovery plan for the county,” he said.

“We’re hopeful that horse racing will lead the way in regards to professional sports coming back without spectators,” he said. “Having live televised competition is important for many. And horse racing is the best test case–all the data is on our side.”

Live racing at Santa Anita was formally canceled on March 20. Since then, the track has remained open for morning training, but with tight restrictions in place as to access. TSG’s sister track in California, Golden Gate Fields, has also suspended live racing. However, evening racing continues at Los Alamitos in Long Beach, California.

Earlier this month, Santa Anita officials presented to county officials a detailed plan outlining the steps the track would take to protect the health and safety of participants if live racing were to resume at the track, including a protocol requiring all jockeys involved in training or racing to relocate to onsite housing to live within a self-contained community.

The fact that Los Alamitos has been able to conduct live racing safely is another feather in racing’s cap, said de la Torre. “It shows that it can be done-we can keep the public safe and still protect the horses and the workers with the funding that live racing provides.”

Lawson said that the crowd stayed for around an hour. His video of Bob Baffert on Twitter has already been watched thousands of times, and it shows the news trucks across the street, along with the crowds of demonstrators in masks.

“The local television stations could not come where we were into the crowd, so they stayed across the street from the supervisors’ building and they stood over there and they filmed us from there. It was well received and as far as what we were trying to put across.”

Lawson’s video shows Baffert, carrying a blue sign that reads, “We love our horses from foal to retirement. We Support Horse Racing. ” Jill Baffert was also there with a sign reading, “California Thoroughbred Racing. $2.47 Billion. 17,000 jobs.” Baffert addressed the crowd, wearing a mask and gloves.

“There are a lot of people suffering out there right now,” said Baffert. “It’s unnecessary that more people can’t work, especially at Santa Anita, where it has been COVID-free. It’s safe and we’re doing everything possible, and there haven’t been any problems. I’d like to see families be able to get back to work. I know it’s tough on everybody out here, and I’d like to thank the supervisors who are going to look it over and check it out and who are reviewing our proposals, and hopefully we can get back to work. We need our groups working back there and we need racing open again. The horses are their life. It’s not a job, it’s a way of life for them and that’s why we work so hard and that’s how they put their kids through school. they have to be with these horses 24/7. I feel it’s very unfair right now that they’re not being able to race their horses because we’ve passed all the protocols. So it’s a very safe environment at Santa Anita. We’ve proven that. We’ve proven it at other tracks that are racing, so let’s hope that the L.A. supervisors-I know they have a lot on their plate, but hopefully this will bring a little bit of attention to it, and we need to start racing.”

The speech was greeted with a huge round of applause from the crowd.