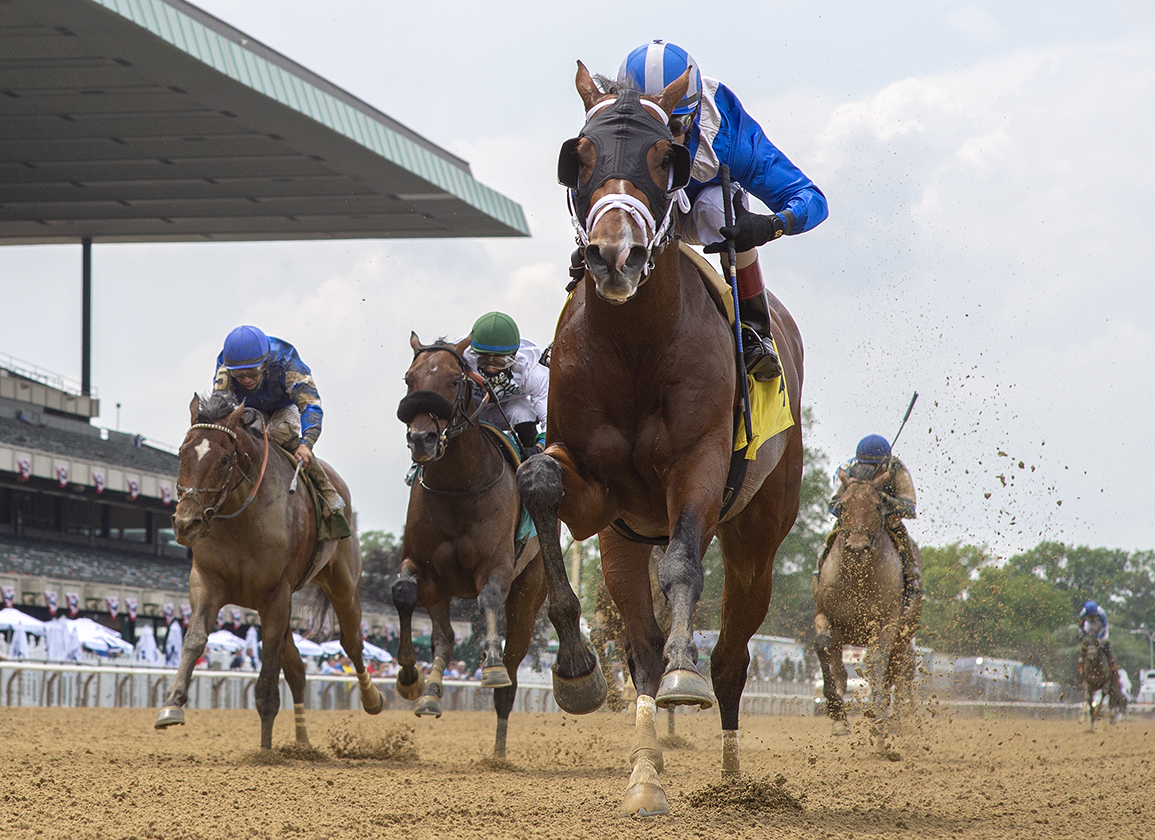 Annette Allen and Helen Alexander's Montauk Point (Violence) makes his first start for the Shug McGaughey barn here. The $550,000 Fasig-Tipton Select Yearling Showcase grad–the priciest yearling by his Hill 'n' Dale sire to sell last season–is half to none other than 2019 GI Test S. and GI Breeders' Cup F/M Sprint heroine Covfefe (Into Mischief), who garnered both champion 3-year-old filly and champion female sprinter honors for that campaign. The chestnut hails from the uber deep family that traces back to Broodmare of the Year Courtly Dee.

Uninvited Guest (Distorted Humor), a $400,000 KEESEP yearling, was second at 8-5 in his Monmouth unveiling June 20. He's out of MSW/GSP turf router and 'TDN Rising Star' Interrupted (Broken Vow). Interrupted is a daughter of of MSW/MGSP Alternate (Seattle Slew), making her a half to GISW Higher Power (Medaglia d'Oro) and millionaire MGSW Alternation (Distorted Humor).

Book-ended by 'TDN Rising Stars', this is one of those vintage allowances you'll only find at Saratoga that could easily have a grade next to it. Shadwell Stable's wide-drawn Mahaamel (Into Mischief) gets a tepid nod on David Aragona's morning line at 5-2. He was a close second on debut at Belmont Apr. 24 to fellow 'Rising Star' and recent GIII Dwyer S. hero First Captain (Curlin), and broke through himself by 3 1/4 lengths going this trip in the Belmont mud June 4. The $700,000 KEESEP yearling, out GSW Hot Stones (Bustin Stones), earned a 99 Beyer Speed Figure for his maiden breaker.

Stonestreet homebred Beau Liam (Liam's Map) will have to work out a trip from the rail in just his second attempt. The son of GSW Belle of Perintown (Dehere) is half to GSW Strike It Rich (Unbridled's Song) and MSW/MGSP Tomlin (Distorted Humor). He aired by 7 1/2 lengths and received a 94 Beyer for his unveiling under the Twin Spires May 29.

Chad Brown has two signed on. Crowded Trade (More Than Ready) was beaten a nose in the GIII Gotham S. in March, third in the GII Wood Memorial S. Apr. 3 and fifth last out in the GI Preakness S. May 15. Witsel (Nyquist), meanwhile, was purchased privately by Peter Brant and Bob LaPenta after a 13 1/4-length romp as a late season 2-year-old at Tampa Dec. 9 for trainer Carlos Munoz. He earned a solid 84 Beyer for that outing, but the subsequent efforts by the field he beat that day have been hit or miss. The fourth finisher did take a state-bred stakes, however, after breaking his maiden for $25,000. Witsel was a $72,000 KEESEP RNA and is a grandson of Grade II-winning sprinter Golden Gale (Summer Squall).