Racing a New-Found Passion For Bartram-Bell 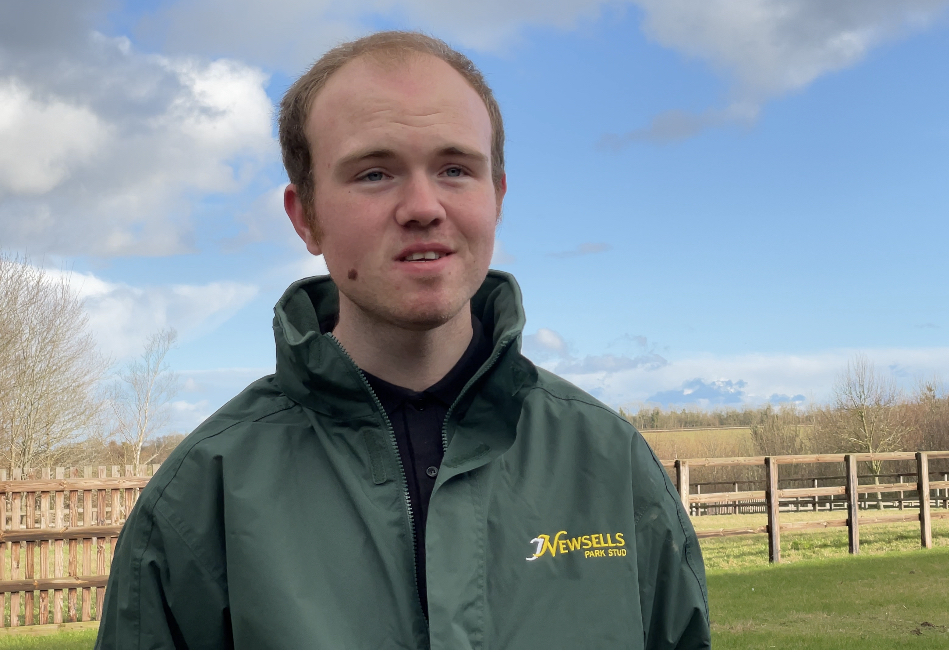 If you gathered a group of industry people together and asked them how they got involved in racing and breeding the answers would vary. Some may say they were bred into it much like the horses they care for, others may have started horse-riding from a young age and some may have had their imaginations captured during a day at the races. For Callum Bartram-Bell it was the latter that ignited a dormant passion.

“I'm from South Lincolnshire and I never really had any interest in horses or had considered this as a career option until I was rejected by the Civil Service Fast Stream course in October 2019,” says Bartram-Bell. “Before that it was always my older cousins who would go horse-riding and I would always be at home with my grandad, who was a self-employed carpenter, or knocking on doors campaigning for issues I believed in. I went to my first race meeting when I was 15 and loved the atmosphere at the racecourse, seeing the horses in the pre-parade ring and trying to pick a winner. I went on to become involved in the syndicate for Pentland Hills (Ire) with the Owners Group. I remember rushing home from university to watch him win the Triumph Hurdle in 2019.”

Having studied politics at university and wanting to pursue a career in that field, Bartram-Bell applied for the civil service but sadly that application was not successful. What is politics' loss is the breeding industry's gain as Bartram-Bell decided to push himself out of his comfort zone and apply for the Entry to Stud Employment (E2SE) course at the National Stud.

“The E2SE course is sponsored by the Racing Foundation and the TBA,” explains Bartram-Bell. “It's residential at The National Stud where you learn all basic horse-handling and basic horse health. Then from that you go on to a seasonal placement and I had the honour of coming to Newsells Park Stud. That's where I've been ever since.”

Bartram-Bell has progressed from having next to no day-to-day horse experience to forming part of the prestigious sales team at Newsells Park Stud, whose consignment regularly tops the Tattersalls October Yearling Sales and December Sales. In December 2021, Bartram-Bell took his first horse through the sale ring, Crimson Rock, from the partial dispersal for Al Shahania Stud, leading the mare out for 450,000gns. He was greeted to a round of applause from his Newsells Park cohort who were waiting for him as he left the ring.

“Crimson Rock was a dream of a horse to work with,”he says. “She was so special, a little sweetheart. Taking her to the sales she was exactly like what she was like at home. I remember looking up at the screen to see what she was making as we went along and it was just incredible, it was a great experience to be able to take her to the ring and be around her.”

Now working in the yearling barn with horses who may light up the Tattersalls bid board in months to come, Bartram-Bell is very appreciative of the time the Newsells Park Stud team have invested in his development.

“The stud is amazing,” says Bartram-Bell. “It's an honour and privilege to work with the team here, to learn from them. The passion they have for the horses is second to none and the horses, the pedigrees speak for themselves.”

With his new-found passion Bartram-Bell is keen to combine his university degree with promoting the breeding industry.

“I see my life now combining politics with the horse racing industry, I want to make use of my £60,000 debt and my piece of paper,” he says. “I might get into the international relations of horseracing or promoting British racing and increase the recognition of stud farms here in Britain. I'd also like to help with getting the sport more of a following in this country, trying to get it to beat football as the number one sport. I think as well I'd probably like to get more people to come into the industry and to have amazing experiences like I have had.”

Although not initially the plan, the breeding industry has become a major part of life for Bartram-Bell with his future aspirations highlighting his dedication to bettering the sport. He is now part of that group of people who can share their story of how they started in the industry, with his being testament to the welcome and support you can receive if only you have the interest.