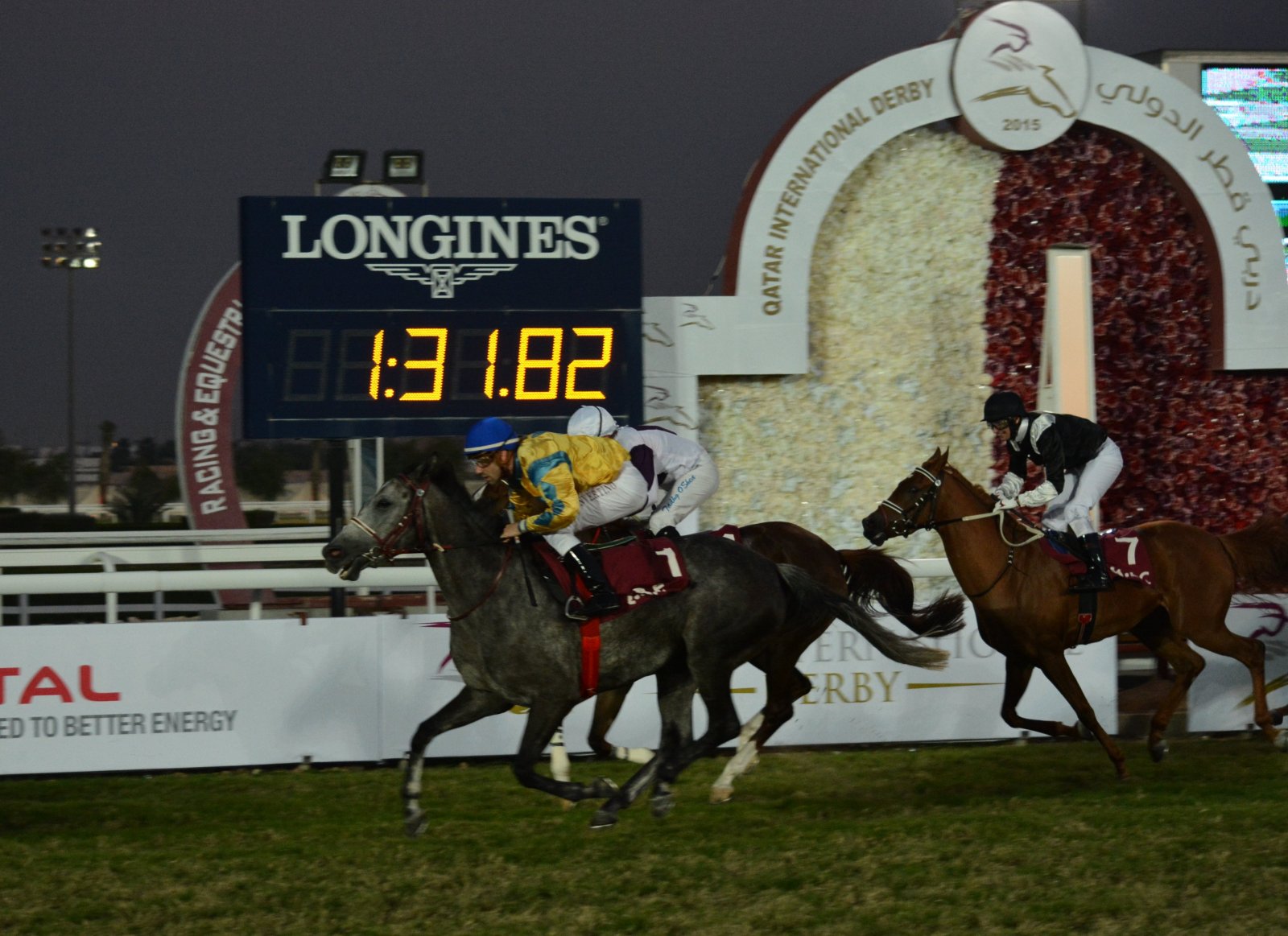 The familiar voice of former Churchill Downs announcer Mark Johnson welcomed the compact, but enthusiastic crowd on hand for the first card of the two-day Qatar International Derby Festival as the sun began to set on a delightful Tuesday evening at Al Rayyan Racecourse.

A pulsating blanket finish in the opener over grass for Arabian maidens followed shortly thereafter by highly entertaining rapid fire heats on the dirt course. Now this is fun.

Although failing to threaten the 1,400 seating capacity in the grandstand (maybe about 2/3 full at its peak would be generous), those in attendance did really seem to be having a great time. No gambling or alcohol at a racetrack? Clearly not an issue for the Qataris.

While a line began to form to obtain entry cards for a contest to win a car, small children enjoyed pony rides in a nearby section in the very family friendly facility. Similar to Keeneland, but much farther apart, there are separate saddling and parade rings, with the latter located directly in front of the stands.

Jockey Frankie Dettori drew plenty of attention (a television cameraman couldn't have been more than three feet from his face as he twirled his riding crop), nothing new there, upon entering the paddock before the featured US$100,000 Al Rayyan S. (N). for 2-year-old Thoroughbreds going seven furlongs. But it was another horse with European connections that stole the show beneath the lights.

Sibbertoft Bloodstock Limited's Perkunas (Ire) (Baltic King {GB}), trained by Brian Meehan, unleashed a powerful stretch run down the center of the course under a flawless ride by Jamie Spencer to win going away by two lengths. The wall-to-wall smile of his female handler, one of very few not wearing a helmet, may still not of worn off yet.

“I'm delighted; it's a lot of pleasure bringing a 2-year-old out here,” Meehan commented before accepting the hardware. “It was really great. I love taking horses abroad–trying to win with them in the States, too, and so on. It was just another challenge, really, for the yard and the team at home. It's a real pleasure when you take them abroad and win. Especially races like this. They looked like a nice bunch of horses going out onto the track. I was really impressed. He's a late-maturing type and clearly improving.”

Meehan became the first European-based conditioner to saddle a winner in Qatar.

“It's a wonderful atmosphere here this evening,” he concluded.

Nasser Al Kaabi, general manager of the Qatar Racing and Equestrian Club, added, “I am delighted that a European horse has won the Al Rayyan S. and become the first European winner in Qatar as well.”