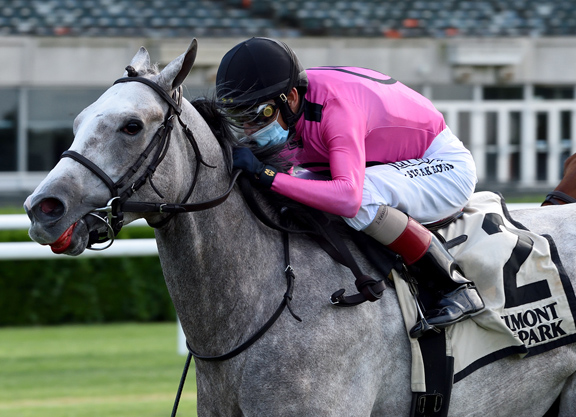 Seven sophomore turf sprinters and one entered only in the event the race comes off the main track are set to contest Friday's GIII Quick Call S. at Saratoga, but it looks all over a two-horse test.

Jack and Noah (Fr) (Bated Breath {GB}) is the even-money favorite on the morning line and with good reason. A €47,000 Arqana August yearling turned €160,000 Arqana May juvenile purchase by Justin Casse, the gray colt won the six-furlong Atlantic Beach S. at Aqueduct last November, but failed to stay a when sixth at 9-5 in the Texas Turf Mile at Sam Houston in January. Since being cut back to one turn, Jack and Noah ran last year's GII Breeders' Cup Juvenile Turf Sprint runner-up Chimney Rock (Artie Schiller) to a head in Churchill allowance company May 17 before wiring the field in the June 19 Sir Cat S. at Belmont, stopping the clock in a slick 1:07.05.

Turned Aside (American Pharoah), seventh in the aforementioned Atlantic Beach S., bested Wednesday allowance winner Maxfield Esquire (Discreet Cat) in a November allowance at the Big A and did the chasing in the Sir Cat, going down by a length.

Jack and Noah is joined in the Quick Call field by stablemate Old Chestnut (Speightstown). The front-running winner of the Ontario Racing S. at Woodbine last September, the Live Oak homebred son of GISW Pool Land (Silver Deputy) snapped a streak of four off-the-board finishes with a third-place effort in the Sir Cat.