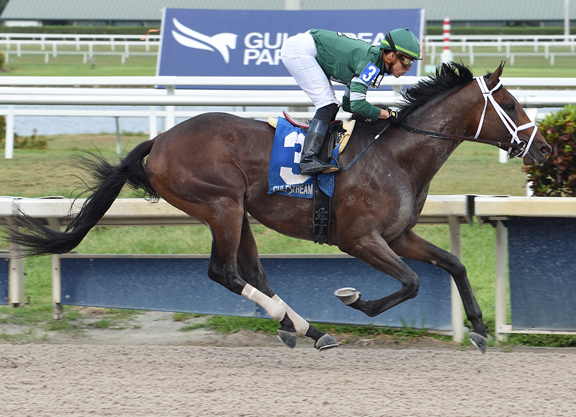 St Elias Stable’s lightly raced Dr Post (Quality Road) stamped himself as a sophomore to watch Saturday after securing a first stakes score despite tough trip in Gulfstream’s Unbridled S. Fourth at 1-2 odds at Belmont way back in July of 2019 behind subsequent GSW/GISP Green Light Go (Hard Spun) and SW/GSP Another Miracle (American Pharoah), the $400,000 Keeneland September yearling resurfaced to score here Mar. 29 while earning a strong Beyer Speed Figure of 94. He was backed down to even-money favoritism this time over GIII Gotham S. third Attachment Rate (Hard Spun), and asserted his superiority over that rival despite some race riding by that one’s pilot. Away alertly to chase between foes into the first turn, the Todd Pletcher pupil soon found himself in a bit tight and was shuffled back entering the backside with only Attachment Rate behind him. He was scrubbed along down the backside to keep pace after Attachment Rate joined him three deep with another foe at the fence. Steadied into the home bend after a :47.47 half, Dr Post seemed to be going up and down as Irad Ortiz, Jr. implored him for more, but he continued to grind away three deep into the lane as Luis Saez on Attachment Rate to his outside kept them pinned in. Pacesetting Americanus (War Front) drifted out slightly while bracing for a challenge from the two chalks in upper stretch, but Dr Post leveled off late and glided away from a green Attachment Rate by 1 1/2 lengths. Americanus held third.

“He got through between horses and when he finally got through he just took off,” Ortiz said. “He’s still such a young horse. I think when he grows up a little bit in his mind, it will help him a little bit more. But he did everything right. I can’t complain.”
Pletcher added, “I was concerned that we were going from a seven-furlong maiden to a solid field of experienced racehorses. I was concerned that I was throwing too much at him in just his second start of the year. But he trained so impressively–his last two breezes were so good. We had the option of taking him to Oaklawn for an allowance race, but I said, ‘we’re here and the horse is doing well, let’s take a calculated risk.’ I thought for a lightly horse to respond that way and overcome some traffic, it was impressive. He got the win and got a good education. He showed a lot of talent and backed it up again today.”

Of what might be next, he said, “Like everyone else, we’ll wait and see what options we have. Hopefully, we’ll find out some news from New York when they’re thinking about reopening hopefully this week. By the time he’s ready to run we’ll have a better idea what our options are, but I was very, very encouraged by that.”

Dr Post is the 42nd stakes winner for his sire, and is bred on the same cross as GISW Hootenanny. His dam took the 2007 GII Vinery Madison S. over the Keeneland Polytrack. Dr Post’s now 2-year-old half-sister by Super Saver was just a $3,500 KEESEP yearling and he has a yearling half-sister by Quality Road’s GISW son Klimt.