QEII Glory For Dubawi's The Revenant 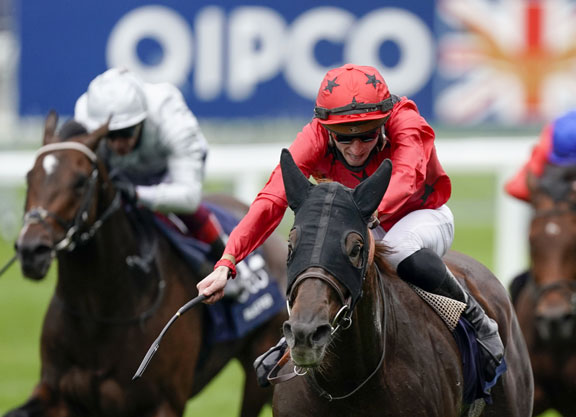 On a day when only the fittest survived, the suitably dramatically-titled The Revenant (GB) (Dubawi {Ire}) as expected made light of Ascot's very testing ground to take the G1 Queen Elizabeth II S. for France. Like the G1 QIPCO Champion S. hero Addeybb (Ire) (Pivotal {GB}) runner-up in his respective race 12 months ago, Al Asayl France's chestnut had a proven love of these conditions in his armoury as well as freshness having only re-appeared this season a fortnight previously when winning the G2 Prix Daniel Wildenstein at ParisLongchamp. Sent off the 5-1 second favourite to go one better than in 2019, he was always in his comfort zone tracking the moderate early pace set by the 28-1 shot Roseman (Ire) (Kingman {GB}). Tackling that outsider inside the final two furlongs, he had edged ahead a furlong from home and answered Pierre-Charles Boudot's every call to gain a head verdict, with 3 1/4 lengths back to the 8-11 favourite Palace Pier (GB) (Kingman {GB}) in third. “Today I was very confident and he did it well on the track,” commented France's revelation 'PCB'. “He was very relaxed and when I asked him he gave me a nice, long turn of foot and was courageous. He's a super-tough horse.”

This was the one race on the card that played host to a potential superstar in the unbeaten Palace Pier and although he performed with credit on going that played against him, he was another in a line of John Gosden stars who failed to show their true colours in specialist ground. He made his move down the outer from rear under Dettori to threaten The Revenant, but was unable to keep tabs on the 5-year-old who had only the leader Roseman to worry about late on. Nothing got into contention from behind and it was ultimately left to The Revenant to make it a clean sweep for geldings in the day's feature races open to them.

Trainer Francis Henri Graffard, whose 2020 has been highly profitable thanks to this stable stalwart, the filly Watch Me (Fr) (Olympic Glory {Ire}), sprinter Wooded (Ire) (Wootton Bassett {GB}) and 3-year-old middle-distance performer In Swoop (Ire) (Adlerflug {Ger}), deserves all the credit available in nurturing the former Hugo Palmer trainee as Haggas has with Addeybb. Three-from-four as a 3-year-old, he was gelded and returned to reward that decision by annexing Saint-Cloud's Listed Prix Altipan and G3 Prix Edmond Blanc last Spring. Brought here after subsequent wins in the G2 Badener Meile and last year's renewal of the Daniel Wildenstein, he found only King of Change (GB) (Farhh {GB}) too strong here and his subsequent absence until Arc Saturday was due to COVID-19 wiping out the early part of the calendar.

“I had him ready to run in the Spring, but when lockdown came I decided to send him out to grass and he had a good spell,” Graffard explained. “I had to wait until the Daniel Wildenstein for his comeback and he was only 80 per-cent fit for that race. I was a little bit stressed that I had to work him quite hard in the run-up, but everything was building to today. It all worked out because he is a very good horse with a lot of heart. It went exactly as we had planned, with him settled close to the pace.”

Gosden said of Palace Pier, “He pulled off a shoe leaving the gate. He was trying to run the whole race with one shoe off and Frankie said he was not able to change leads and the horse wasn't able to handle the ground.”

The Revenant is the second foal out of Hazel Lavery (Ire) (Excellent Art {GB}), whose career sign-off came with a defeat of the eventual G1 Champion S. hero Noble Mission (GB) (Galileo {Ire}) on heavy ground in the G3 St Simon S. A half-sister to the Listed Premio Terme di Merano winner and G3 St Leger Italiano and G3 Give Thanks S. runner-up Leo Gali (Ire) (Galileo {Ire}), she is a granddaughter of Rapid Repeat (Ire) (Exactly Sharp) who is kin to the G3 Derrinstown Stud Derby Trial S.-winning sire Artema (Ire) (Common Grounds {GB}) and the stakes winner Hello Soso (Ire) (Alzao) who was also third in the GII Diana H. Hazel Lavery's unraced 2-year-old filly by Oasis Dream (GB) is named La Viette (GB), while her 2020 foal is a daughter of Saxon Warrior (Jpn).