Pur-Sang: Much More Than a Comic Book 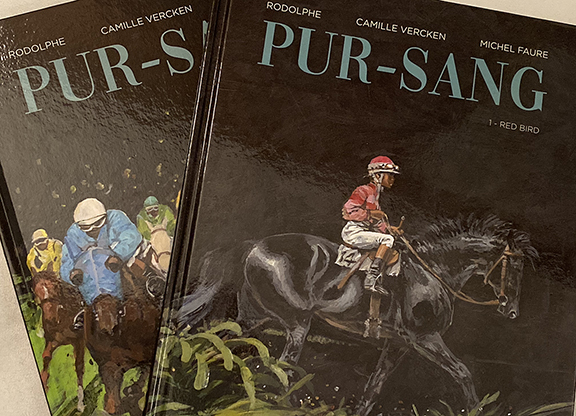 The first two books in the Pur-Sang series

Comic books are presumably for children, but they have long served as a viable conduit for social commentary. From superheroes fighting Nazis to battles between good and evil, comic books provide authors a powerful way to reach a young audience with a social message.

So while “Pur-Sang,” (“Thoroughbred”) a new hard-cover comic book series from the team of Camille Vercken, Rodolphe and Michel Faure appears at first glance to be a story of girl-loves-horse, girl-saves-horse, they are so much more.

Perhaps most importantly right now for the racing industry, they spread a positive message about how we love the horses we breed, raise and race, and what heroes those horses are.
The books are available at the Arqana boutique across from the welcome bureau this week, and if you’re looking for a special Christmas present for a French-speaking friend or relative, I cannot recommend them highly enough.

The first in the series, Red Bird, is inspired by the story of Ipi Tombe, the champion mare from Zimbabwe. Ipi Tombe was bred by Peter Moor, chairman of the board of directors of the Thoroughbred Breeders Association of Zimbabwe. In the turmoil at the end of the 1990s when Robert Mugabe ruled the country and the government’s land reform law mandated confiscation and redistribution of horse farms in Zimbabwe, she was sold for the U.S. equivalent of $30 at auction. She went on to win over $1.5 million, and was South Africa’s champion 3-year-old filly and Dubai’s Horse of the Year.

In Vercken’s story, adapted by Rodolphe for this format, her name is Red Bird, and she is born on a farm in the West of Zimbabwe owned by a white family. With the country in political turmoil, and their lands and farm threatened by the reform law, the family considers selling all their stock. But their 12-year-old daughter Claire persuades them to keep Red Bird, with whom she has fallen in love. She breaks and trains him along with Georges, a Zimbabwe native child they find living among a herd of zebras, who has an instinctive way with horses.

Vercken is the former head of the French breeders association, and is the owner of the equine biosecurity company Equiways. She serves as a consultant for Haras de Vieux Pont, runs a pinhooking syndicate, Cheval Invest, and is raising three young children.

So where did she find time to write as well?

“I was getting awfully bored reading stories to my kids before going to bed,” explained Vercken of her initial interest in writing the books. “I fell asleep before them. At that time, I also volunteered to visit kids in the hospital in Paris. And I remember the only thing that was able to take their attention away from the TV were stories about horses. I started then to tell them about legendary horses we all know–Seabiscuit, Secretariat-and they were captivated. They kept asking for more. It would bring them to another dimension, another galaxy.”

Vercken sees the books as a way not only to entertain children, but as a way to promote a positive industry message. “For me,” she said, “our industry has wonderful stories to tell, and moreover they are true stories, featuring everyday heroes. I started to write stories about famous horses that existed, stories that bring good values for young kids, like bravery, perseverance, and altruism. Also for us, imagine, we raise Thoroughbreds in the US, England, Ireland, France, in velvet. Whereas, in Zimbabwe, at the time, they raised racehorses around wildlife. But we all have the passion for racing in common. I wanted to share the common love for our sport and breeding. And to tell the tragic destiny of those Thoroughbred breeders at that time.”

Their book is beautifully illustrated by Michel Faure, a legend in France, and the illustrator of Walter Farley’s Black Stallion stories.

“Michel has an expert eye for what a horse looks like,” said Vercken. “He never makes any mistake in terms of conformation. That’s what I wanted. We are all purists in the Thoroughbred world, and I didn’t want the featured horse to look like a Standardbred or a Western horse. It must look like a Thoroughbred.”

Vercken got her stories in front of Faure, who read them, and said yes. He suggested that she transform them from children stories to comic books, and brought Rodolphe on to do the scenarios. “It is much easier to knock on publishers’ doors,” said Vercken, “if Michel Faure is standing next to you.”

The books are published by France’s leading comic-book publisher, Glénat, and in addition to being on sale at Arqana, are also available on Amazon.

If you don’t speak French, it would be advisable to take a swing at persuading Vercken-who lived in Lexington for several years–to translate them into English. Or go out and get yourself into some French classes and read them. They’re that good.