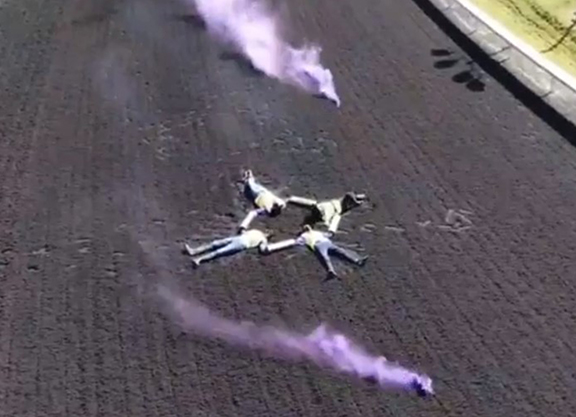 The Thursday racing card at Golden Gate Fields was on hold after animal rights protesters ran on to the track before the first race and locked themselves together with interlocking pipes over their arms. The first race was scheduled to go off at 12:45 p.m. Pacific Time. As of 4:45 p.m. local time, one hour after the last race was scheduled to go off, no races had been held and the protestors remained on the track.

The protest was staged by a group called Direct Action Everywhere, which live-streamed the goings-on on their Facebook site, including drone footage of the protestors lying on the track, before signing off just after 4 p.m. PT. The group is based in the Bay Area.

According to Cassie King, a spokesperson for the group, the four individuals were locked together to form a human blockade. They were connected by heavily weighted pipes, according to a press release from the organization.

The protestors ran onto the track at about noon, climbing what Direct Action Everywhere said was a 7 1/2-foot fence and lying on the track on the far turn. On video shown from drone cameras, the four activists waited until the harrows had passed before the first race before scaling the chain link fence, carrying the interlocking pipes. After they lay down on the track, they attached themselves to one another with the pipes. On the video, one of the harrow drivers ran up to them and tried to stop them from locking arms, but was unable to do so.

“Their goal is to be there long enough so that they can't race today,” King said. “The first race was scheduled to go off at 12:45 and that obviously hasn't happened because they haven't moved them yet. Our bigger goal, which we are trying to get support behind, is to shut down Golden Gate Fields permanently.”

At about 1:20 p.m., police officers or security personnel were on the track hovering over the protestors but didn't seem prepared to take any immediate action.

“The activists in this blockade are prepared to be arrested,” King said.

Direct Action Everywhere describes itself as “a global network of activists working to achieve animal liberation in one generation.” Their website says that their 'accomplishments' to that end are rescuing hundreds of animals from slaughterhouses, laboratories and other places of violence, mobilizing thousands to take action in hundreds of cities worldwide, and passing legislation such as the fur ban in Berkeley and San Francisco that led to California banning it statewide. Their website says they have 30 chapters across the U.S. and Canada.

The group's goal, she added, was to end horse racing in the U.S. King and the other hosts of the live Facebook feed also said that they were advocating for the land at Golden Gate be repurposed as affordable housing.

King was clearly misinformed about what makes up a racing card as she repeatedly said that only two races were scheduled on the day and that the second one was set to go off at about three hours after the first. She also said that half of all Thoroughbreds bred for racing went to slaughter, also not true.

King said the group decided to take action because, she said, three horses had died there over a recent four-day period and that five had died during the current meet.

A small group of protestors gathered outside the track with banners and signs reading, “Shut Down Golden Gate Fields.” The group was also circulating a petition online to shut the track down. Some passers-by threw eggs at the group, according to the activists.

“This is obviously not just because of those four horses or five horses this season. It's the entire industry,” she said.

Golden Gate was meant to function as a COVID vaccination site today, where people were reportedly going to show up to receive their second dose of the vaccine. The site was temporarily closed due to the protests, but was opened again around 2:30 p.m. A local health site estimated the number of canceled vaccination appointments at 200.

Golden Gate Fields addressed the action over Twitter, tweeting, “Golden Gate Fields is a firm believer in the right to protest. However, the current actions of the protesters have forced the closure of the onsite COVID vaccination clinic, and hundreds of people have already had their vaccinations cancelled.

“We respectfully suggest to the activists that there is a better way to have this conversation and air their concerns. We welcome the opportunity to have this discussion in the appropriate format.”

Later in the afternoon, a portable pop-up shade tent was put up over the protestors, presumably as a goodwill gesture from Golden Gate.