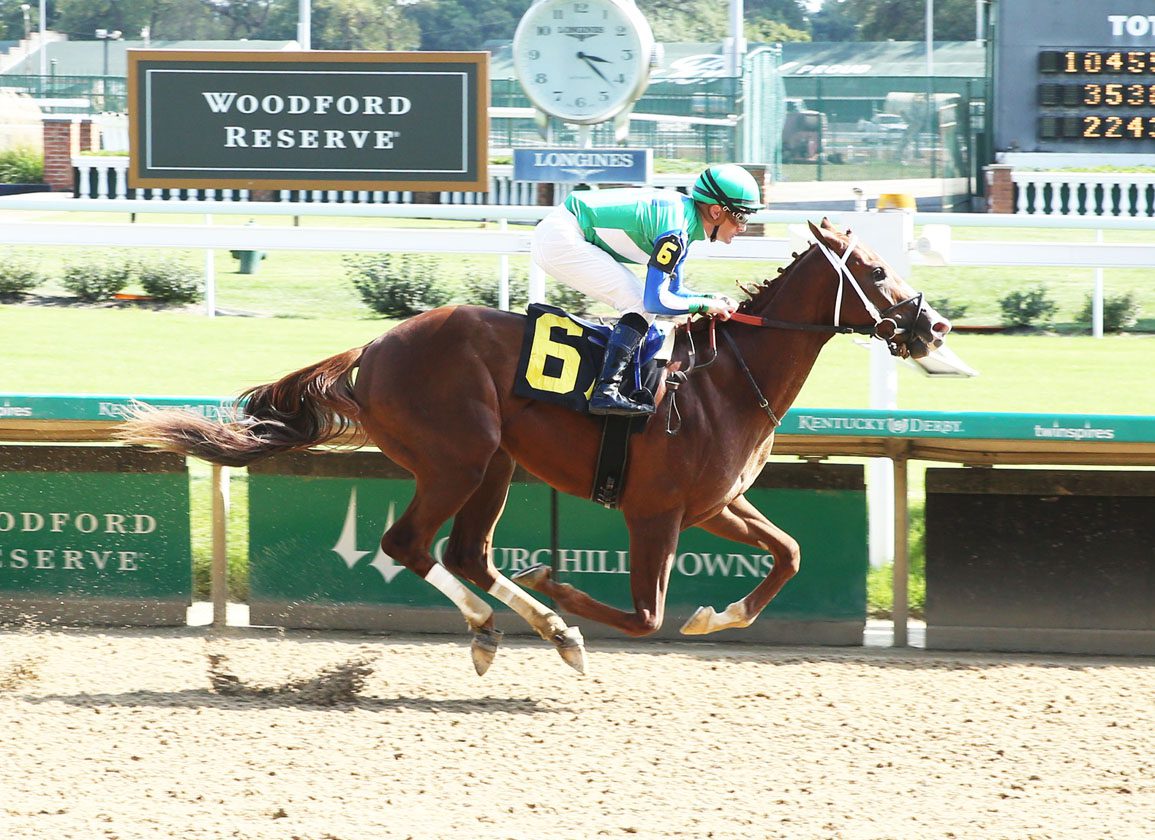 6th-Churchill Downs, $123,375, Msw, 9-21, 2yo, 6f, 1:09.93, ft, 1 3/4 lengths.
PROTEGE (c, 2, Good Magic–Taboo, by Forestry) became the 11th winner for his in-form first-crop sire (by Curlin) with a good-looking victory beneath the Twin Spires Wednesday. The $80,000 Fasig-Tipton Midlantic breezer (see below) was sent off at odds of 10.55-1 and jumped about midfield before working his way forward to sit third, just off dueling pacesetters. Warming up to the task three wide approaching the stretch, the Apr. 25 foal claimed pace-pressing Lugan Knight (Goldencents) with a furlong and a half to race and edged away to post a 1 3/4-length victory. John Moores and Charles Noell's Merriebelle Stable acquired Taboo–a daughter of GISW Dream of Summer (Siberian Summer) and therefore a half-sister to GISWs Creative Cause (Giant's Causeway) and Vexatious (Giant's Causeway); MGSW & GISP Destin (Giant's Causeway); and Summer Promise (Uncle Mo), recent runner-up in the GIII Schuylerville S. at Saratoga–for $125,000 in foal to Orb at the 2015 Keeneland November Sale. The in-utero foal would become the filly Der Lu (Orb), GSP, $165,800, herself a $900,000 Fasig-Tipton Florida juvenile purchase who was a debut winner at Del Mar in 2016 (83 Beyer) and missed by a nose in the GIII La Canada S. the following season. Taboo is the dam of an Audible filly that was knocked down to Mandy Pope's Whisper Hill Farm for $300,000 during the opening session at Keeneland September, a filly foal by McKinzie and was most recently covered by Tiz the Law. Among Good Magic's winners are GII Sorrento S. victress Vegas Magic, GIII Iroquois S. upsetter Curly Jack and 'TDN Rising Star' Blazing Sevens, runner-up in the GI Runhappy Hopeful S. Sales history: $140,000 RNA Ylg '21 KEESEP; $80,000 2yo '22 EASMAY. Lifetime Record: 1-1-0-0, $69,000. Click for the Equibase.com chart or VIDEO, sponsored by TVG.
O-Harry T Rosenblum; B-Merriebelle Stable LLC (KY); T-Ron Moquett.