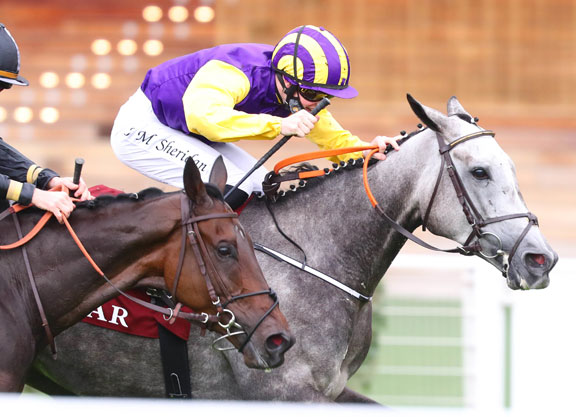 Princess Zoe was second on her first start for Mullins at Navan last June before winning five straight. She earned her first black-type victory under Joey Sheridan in Galway's mile and a half Listed Oyster S. before stepping up to 2 1/2 miles for success in ParisLongchamp's G1 Prix du Cadran. The grey rounded out her season with a fourth in the G1 Prix Royal-Oak.

Mullins made it no secret in the interim that his key goal for Princess Zoe in 2021 is the G1 Prix de l'Arc de Triomphe, but he said on Friday that for now he is focusing on the first half of the year.

“The plan is to get two runs into her in April while there's a cut in the ground, and then we'll plan the rest of the season after that,” he said. “I'm keen to go back over a mile and a half with her. People have it in their heads that she's a dour stayer, but from the work I'm seeing, I think she'll be as effective or if not more over that trip. She's won over a mile and a half twice at Galway. Slow horses tend not to be able to do that.”

Princess Zoe's form was franked last weekend when Subjectivist, who she finished adrift of in the Prix Royal-Oak, emphatically won the G2 Dubai Gold Cup.

“Subjectivist was impressive in Dubai, and I thought her run behind him was equally as good as her first in my opinion,” Mullins said. “She'd had two trips to France–I thought that was very good. Hopefully she's as good this year. If she is, the world is our oyster.”

“Her work seems to be as good,” Mullins added. “She wouldn't be 100%, but we're not far off it. She's a strange filly, because she loves hard work. We gave her a break after Longchamp, but she was very unhappy, and we had to put her back in light training all winter because she was very upset. She's not like us, craving a break–she loves her work. So while she's fit, she might not just be as razor-sharp as she would be after a run or two.

As for what could come after Princess Zoe sharpens up, Mullins said, “We've half an idea of running at Royal Ascot–then after that, I can't see her running again until September. We have put her in the [G2] Yorkshire Cup, but we have a plan to go to the [G3] Vintage Crop at Navan at the end of April–if it came up firm we have the York option.

“It might mean meeting Stradivarius at York, but I can say if we can't beat him then we haven't got an Arc filly–we're thinking big.”

Returning to the immediacy of Saturday's race, Mullins said, “There are no easy races in Ireland now–they are so competitive. Having had a quick look, I thought Jessie Harrington's [Flor De La Luna] and Ger Lyons's [Yaxeni] would be the biggest dangers–but if we under-perform there would be others.”