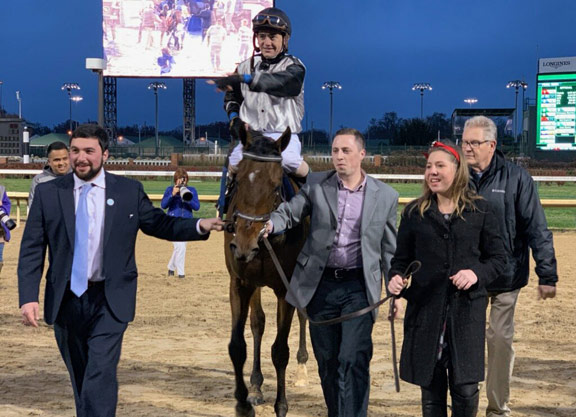 At the opening session of the Keeneland January Sale Monday, Princess Warrior (Midshipman) (Hip 13) will bring the Trommer family together one last time as they gather in Lexington to see their stable star go off to her new home as a broodmare.

“My parents live in Florida and my brother lives in Tennessee, so they will be here,” said Lexington resident Drew Trommer, who owns the mare in partnership with his dad, Evan, and brother, Matthew. “We will be rooting for her to go to a good home and hoping she stays here in Lexington, so we can go visit her because she has definitely been a big part of our family. We are sad to see her go, but we are excited about her future.”

Evan Trommer had been in racing since before his kids were born, but the family had taken a brief hiatus from racehorse ownership before deciding it was time to return to the game they loved. That is when they purchased Princess Warrior for $60,000 at the 2017 Fasig-Tipton Midlantic 2-year-old Sale.

“I have been going to the track since I was an itty bitty baby,” Drew Trommer said. “One of the first pictures I was in outside of the hospital was in the winner's circle at Golden Gate with a horse named Grandma's House. I was literally born into the sport. I have followed it very intently.”

The 27-year-old, who works as a Key Accounts Manager for TVG, continued, “We used to run under Wind River Stables for many years. We were blessed to have Black Seventeen, who won the [GI] Vosburgh and ran in the Breeders' Cup. There was a point where we thought he was the best we would ever have, then Princess Warrior came and proved us wrong.”

Princess Warrior took the Trommer family on the ride of their lives, kicking off her career with a debut win at Churchill Downs in 2017 over future Grade I winner Mia Mischief (Into Mischief). She followed that with a second in Keeneland's GI Darley Alcibiades S. and ran in that year's GI Breeders' Cup Juvenile Fillies. The highlight of her career was a victory in the GII Mrs. Revere S. at Churchill Downs in November of 2018. The now-5-year-old won four of her 19 races, hitting the board five additional times and earning $456,664 for trainer Ken McPeek.

“She is probably the best we have ever had,” Trommer said. “She was a fantastic runner. She started her career with that win against Mia Mischief, who ended up being a freak. We were able to take her to Del Mar and run in the Breeders' Cup and getting that win at Churchill Downs in late 2018 was a huge highlight.”

While Princess Warrior provided the Trommer family with plenty of highs, she also showed them one of the industry's biggest lows when suffering an injury during what would be her final race at Churchill Downs May 10. The bay fractured both sesamoids in her front left leg. The Trommers did not hesitate to save their star runner, sending her straight to Dr. Larry Bramlage at Rood and Riddle, who performed surgery to repair the leg.

“She has been a great filly for us and we wanted to do whatever we could to help her, whatever was best for her,” Trommer said. “She spent most of her recovery time at Kenny [McPeek]'s farm and they took great care of her there. It is just amazing to see how far she has come. She is running and bucking around the pastures now. She almost looks like a mustang at a rodeo at times. She is just full of energy. She looks great. She looks like she is at a great weight. She looks like she did when she was racing and she seems as happy as can be.”

After everything they had been through with the aptly named Princess Warrior, the Trommer family had a tough time coming to the decision to enter her as a broodmare prospect in Keeneland January, where she sells as part of the Taylor Made consignment.

“It has been a debate in our family for a while now as to what we wanted to do,” Drew Trommer said. “Ultimately, it came down to the fact that we don't have a breeding operation. We never have. We feel, by putting her in the sale, she can go to a home where they can take great care of her and she can become a great broodmare. We know her foals are going to be fantastic and that is what makes it difficult. We kind of want to keep her foals for ourselves, but we really don't have the operation to do that right now, so that is why we felt it would be better to put her in the sale.”

Princess Warrior probably could have made the November Sales, but the family felt January would be a better fit for their beloved mare.

“The November sale was obviously fantastic this year with tons of big names in there,” Trommer said. “We thought she would be a star in there, but that she would be one of the top five in this January Sale. We thought it would be a good target, as well as giving her a chance to make sure she is fully recovered.”

Once Princess Warrior sells Monday, the Trommers will be down to just one horse, but they are looking to expand on that soon.

“We currently have two horses, including Princess Warrior,” Trommer said. “We are looking to expand down the road. Horse racing is a huge passion for all of us. We always want to have skin in the game and as many runners as we can. Hopefully they are all like Princess Warrior.”

While the Trommers are doing the right thing by sending Princess Warrior on to the next stage of her career, Monday's sale will be bittersweet for them as they say goodbye to a member of their family.

“Owning her has been awesome for our family,” Drew Trommer said. “Watching her run has been really fun. We all tried to get out to all of her races. While she was at Kenny's farm, we visited her all the time. She loves peppermints, so we brought her plenty of those. She brought us all together and allowed us to have some really neat experiences, especially the Breeders' Cup. She has definitely been a big part of our family and we love her to death.”