Preparing For The Flood 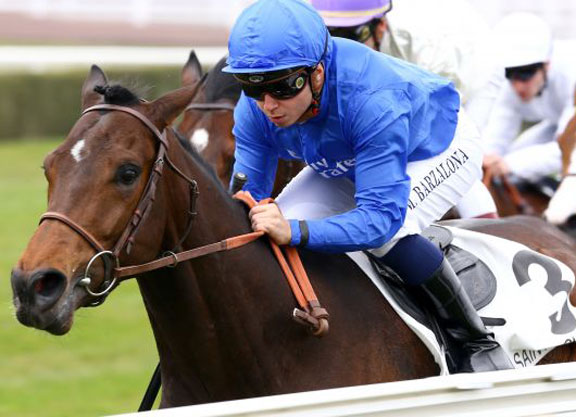 After the success of Cloth of Stars (Ire) (Sea the Stars {Ire}) in Sunday's G2 Prix Greffulhe, Godolphin and Andre Fabre could be in line for more success at Chantilly on Tuesday as Floodlight (Medaglia d'Oro) takes in the G3 Prix de Guiche. Making all and comfortably on top at the end of Saint-Cloud's Prix Verso II over a mile Mar. 24, the homebred son of the dual grade 1 winner Flashing (A.P. Indy) meets only three opponents as he moves towards the G1 Prix du Jockey Club here June 5. “Floodlight is in good form and this is a step-up to the next level in a fairly small field,” the owners' Lisa-Jane Graffard said. “We don't want to see too much rain, as he has a good action and prefers better ground.” Chief threat appears to be Ecurie Antonio Caro and Gerard Augustin-Normand's Almanzor (Fr) (Wootton Bassett {GB}), the impressive winner of Bordeaux-le-Bouscat's Listed Grand Criterium de Bordeaux over a mile in October who was subsequently seventh for the G1 Criterium International at Saint-Cloud the following month. Back with a third in the G3 Prix de Fontainebleau staying at a mile here Apr. 20, the bay looked in need of a step up in trip and hails from the Jean-Claude Rouget stable looking for a sixth renewal and third in the last four years. “He ran third at Chantilly, which was not a bad performance,” his trainer told At the Races. “He never ran his race in the Criterium International. The ground was far too heavy that day and I regret that he ran that day. I had the same misadventure with Le Havre in that race. Anyway, I'm not sure yet if he is a miler or if he is a mile-and-a-quarter horse. He has entries in the [G1] St James's Palace Stakes [at Royal Ascot June 14] and in the Prix du Jockey Club. But he definitely wants better ground.