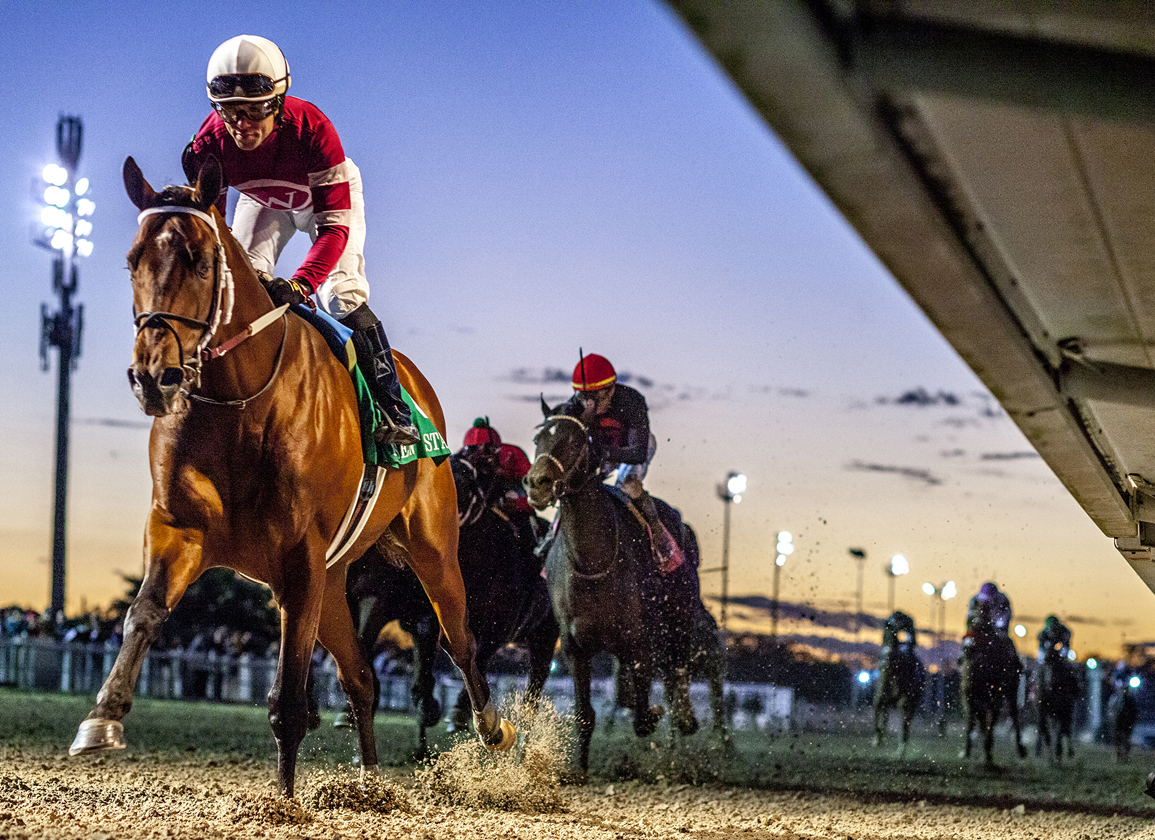 BALTIMORE, MD–Every year, a new batch of sophomores converges upon Pimlico Race Course. And while the names of the contenders is ever changing, the people behind them are remain fairly consistent. Hall of Fame trainer D. Wayne Lukas casts a very long shadow in the second jewel in the Triple Crown, having won it on six prior occasions. From his first Preakness victory with Codex in 1980, Lukas has gone on to add wins with Tank's Prospect (1985), Tabasco Cat (1994), Timber Country (1995), Charismatic (1999) and Oxbow (2013).

One more win would put him on even terms with R. Wydham Walden and Bob Baffert, who each hold the record with seven Preakness titles. Coincidentally, Lukas's chance to tie Baffert with a record seventh win comes in the form of Secret Oath, a daughter of the late Arrogate, who was trained by Baffert. A homebred for Briland Farm, the chestnut is out of MSW and MGISP Absinthe Minded (Quiet American), who was also conditioned by Lukas. A winner of two of four starts at two, Secret Oath aired at Oaklawn in her first two starts at three, including the Feb. 26 GIII Honeybee S. before finishing a troubled-trip third in the GI Arkansas Derby Apr. 2.

“We didn't get a smooth trip, which we needed in a race of that caliber,” he said. “We also had some questionable decisions being made as the race unfolded. Those two things in combination probably cost her the race. I thought she was clearly the best horse in the race.”

Sent off at 4-1 in a salty renewal of the May 6 GI Kentucky Oaks that included champion juvenile filly Echo Zulu (Gun Runner) and GISW Nest (Curlin), Secret Oath drew off to win by a definitive two-length margin over Nest, with the champion back in fourth.

Lukas continued, “[The Arkansas Derby] didn't work out very well for us, but we had a five-week window [to the Oaks] and that just came together. Now, we're looking at a two-week window.”

“The Oaks was a tell-tale race for us,” said Lukas. “We never considered the Kentucky Derby when we ran against the colts in Arkansas, but we kind of had the Preakness on the radar.”

Following a similar approach to previous Preakness incursions, Lukas's three-horse contingent of Secret Oath and Ethereal Road (Quality Road) (and the barn pony Riff) arrived from the Churchill Downs base of operations following a 12-hour ride on a luxury equine transport.

However, despite the travel and activity since her arrival in Baltimore, the filly appears to have taken everything in stride.

“She's very professional,” affirmed Lukas. “She's gotten into a rhythm here with all the excitement and the media and it can be very disruptive to a horse, but she has handled that very well.”

“I think she's probably as good or maybe even a bit better than she was going into the Kentucky Oaks. I'd like to see her run the same race as she ran in the Oaks. Pick them off down the back side, be in contention at the top of the stretch and run right by them.”

Looking to stand in Lukas's way Saturday is Winchell Thoroughbreds' Epicenter (Not This Time), trained by Steve Asmussen. Adding an unexpected twist to the Triple Crown plot, the 4-1 Derby favorite was stymied by longshot winner Rick Strike (Keen Ice), who drew in off the also-eligible list following the scratch of Lukas's Ethereal Road on the eve of the race. And while the 11th-hour change up made for added drama and good press, it didn't really work out that well for Asmussen.

However, Asmussen proved philosophical about the Lukas scratch that ultimately dashed his Derby aspirations.

“Wayne is a very special person in racing,” said Asmussen, who is a two-time Preakness winner with Curlin in 2007 and Rachel Alexandra in 2009. “He's beyond iconic. Everything he has accomplished and continues to. It's a lot to go up against. He's inspirational.”

Victorious in last season's Gun Runner S., Epicenter finished runner-up in the Jan. 22 Lecomte S. at the Fair Grounds before bouncing back to score in the Feb. 19 GII Risen Star S. and GII Louisiana Derby Mar. 26.

Despite the last-out defeat, the colt's owner Ron Winchell remains upbeat about the colt's chances in the second jewel of the Triple Crown.

“I don't think the confidence level [in him has] changed, he ran a great race [in the Derby],” he said. “If he shows up and runs, we should be in great shape.”

Asked how he'd like to see things unfold Saturday, Winchell explained, “He's a very versatile horse. I anticipate we'll sit off the pace. I didn't think there is a different strategy. That's the nice thing about bringing a type of horse that has options. And he's got options.”

In contrast, when asked where he wants to see his charge in the race, Asmussen quipped, “In front at the wire. We handled everything else last time, how about we just worry about the wire.”

Representing the X-factor in this season's Preakness is Fern Circle Stables, Black Racing and Magdalena Racing's Creative Minister (Creative Cause). The grey, who was supplemented to the race for $150,000, is trained by Kenny McPeek,  who earned his sole Preakness victory with a filly, Swiss Skydiver (Daredevil), in the pandemic-postponed 2020 renewal.

The lightly raced colt was runner-up in his Gulfstream debut going seven panels in March and appeared to appreciate the step up to 1 1/16-miles for his Keeneland graduation Apr. 9. He handled the latest question with aplomb, taking a Churchill optional claimer May 7.

“What is it Wayne Gretzky said? 'You never make a shot you don't take,'” he said. “I've taken a couple of them and hit it, between [2002 Belmont winner] Sarava and Swiss.”

He continued, “Look, that's the fun of the sport. It's great being involved in these kinds of things. If you feel like you've got a legitimate chance to just hit the board, you can't be scared, because a lot happens.”

Also trying to repeat past exploits, trainer Chad Brown tries to add another Preakness title with Klaravich Stables' Early Voting (Gun Runner). The winner of his first two starts at Aqueduct, including an emphatic win in the GIII Withers S., the dark bay was caught late by Mo Donegal (Uncle Mo), finishing a neck back in second in the Apr. 9 GII Wood Memorial S.

In addition to Epicenter, Taylor Made Stallions' Not This Time is also represented by GII Fasig-Tipton Fountain of Youth S. winner Simplification. Third in the Apr. 2 GI Florida Derby, the Antonio Sano trainee finished fourth in the Kentucky Derby.

“In the Florida Derby, he was too close to the pace,” explained Sano. “In the [Kentucky] Derby, I wanted him to relax, but he was too far back.”

Calumet Farm's Happy Jack (Oxbow) will try to give his sire the Preakness double. In another connection between competitors, the Calumet stallion won the 2013 edition of the Preakness under the guidance of Lukas. A debut winner at Santa Anita in January, the bay later finished third in GII San Felipe S. and GI Santa Anita Derby before coming home in 14th in the Derby.

“He is fit and he is ready,” said Doug O'Neill, who previously won with I'll Have Another in 2012. “He is an ideal candidate to run back in two weeks. If you have a strong individual, it can be a real easy jump going from the Derby to the Preakness. I think he looks phenomenal. He was bucking and playing and walking the shed row Thursday afternoon and showed good energy on the track [Friday]. He seems like he is the best version of Happy Jack right now.”