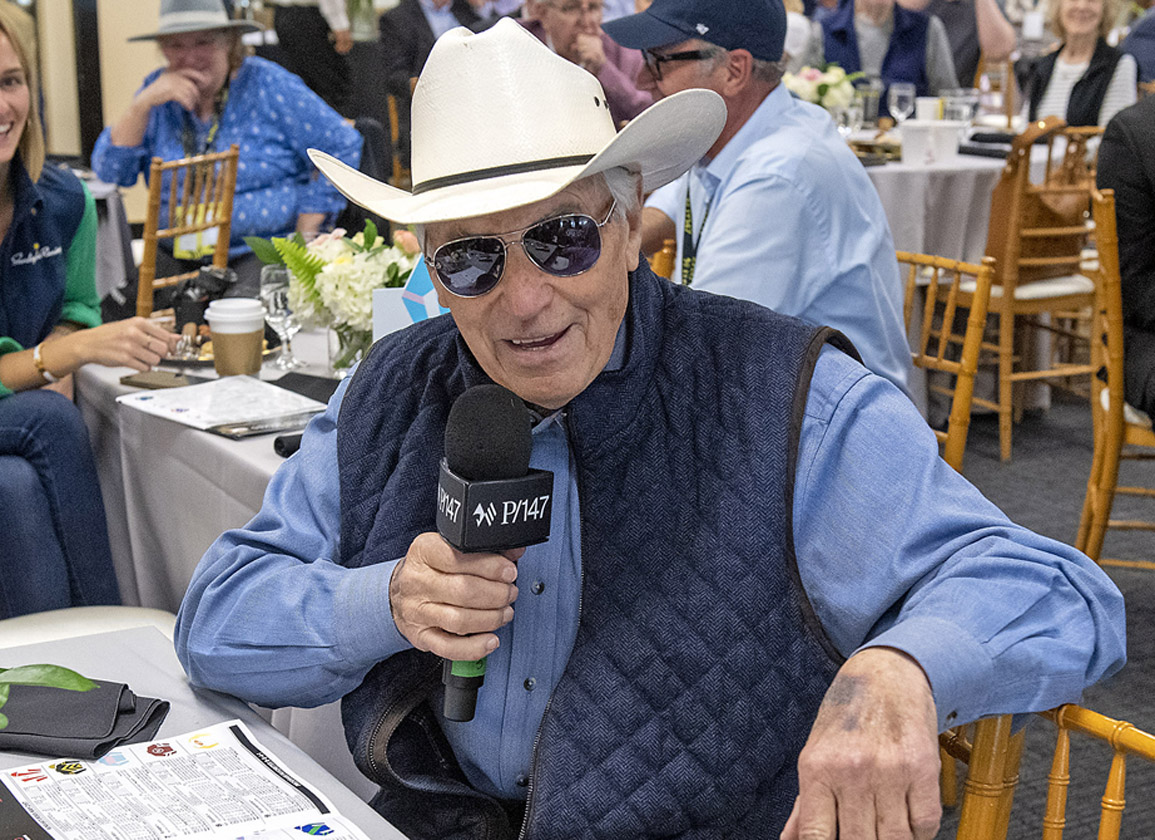 BALTIMORE, MD–In the continued lead up to Saturday's GI Preakness S., the intensity in the air, as well as the increasing media presence, grew noticeably denser Thursday morning at Pimlico. A couple of groups of fans could be seen milling around the Stakes Barn area, in addition to large clusters of media hoping to get in their final interviews in before a jam-packed weekend of racing.

Drawing a gaggle of reporters and interested onlookers, morningline favorite Epicenter (Not This Time), who continued with his usual routine and went out for a routine gallop, appeared to look the picture, glowing in health despite the overcast start to the morning.

Trainer Steve Asmussen, who has remained steadfast in his confidence in the Winchell Thoroughbreds runner following a runner-up finish in the May 7 GI Kentucky Derby, believes that the GII Risen Star and GII Louisiana Derby winner's main weapon in his arsenal is his consistency.

“He has been beautifully consistent in his training,” said Asmussen, who also won the Classic race in 2007 with Curlin and 2009 with Rachel Alexandra. “It was something I found remarkable leading up to the Derby; how consistent he's been a week out as he's been a month out.”

Asked how he's taken to the new surroundings, he added, “I really like how he settled in and how he looked going over the racetrack. That's what we were concerned about because he had been at Churchill and at the Fair Grounds–he was at home. But this will be the first time running here. From what we have seen from the last days on the racetrack, and his demeanor in the stall, he's been consistent. His appetite has been the same. He's been very relaxed going to the track, lively on the racetrack and he's cooled out comfortably. He's settled in very well.”

Also attracting a crowd, GI Kentucky Oaks heroine Secret Oath (Arrogate) continued to give her Hall of Fame trainer D. Wayne Lukas all the right signs in the lead up to her second encounter with colts following a third-place finish in the Apr. 2 GI Arkansas Derby. Lukas also has Ethereal Road (Quality Road) slated to run in the Sir Barton S. on the Preakness undercard.

Later in the morning, Pimlico hosted its traditional Preakness week Alibi Breakfast and Lukas showed why he remains ever popular, regaling the crowd with a few of his favorite jokes, including one playfully lobbed at fellow competitor Ken McPeek, who saddles Creative Minister (Creative Cause).

Lukas, who has won the iconic race on six prior occasions, reminisced his debut appearance with Codex in 1980.

“I came here from the Quarter Horse industry with Codex in 1980 and they put him in that first stall [far side of the first stakes barn],” recalled Lukas. “I sat there outside that tackroom and nobody even knew who we were.”

And that victory was not only memorable because it was his first, but also because of the drama associated with the controversial ride Angel Cordero Jr. gave the Tartan Stable-owned colt when besting that season's Kentucky Derby winner, filly Genuine Risk.

“Codex had to win it three times, once on the track, once in the steward's room and once with the commission,” he said. “That was a memorable experience.”

Only two trainers have won the race on more occasions than Lukas–R. Wydham Walden and Bob Baffert. The latter has been conspicuously absent from the Preakness proceedings over the last two season's following Medina Spirit's positive in the 2021 Kentucky Derby and the subsequent fallout, including a 90-day suspension which the trainer is currently serving. In previous years, Preakness week has served as a place for the two Hall of Famers to catch up, and Lukas offered a shout out to his absent friend.

“I was sitting on that chair this week and we left one chair for Baffert,” admitted Lukas. “We used to sit there and analyze the field and just talk. So, we sent a picture to Bob with me next to that one empty chair.”

Among the horsemen tipping their hats to Lukas yesterday, McPeek believes the lightly-raced Creative Minister has what it takes to compete at this level of competition he will face Saturday.

“You can't win one if you're not in one,” he said. “And a guy that I have the most respect for, Wayne, came over here many times and he was never scared to take a shot, so why should we. We realized we're taking a big gamble, but this is a really nice horse and I feel really good about his chances.”

Trainer Tim Yakteen, who marked his Triple Crown debut this year with a pair of runners at Churchill Downs earlier this month, will try to break through with Armagnac (Quality Road), a confident optional claimer winner at Santa Anita May 8.

“I think he ran a super race [last time] and we wanted to try and capitalize on that great race and see if he can get a piece of the pie or all of the pie here,” said Yakteen.

Also in attendance at Thursday's breakfast, Saffie Joeseph Jr., who will saddle Skippylongstocking (Exaggerator), makes only his second appearance at the Preakness following a ninth in the 2020 renewal with Ny Traffic (Cross Traffic).

“He's facing quality horses here, the Oaks winner, Epicenter, who probably ran the best race in the Derby and [GISW] Simplification [Not This Time], so it's a quality field. I know we're taking a chance. After watching the Derby, we thought he might have a chance to win it.”

Rounding out the conference, Joseph commented on the attraction in returning to Baltimore for the second jewel in racing's American Triple Crown.

“It's a really good atmosphere here,” he said. “We were here two years ago with no fans, so to get to see everybody on the backside and with fans back Saturday. We're looking forward to it.”