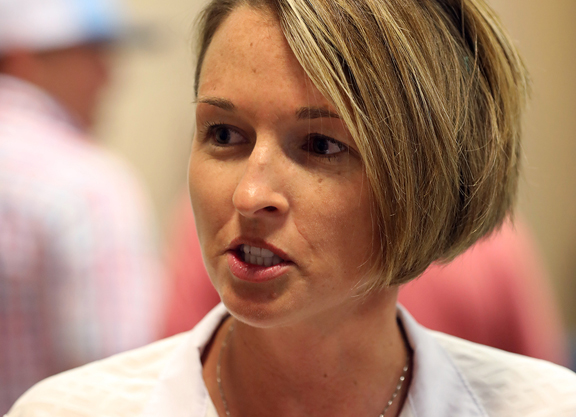 A filly by Practical Joke (hip 258) turned in the fastest quarter-mile work of Thursday's second session of the under-tack show for next week's Ocala Breeders' Sales Company's June Sale of 2-Year-Olds, stopping the clock in :21 1/5. The time matched the mark set by two juveniles during Wednesday's first day of the six-session breeze show.

“She was at the April sale and she was a little behind at that sale because she came up with an infection maybe a month out,” Top Line's Torie Gladwell said. “So we kind of used that sale as a prep for this sale, knowing more than likely that we were going to have to end up bringing her here. So she just wasn't ready for April. We took her over there and she breezed, but we ended up scratching her because she had a throat infection at the sale. So a couple of things went wrong and she ended up in June. We knew she should breeze well. She's a big, big filly and she has a monster stride and uses herself well, but she is really laid back, too. So we didn't know if she was going to give it her all today or just kind of do her thing. But she gave it her all and galloped out really fast, as well.”

Marc Tacher purchased the youngster for $130,000 at last year's Keeneland September sale. She was withdrawn from the Fasig-Tipton Gulfstream sale.

“These two are big, mature fillies,” Gladwell said. “They are not going to need time off.”

Top Line Sales has already enjoyed success with daughters of Practical Joke. The consignment sold a filly by Coolmore's first-crop sire for a sale-topping $750,000 at the OBS March sale and another filly by the sire for $500,000 at the Fasig-Tipton Gulfstream sale.

“They are both really laid-back fillies, which I love about them,” Gladwell said of the two June fillies. “They are smart, they eat good, they train good, and they are sound and happy. They like doing their jobs. And that's kind of been the same with the Practical Jokes all year for us.”

Of conditions during the first two days of the under-tack show, Gladwell said, “It rained yesterday and I think that tightened the track up just a little for everybody. It's been overcast, so it's not getting too hot on the horses. Hopefully it stays like this for tomorrow, Saturday and Sunday.”

Demand has been high for horses throughout this spring's juvenile sales and Gladwell hopes to see that trend continue with the final major 2-year-old auction of the year.

“There are plenty of people here and the ones that aren't here I'm sure will come and get their homework done from other people, they'll all kind of share notes,” Gladwell said. “I did talk to a couple of people who are going to Ascot that aren't coming. So we'll be lacking some buyers, but the good horses will still stand up and bring plenty of money.”

The under-tack show continues through Sunday with sessions beginning each day at 7:30 a.m. The June sale will be held next Wednesday through Friday. Bidding commences at 10:30 a.m. daily.