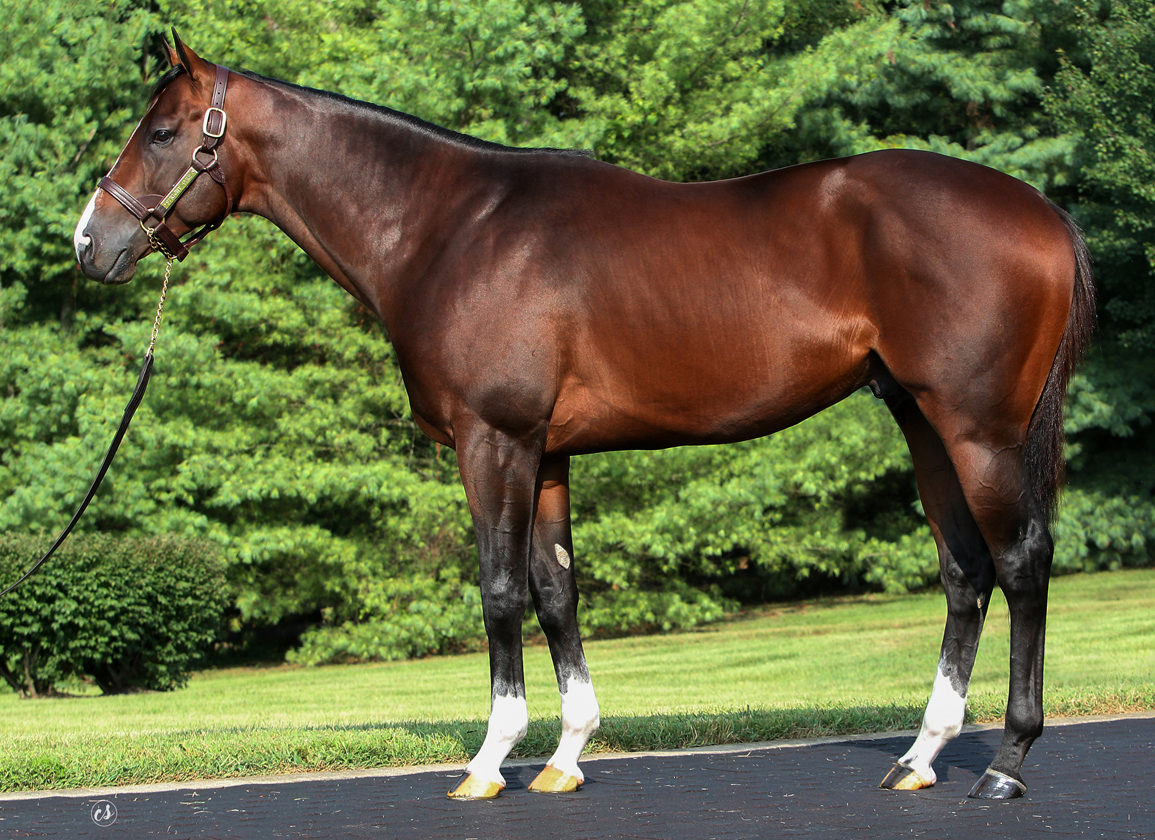 With just 26 named foals in his first crop, 'TDN Rising Star' Straight Fire (Dominus – Tricky Indy, by A.P. Indy) is reeling off some impressive statistics as his young stock are making waves in California.

Last year, the son of Dominus based at Legacy Ranch produced 10 winners from 13 runners with his first crop of 2-year-olds. So far in 2022, he has had six winners from 10 runners including dual stakes winner Straight Up G and also a pair of sophomores that swept the California-bred stakes on the Santa Anita Derby undercard earlier this month. Power Surge won the Evening Jewel S. and Smuggler's Run took the Echo Eddie S. while another son of Straight Fire, What in Blazes, finished third in the Echo Eddie.

Bred by Spendthrift Farm, Straight Fire was a $250,000 yearling purchase by Solis and Litt Bloodstock at the 2015 Fasig-Tipton July Sale. He was sent to Eddie Woods and showed promise from the start.

“We thought he was special,” Jason Litt recalled. “The horse always had a great attitude. He loved to train and was easy to be around. When we got him to the track, he was tremendously fast and naturally precocious.”

As a juvenile, the colt broke his maiden second time out at Del Mar by 10 ½ lengths to earn his 'Rising Star' badge. He was then second to MGSW Klimt (Quality Road) in the GI Del Mar Futurity and ran third in the GI FrontRunner S. While he suffered a career-ending injury and was unable to return to the starting gate as a 3-year-old, his connections were so impressed by his juvenile campaign that they pursued a stallion career for their precocious bay.

Straight Fire began his stallion career at Legacy Ranch in 2018 for a group of shareholders that included Legacy Ranch, Jim Rome's Jungle Racing, LNJ Foxwoods, Kim and Kevin Nish's KMN Racing, Andrew Molasky, Rigney Racing, Equine Analysis and Solis/Litt Bloodstock. In his first two years at stud, the stallion was solely supported by his shareholders and bred a total of 66 mares.

This year will look quite different for the stallion. After the success of his juveniles, Straight Fire's stud fee was increased from $3,500 to $7,500, but he already has 60 mares on his book this year coming in from an array of outside breeders.

Straight Fire's first crop did not see the sales ring as they were yearlings in 2020 so the owners opted to race them themselves to avoid the uncertain market during COVID. From Straight Fire's second crop of 20 foals, five yearlings saw the sales ring last year to average nearly $50,000. This year he was represented by a 2-year-old colt that delivered the fastest one-furlong breeze of the Texas 2-Year-Old in Training Sale and later sold for $80,000.

Litt explained that when they first launched Straight Fire's stud career, their goal was to produce quality runners for the lucrative 2-year-olds races at Del Mar. Now that the first crop has surpassed shareholders' original expectations as 2-year-olds, Litt said he believes there could be more to come this year for the stallion as his first crop continues to develop and his second crop hits the racetrack. 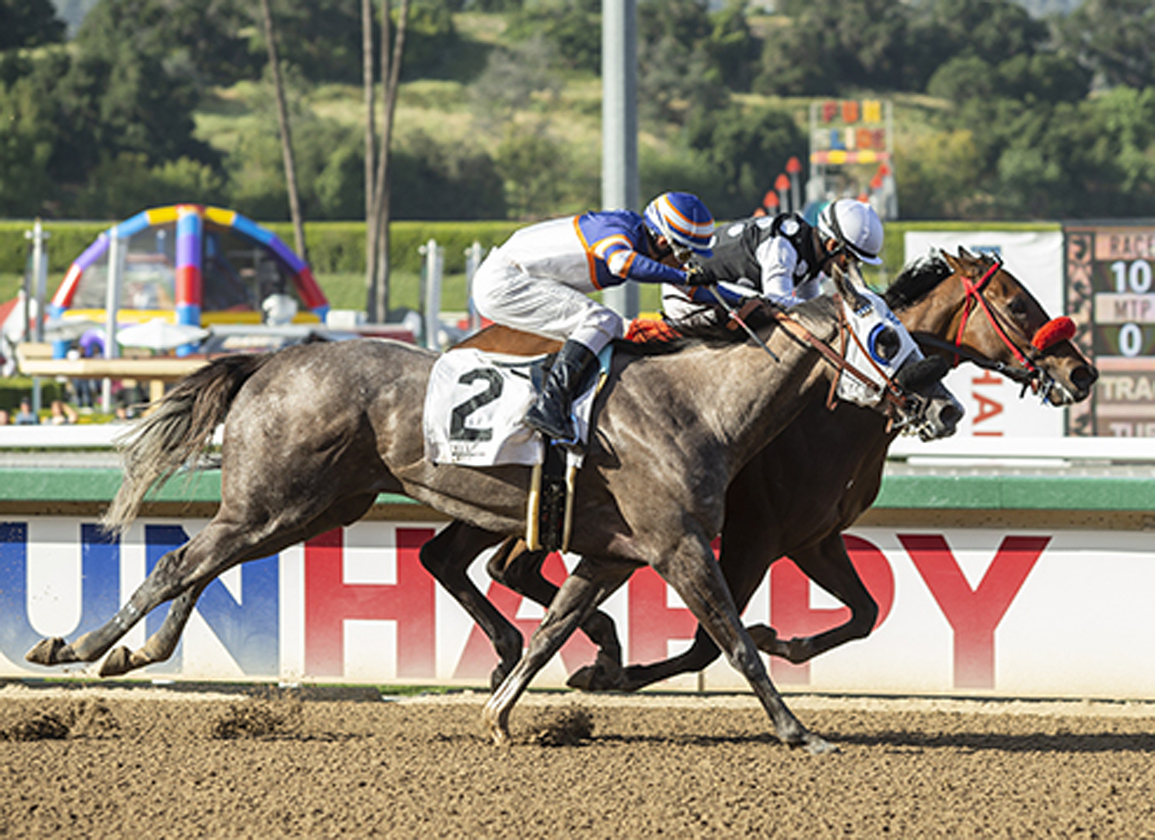 “His offspring are like him in that they have great minds, they love to train and they have tremendous natural speed,” he said. “If you watch their races, they instantly break on top naturally. It's one thing to get one good runner, but when there are five or six from a small crop that you're happy with, that's fun.”

Power Surge, winner of the Evening Jewel S., was part of the first crop that was sent to the racetrack rather than the sales ring. She was started by Susan Montanye of SBM Training, who broke several Straight Fire progeny for LNJ Foxwoods and their partners.

“She was very cool,” Montanye recalled. “She was very easy and always had a lot of game. That's how all of the Straight Fires have been for me.  Every time you ask them to do something, they always said yes and they are wanting to do more. They seem to be forward, early horses.”

The filly was sent to trainer Blaine Wright in California along with several other Straight Fire progeny.

“From early on we thought Power Surge was one of the best ones I had in my possession,” Wright recalled. “She was very precocious and has never done a thing wrong. I've pretty much had Straight Fire fillies up to this point, but the horse throws good bone and they're good-minded and tenacious.”

Power Surge broke her maiden at second asking as a juvenile last year. Since then, she has placed in all but one of her five career starts.

“As she has gotten more races into her, she has leveled out as a racehorse,” Wright explained. “Now she can turn it off pretty easy when you ask her in the morning and turn it back on when you want her to. She has ran well on synthetic, but she showed a different level on dirt in the stakes race. After watching her gallop out after that race, it looks like she might get up to a mile. She posted good fractions and did everything the right way.”

Power Surge will be the first horse of racing age by Straight Fire offered at auction when she sells as Hip 22 this week at the Fasig-Tipton April Digital Selected Sale, which closes Tuesday, April 26 at 2 p.m.  Litt explained that because the original intention was to sell Straight Fire's first crop, Power Surge's connections believe that now is the prime time to offer the filly after her stakes victory.

Wright believes the possibilities are endless with Power Surge for the remainder of her sophomore campaign and beyond.

“A filly like her, I think you could probably run her on any surface,” he said. “One thing you can't put into them is a racehorse, and she's got it.”