Posse Firster Graduates at the Spa 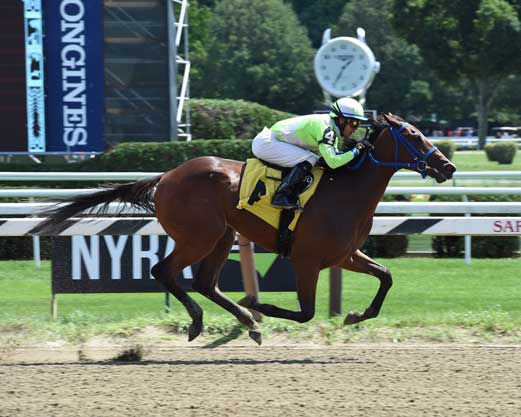 Gold for the King | Adam Coglianese

2nd-SAR, $73,000, (S), Msw, 8-8, 2yo, 6f, 1:10.80, ft.
+GOLD FOR THE KING (g, 2, Posse–Gold for the Queen {MSW, $239,136}, by Gold Token) took play throughout for this debut and backed up the money with a professional first-out score. Coming into this debut off a bullet five-furlong breeze Aug. 3 over the Oklahoma training track in 1:01 flat for the hot Charlton Baker barn, the bay gelding broke well at 42-10 and stalked favored Haul Anchor (Bernardini) from second through a :22.49 quarter-mile. Moving to attack that one at the top of the lane after a :45.68 half, Gold for the King took over from the favorite outside the furlong grounds and drew clear to a 3 1/4-length triumph. Haul Anchor dead-heated for second with Minsky Moment (Flatter). The winner's dam captured the New York Oaks at Finger Lakes as a sophomore and was second in Saratoga's Union Avenue S. as a 4-year-old. Lifetime Record: 1-1-0-0, $43,800. Click for the Equibase.com chart or VIDEO, sponsored by Fasig-Tipton.
O/B-Francis J. Paolangeli (NY); T-Charlton Baker.